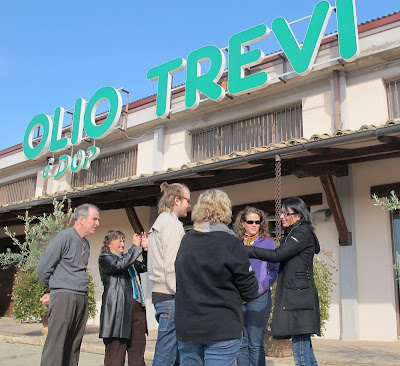 Sometimes it’s difficult to see something that’s right in front of your face until someone points it out to you.
That fact became obvious yesterday when we visited the Umbro-Roman hilltop town of Spoleto, a town we have visited numerous times before.  Yesterday was the first time we visited it with a tour guide. 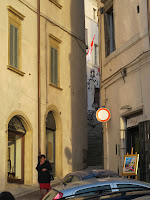 What a difference a guide makes.  Our previous visits to Spoleto were pleasant enough.  In fact this summer we were accompanied by our friend Simone, the chef-owner of our favorite restaurant in Bevagna and a native of Spoleto.  Simone gave us our most in depth glimpse of the town to date, but frankly we were more interested in seeing where he was born and grew up than learning about the archbishop or the Roman theater.
That changed yesterday with our guide Cinzia, who spent two hours under a perfect light blue sky taking us through the city’s founding, centuries before Christ to its Roman occupation, fast forwarding to its Lombard domination and later independence under Charlemagne, to the establishment of the archbishop’s authority under the Papal States.  It is a grand sweep of history that can be seen in the town’s architecture, tucked away underground, hidden down blind alleys, built over and painted over by “modern” buildings, all of which can be seen and appreciated but only if you know where to look and what to look for.  The secret of this fascinating town, which unlike so many historic Italian towns that are ossified museums, is that Spoleto is a living town and its riches are locked away, not in plain sight.   Life goes on in this cosmopolitan hilltown. 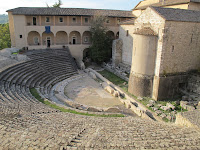 Cinzia, our guide for Spoleto and who will be our guide today in Montefalco, is a passionate teacher of the art, architecture and history of this town.  For a little over two hours she showed us treasures such as the Roman theater, the Roman archways that opened onto the via Flaminia, that ran from Rome to Fano and on to Rimini and the site of the ancient forum.  There we saw renaissance decoration on buildings that we had walked under without noticing countless times before, when our focus was not on history of this city, but rather its food and restaurants.  We spent time in most important churches of the town, soaking in the fresco of the life of the Virgin Mary by Fra Lippo Lippi in the Romanesque cathedral.  And at the end of our two hour meander we finished with the spectacular sight of the city’s immense acqueduct, a medieval architectural marvel that bridges the deep chasm that separates the town from nearby Monteluco. 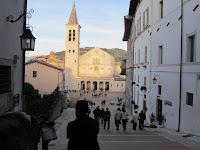 Spoleto is an ancient city and a modern city.  We will no doubt return many times in the future to enjoy its restauants, shops and street life.  But thanks to a beautiful fall day wandering its streets with a knowledgeable tourguide our view of the city, and our newfound appreciation for its richness, will forever be a part of our experience.
*                      *                      *
Sundays in Italy are a special day.  They are family days devoted not to an obligatory visit, a quick in and out with the family, but a long, leisurely get together free from the distractions of the work week.  Sundays always revolve around food, whether it is lingering lunch at a restaurant seated at a long table with members from at least three if not four generations dressed in their Sunday finest, or a simple affair at home.  It is a beautiful sight for an outsider to observe and is one of our favorite things about Italy.
This Sunday we made our way to Trevi, the overlooked hilltown between Spello and Spoleto and the epicenter of the Umbrian olive oil industry.
Here, stretching in either direction from Trevi along the hills that quickly become mountains, olive trees cover the landscape as far as the eye can see.  Literally.  As you drive along the SS3 superstrada, which runs along the base of the mountain from Perugia to Terni, you notice that the lush green mountains are covered from base to peak with rows of olive trees.  Thousands of them.  Tens of thousands of them.  Hundreds of thousands of them.  It would be interesting to do a census on the number of olive trees along this stretch of road.  No doubt the number would be in the millions. 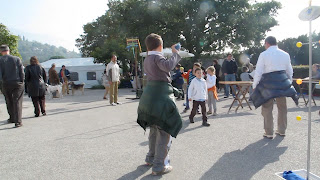 We are here, just below Trevi, at the Olio Trevi factory to take part in the New Oil Festival, an annual celebration of the beginning of the olive harvest and the pressing of the season’s first oil, the so-called olio novello.  We arrive at this little block party just before noon, the narrow access roads around the facility choked with parked cars, aromatic smoke whisping from outdoor fires and barbeques, the landscape transformed with a giant tent and all manner of carnival games for the kids.  This is a simple little festival, organized by our good friend Irene, the manager of the consortium that is Olio Trevi and whose family is the majority member of the consortium.  It is a simple festival but it is an important festival in the life of the people of Trevi.  For the residents here, olive oil is life. 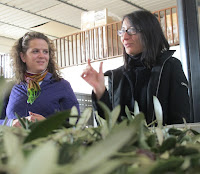 Upon arriving we bump into Irene whose excitement at the harvest and the strong turnout and festive atmosphere is palpable.  She is excited to talk about this year’s harvest, a significantly lower yield due to the summer’s weather but with a high quality of olives, and wants to show us the consortium’s new pressing equipment.  For the next half hour she proudly shows off enormous plastic crates, overflowing with freshly picked green and black olives destined for the crusher within hours of being transported from the nearby fields.  She shows us the shiny, new pressing and crushing equipment and notes how we cannot smell the olives in the crusher, as the new equipment is sealed to prevent the loss of aroma, which the Italians rightly call “perfume,” and other beneficial qualities of the olive.  And our eyes are drawn to the final centrifuge machine, from which a steady stream of green, almost neon olio novello gushes out.
After our tour we wander toward the food tent, sidetracked for a while at a table where bread is being toasted over a fire and literally dipped in the green gold.  If we never made it into the tent for our lunch the bruschetta would be a worthy substitute.  It is, after all, what we have come for.  We go back for seconds. 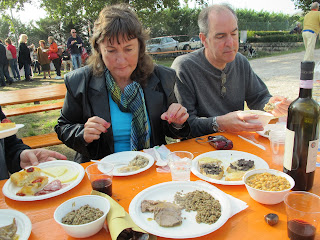 Then we brave the lunch line, where you place your order on a preprinted form and get in a cafeteria style line to fill your tray with simple dishes – polentas, soups, lentils, pastas and roasted meats.  We carry our trays outside to simple picnic tables under a soft, warming sun, bottles of wine and water in tow, and sit for the next hour and a half, enjoying the food, wine and especially the oil, but also the sight of families sitting together, people wandering the grounds listening to the group of musicians whose American music renditions float through the air and listening to the laughter of children playing throwing and hopping and chasing games in the makeshift playground.
Robert, one of our guests this week remarks how the scene reminds him of the local fall apple festival in his hometown a number of years back when his children were young.  He recounted those experiences fondly and noted that today he wouldn’t think of returning, as it had become too large, too commercial and had lost its soul.
As we enjoy a last piece of oil soaked bruschetta and the simple beauty of this scene, we can only hope, too, that this special day does not lose its soul.
Ci vediamo!
Bill and Suzy
Posted by Bill Menard at 2:17 PM