When we last left you, which was only yesterday, we were beating a retreat across the island of Sicily in our slightly wounded rental car, having attempted to fit it through a street just a bit narrower than its own width.  Although the front panel scraping and the subsequent backing into a parked car left my ego more bruised than our Lancia’s sheetmetal skin, by dinnertime we had arrived at our home for the next two nights, the estate of Gianfranco Becchina, producer of the award winning Olio Verde extravirgin olive oil in Castelvetrano.  Even under cloak of darkness, when we arrived at the Tenuta Pignatelli we knew we were in for a treat. 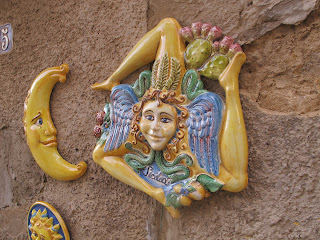 Erice is a magnet for visitors to Sicily.  For us it was simply a nice place to stroll the streets and soak in the lights of Trapani and the other towns that stretch and fade into the horizon below.  As we made our way back to Castelvetrano for the evening and an unforgettable dinner at the villa prepared by Gabriella and her assistant Natasha, the sense of calm, of peacefulness that we had sought from our brief visit to Sicily was already comfortably settling in on us.  It is nice to put yourselves in someone else’s hands, someone you can trust to make your experience relevant to place and at the same time fits your needs.  After our first day in Castelvetrano, a day when we did not accomplish much of anything, we accomplished a lot.  Just what we had been looking for.
Ci vediamo!
Bill and Suzy