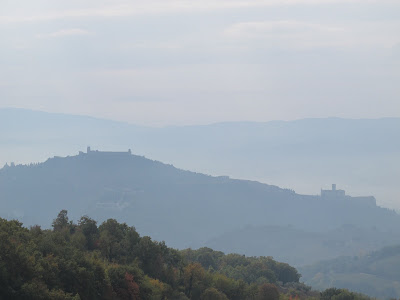 Two weeks and it’s time to pull up stakes and move on.  For just over two weeks we have been eating and drinking and touring and guiding, introducing two wonderful groups of fellow travellers, now known as friends, to the wonders that make up life in Umbria.  Two separate week-long Umbria Food and Wine tours.  It’s time to close the book on this year’s experience.  It has been memorable.
Today we leave behind la Fattoria del Gelso while Mariella and her crew work their magic and make it ready for the arrival of Kathy McCabe, editor of the Dream of Italy newsletter, as she welcomes her own tour group to the villa and begins to show them the wonders of Umbria.  For us, though, it is a short flight that awaits us, a hop from Rome’s Fuimicino airport to Catania on the island of Sicily.  For the next three nights we will make a quick march across this mystical and mysterious island, not even scratching its surface, but at least renewing friendships with old friends and taking in a few sights and meals along the way.  It is a good way to depressurize before returning home to America.
*                      *                      *
And although there is not much time to write before we are evicted from our own home, it would be a miscarriage of justice to not say a few words about our final day’s main activity, cooking class with Letizia at her fabulous agriturismo on the hills overlooking Assisi.
Letizia Mattiacci -- for the longest time we didn’t even know if she had a last name because one instantly takes to addressing her as Letizia -- is one of the first persons we met when we settled in Umbria after buying the villa.  Although a low key, uber genuine, straightforward gentlewoman, Letizia is known to just about everyone in this area as well as everyone who occupies cyberspace looking for things about and to do in Italy.  She is a tireless promoter of Umbria and her Assisi, a land she clearly loves and cares about.  She tirelessly gives online advice, on her blog and on the very useful and interesting website www.slowtrav, to anyone interested in learning about or visiting the area.
We initially met Letizia, not surprisingly, online.  And through her writing and her way of communicating we knew instantly that she was a person we should get to know and should want to get to know.  So in our first few visits to Umbria, we brought along our family and guests to spend a day cooking with Letizia.  And from those very first encounters we experienced some of what distinguishes Letizia so clearly.  Aside from the excellent cooking instruction and recipes, we were able to experience Letizia’s love for food and respect for the traditions that tie food and culture together.  She did this not through words so much as by example.  And what is totally ironic is that Letizia is not herself much of a gourmet, not much of an eater (unlike present company).  She simply seems to like to serve others and to share the time in the kitchen, guiding them on their culinary journey.
*                      *                      * 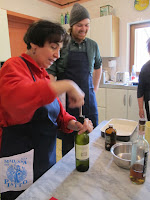 So yesterday’s cooking class was a homecoming of sorts.  It has been a couple of years since we last drove up to Terra Umbra, the gourmet shop or alimentari where Letizia meets and welcomes her guests and begins their Italian food education.  We arrived in Santa Maria degli Angeli nearly on time, unusual for our Food and Wine tour group, and were greeted on the shop’s doorstep by a smiling, diminutive Letizia.  It was indeed good to see her after so long an absence, and the reintroduction felt completely easy and natural.
Our group entered the shop where we were reintroduced to the store’s proprietor, Barbara, who has stocked this little space with an incredible array of the best foods Italy has to offer.  Everything there is unique, uniquely Italian and of the highest quality.  Letizia then introduced us to three American women who were staying at her agriturismo, two of whom would be joining us for the class.  Thus began our six hour cooking odyssey, an unhurried journey on which we learned about the traditions of the Italian kitchen, worked together on some delicious recipes and enjoyed an afternoon savoring our handiwork on the terrace of Letizia’s B&B overlooking the Basilica of St. Francis. 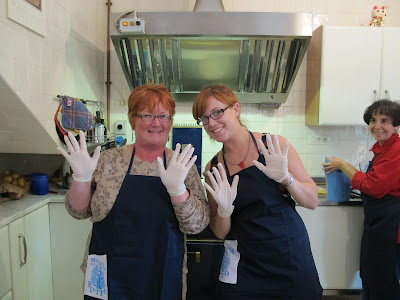 For those looking to gain an exposure to some of the essential elements that make up Italian cuisine, the first hour or so of Letizia’s class is a must.  In Barbara’s shop Letizia walked us through a tasting of Italy’s most beloved ingredients.  Olive oil, newly pressed this time of year was tasted and we compared different varieties of Umbrian oils to one another and olio novello compared to the same oil from the previous year.  Letizia had us all describe what we tasted, helping us begin to think about taste and describe it.  We tasted and learned about balsamico tradizionale, aged balsamic made in wooden casks and not at all resembling a typical salad dressing grade vinegar.  The Umbrian salumi or sliced meats that are so typical in this region were tasted and explained.  And different local cheeses were smelled and savored.  Then we chose all of the ingredients our group liked the most, bought a supply, said our goodbyes to Barbara and headed up the mountain to Letizia’s agriturismo, alla Madonna del Piatto.
The drive to the agriturismo takes you past Assisi, where you are treated to one of the best views of the city with the basilica towering above you.  The road then winds past and behind the city and through rolling hills on windy dirt road.  After about 15 minutes the road narrows and the agriturismo appears literally along the side of the road.  It is built into the side of a hill, the contour of which faces back toward Assisi, which is visible across the valley.  It is a sight of restrained beauty in a serene and tranquil country setting. 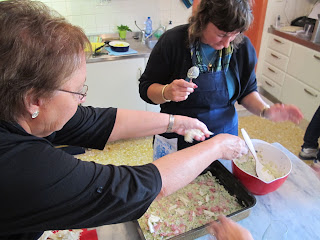 After arriving Letizia brought us out to her outdoor terrace, with the view of Assisi and left our group and our new friends from the Midwest with a couple of bottles of Grechetto to help break the ice while she prepared the kitchen for the class.  The Grechetto certainly did the trick and within minutes we were all chatting and joking, reciting our bios and comparing notes about life back home and, more frequently, what we loved about Italy.  Our new friends told tales of their time in Umbria and of Letizia’s hospitality.
After the kitchen had been prepared the class began in earnest.  The menu was not too overwhelming, which is the Italian way.  For the next hour and half we effortlessly chopped fresh vegetables and browned them, made béchamel sauce using Letizia’s microwave secret, boiled and blanched pasta sheets and assembled what, as we ate it on the terrace a short while later, was an epically delicious fresh lasagna.  This we enjoyed with a large plate of salumi that we had selected earlier at Terra Umbra as well as a selection of cheeses and honey.
The actual cooking was a relaxed and orderly affair, with Letizia gently getting everyone to participate, making sure that everyone was engaged and kept busy, doing a good job explaining what was going on and what was to come.  It was just the right mixture of work and play, and conversations erupted here and there, jokes flying and laughter wrapping all of it together.  The time in the kitchen floated by effortlessly and enjoyably.  Letizia made the effort fun. 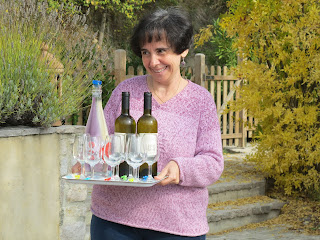 Especially when came to making the tiramisu.  A staple of the Italian kitchen, the ladyfinger and zabaglione dessert is a great way for a group to work together, lick a bowl and nibble on a wafer, while assembling one of the Italy’s most recognizable treats.  Such was the case yesterday and as this new group of friends tucked into their plates of tiramisu, and then a second, under a warming sun, the hazy outlines of the Basilica of San Francesco in Assisi visible across the valley, a smile was evident on everyone’s faces.  The same warm, easygoing smile that is Letizia.
Ci vediamo!
Bill and Suzy
Posted by Bill Menard at 6:05 AM

Fantastic description of a perfect day with Letizia-
A day with her is genuinely a slice of Umbrian paradise! And that tiramisu..... well, I will never taste a better one!