It is Monday, our first full day in Friuli, and we have planned a day trip exploring the Friuli coast from la Subida, the inn which will be our home for the next five days.  We arrived late in the afternoon the day before, having encountered a few "bumps" and disappointments along the way, but no matter, our real destination was la Subida, a complex of buildings just a few minutes from the village of Cormons, the center of the Collio wine district.
La Subida is the creation of Josko Sirk, a local Cormons vinegar producer and one of the leaders of Piccolo Collio, an association of artisinal producers of local specialties that have banded together to promote gastronomic tourism in this somewhat overlooked region.  The prior evening we had met Josko and gotten the lay of the land of La Subida, which is divided into two main properties by the main road from Cormons.  Our apartments, nestled among the trees and other lush vegetation in a cluster of houses across the the road from the main building are large and furnished with rustic furnishings and decorations, spread out over two floors, with a small kitchen and a refrigerator thoughtfully stocked with a bottle of the local wine.  It is a relaxing setup and we find ourselves instantly overcome by a sense of peace.

The prior evening Suzy, Nancy, Pete and I enjoy a small dinner at la Subida's Osteria, an informal restaurant with outdoor benches just a few paces from our rooms and settle in for a good night sleep before our departure the next morning for Grado and Aquileia on the coast.  Shortly after turning in, however, the most violent thunderstorm in recorded history rumbled into the area and decided to park directly over our apartments for a couple of hours, hurling thunderbolts into the adjacent trees, occasionally cooling off the mayhem with torrential rains and then returning to the flash and bang that keeps each of us up most of the night.  The following morning, bleary and dreary eyed we compare notes about our respective nightmares and phobias of arcs of electricity jumping from our piles of consumer electronics (mostly by Apple) and killing us in our sleep.  There is a palpable lack of energy among our group as we begin our drive to the coast.  But at least the tempest has brought cooler weather with it. 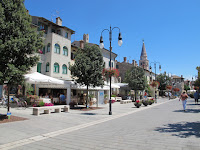 The drive to Aquileia is a relaxed, meandering 45 minute drive through a variety of ecoscapes.  We arrive in the little village and pass through, deciding to head directly to the seaside town of Grado first, passing through the ruins of Aquileia's ancient Roman forum, which is bisected by the narrow two lane road.  A few minutes later Grado emerges before us, a long island connected to mainland by a narrow isthmus (jingle all the way) that traverses the same lagoon that surrounds Venice.  In fact the scene has a certain Venetian feel, in look and color, with the dark green water of the lagoon churning from the strong winds that buffet the defenseless island.  When we arrive in the town of Grado the scene is much more tranquil.  The sunspashed streets glimmer, clean, modern buildings flanked with well kept older ones, the streets wide and straight and everywhere flowers.  Boxes along the streets overflowing with purple and pink flowers, beds surrounding trees, window boxes in windows along the street.  The whole scene feels slightly Germanic or Swiss. 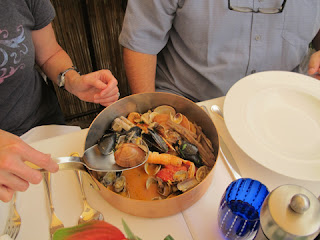 We wander the pedestrian streets for a few moments and finally come across our destination, the Ristorante all'Androna, reputedly one of Grado's best seafood restaurants.  It is only a few minutes after 2:00 but the restaurant has just closed its kitchen.  Some polite begging by Pete, however, does the trick, the waiter reluctantly agrees to serve us and shows us to an elegant outdoor table just across the street from the wood panelled restaurant in a neat square flanked with stone buildings and covered with an enormous umbrella.  The restaurant surely must be one of Grado's best and it is a great introduction to this city. 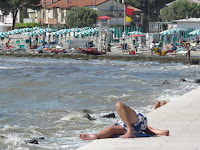 After lunch we stroll down to the beach, just a few blocks from the restaurant.  We walk along the narrow walkway that itself serves partly as conduit, partly as beach, with sunbathers taking up spots along its stone course.  Others lie on the narrow steps that lead down to the manmade beach that is protected from the rough surf by a seawall of boulders.  Tucked here and there bathers are using whatever small bits of real estate that is available to snatch some sun. Further down a sandy beach that is really more a muddy beach choked with piles of seaweed stretches out, with rows of umbrellas and beach chairs. 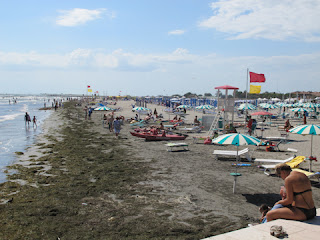 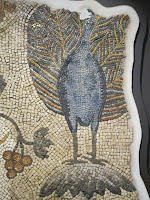 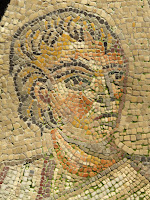 We say goodbye to Grado and drive back to Aquileia along a different road, arriving a short while later at the town's historic basilica.  Although we had never heard of it before, Aquileia was quite the important Roman frontier town, the second city in the empire by some accounts, owing to its frontier location and the importance of trade with the east.  This accounts for the ruins that flank the highway but not the basilica.  In the later period of the Empire, Aquileia became an important religious town, invested by the Catholic church with a patriarch who built the great basilica decorated with paleochristian Roman mosaics.  Its importance waned after the town was sacked by Atilla the Hun in the 400s (and its inhabitants fled to Grado, where they established a brisk trade in beach chairs and umbrellas), but it remains today one of the most important historic sites in Friuli.  We arrived on a Monday when the archeological museum was closed, but without doubt one could spend an entire day viewing just the mosaic floors of the basilica and the adjoining baptistry.  Back in February Suzy and I visited Ravenna, a UNESCO site famous for its mosaics.  Aquileia, even on an abbreviated visit such as ours, is every bit as impressive.

Exhausted from all of this culture and history, we make a brief detour on our drive back to la Subida for, what else, grappa.  Friuli is one of the centers of Italy's grappa industry, perhaps itself an outgrowth of the barbarian invasions, and we are fortunate that one of the smaller producers, the Distilleria Aquileia, is just a few hundred yards up the road.  We sample some different types of grappa, continue our daylong commitment to self education by learning the differences between grappa and aquavite and are soon back on the road, proving firsthand the old Italian expression that nothing goes together like mosaics and grappa.

Our final adventure for the day is dinner at the second of La Subida's two restaurants, the more upscale Trattoria del Cacciatore.  This restaurant, in the main building of the inn, is more elegant than the osteria across the street, but retains the simple informal atmosphere that seems to pervade Friuli.  But the meal is nothing if not first class.  For the next three hours we indulge ourselves with nearly everything the restaurant has to offer, beginning our education into the local food culture and continuing our education in Collio wines.  It is a gastronomic tour de force that is comfortable, at ease, filling and completely satisfying.  Just like everything here in Friuli.

Not to beat a dead horse (especially when one can eat one instead), but I do think a bit of recounting of the evening's menu, as best as we can remember it after falling into a food coma afterwards, is in order. So here it is, in 1000 words or less (thank goodness this is a blog and not a tweet). We start with a lic lic, a round frico (fried cheese) on a stick, like a lollipop (hence the Italian name for sucker). Suzy's antipasti is foie gras topped with smoked trout on a small bun, looking like a slider. Delicious. Pete has a plate of hand sliced prosciutto from the local prosciutteria, d'Osvaldo, while Nancy feasts on zucchini flower buds (the green part, not the orange flower) and I start with a vegetable timbale. For primi, we have a soup with a breadcrumbs pasta, farfalle in a brown butter sauce and two show stoppers - a G8 pasta, so named because it was served to the world's leaders at the G8 summit held in Italy (a whole wheat pasta with garden vegetables and a whiff of anchovy) and a tureen of mushrooms, including fresh wild porcini, served in what amounts to a terrarium. By this point the excellent wine steward has steered us through a number of bottles of the Collio's most interesting wines, discreetly keeping us from making novice mistakes like following a tocai (friulano) with a ribolla gialla. Oh, you Americans. Really.

Heading down the home stretch it's Pete leading by a nose, with cinghiale chops, Bill and Nancy tiring but game with garlic scented lamb chops. Suzy charges on the outside rail, showing a burst at the finish with a stinco, which from the size alone (about the size of a Fiat 500) must loosely translated mean brontosaurus burger in pork. It is a derby for the ages. Bottles of grappa are popped and winner and loser alike are showered in it in a glorious celebration. In Italy eating is truly the sport of kings. And tonight we have eaten like royalty.

When we finally stumble out of the restaurant after midnight, having left behind an empty grappa bottle the size of a delta rocket, the gods of Collio must be watching over us, protecting us from cars driving along the road that bisects the property, driven by locals probably pretty much in the same shape behind the wheel as we are on foot.  We struggle up the stairs to our apartments, say good night and settle into a deep sleep, this time uninterrupted by lightning and thunder (although it surely would have been far less a problem this evening) and smiling from our wonderful first day introduction to la Subida and Friuli.