Buzzing along the winding roads of the Collio on a Vespa is about the most exhilerating thrill and sense of freedom imaginable.  Except perhaps sunbathing in the nude.  But the risk of a nasty sunburn is much lower, especially if you wear your helmet. 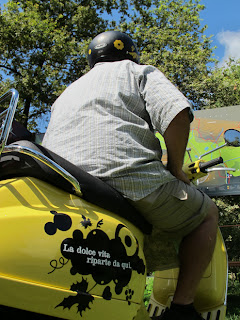 The morning of our departure for our trip to Italy the Travel section of the Sunday New York Times featured an article called In Italy, Vineyards by Vespa.  The article chronicled the author's and her husband's adventures in the Collio wine region on Vespas, the iconic Italian motor scooter.   I absolutely loved the way the article captured the dolce vita spirit of the region, which Suzy and I had visited for the first time just a few months earlier, but I must admit that I felt a little pang of remorse when reading the article.  We had discovered the Collio Vespas on our previous trip but did not have enough time to try them out and had planned to do so on this trip.  Now we risked looking like Johnny come latelies.  In fact, much of what Ingrid Williams wrote about - the Vespas, Josko Sirk, la Subida, Castello di Spessa, the Enoteca di Cormons - were part of our itinerary, planned long before the article was published, or we had written about during our previous trip.  It's as though she had been reading our blog and following in our footsteps.  It wouldn't be the first time the New York Times engaged in a bit of plagiarism!

On our last full day in Friuli Pete and I had decided to avail ourselves of the offer from our hotel's management to use their two bright yellow Vespas to explore the nearby hills.  The Vespas, we had been told at check in "sono sempre alla tua dispozitione" - are at your disposal - and we had confirmed their booking the previous evening.  Our hotel/lodge, la Subida, is at the epicenter of the Collio tourism movement and I believe the yellow Vespas with the Collio logo on the front that one sees buzzing around the area's designed-for-Vespa roads are at least in part the brainchild of our host, the vinegar making Josko Sirk.  Regardless of who is responsible, it is a superb idea.  And it's free.  Now that's novel.

We arrive in the morning to start our adventure and fill out an Italian-style liability waiver.  It is about two sentences long and requires you pretty much to insert your name and sign.  The Italians have not yet let the legal process suck the fun out of life.  We are shown a couple of possible itineraries which are printed in an extensive booklet that is given away at every establishment in the Collio.  In fact, we have amassed nearly a dozen of these 30 page booklets in our room, but we take another for the journey, so we'll have some maps and some ideas about where to go. 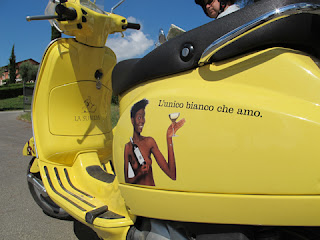 Our US drivers licenses are sufficient to begin our adventure.  No international drivers license is required, but without a motorcycle license (which I have, in order to ride my Vespa back in Washington) it is not possible to pass into Slovenia. No experience is required in order to use bikes, either, and it is fortunate that I have experience operating Vespas (la Subida's models are the same as mine back home), as there are a few too many buttons for the uninitiated to remember how to use.  (For example, in order to start the bike, you have to squeeze the hand brake, press the starter switch and, for good measure, twist the throttle.  Failure to squeeze the hand brake results in complete silence, not a great state of affairs if you have stopped along the way to take a picture).

We wobble out of the hotel's courtyard and edge our way onto the two lane road that will take us to Nirvana for the next three hours.  We throttle up and off we go, the familiar high pitched buzz that gives the name to Vespa (which means wasp in Italian) echoing off the rows of grapes that border the road.  The roads here seem tailor made for this mode of transportation.  There is very little traffic - an occasional car or truck but more often a serious biker, clad in colorful, logo-covered spandex, gently winding roads that are for the most part flawlessly paved and breathtaking panoramas.  In fact, if there is one problem with all of this it is that the countryside is so beautiful you tend to get caught up in it, when focusing on the driving might be a better idea.  But the Vespa is so easy to operate and the speeds so benign that it is a tradeoff well worth making.

As much thought as I have given to trying to describe the feeling of utter contentment that we feel as we wind up and down, past small farms and immaculate vineyards, over the tops of wooded hills and along the basins of streams in long flat valleys, I have to admit defeat and give up.  It is a feeling that is simply indescribable.  I think Pete may have stumbled upon a close approximation when, despite being a nearly full time world traveller, he said to me as we stopped to check the map, "this is awesome, man.  This is the most fun I have had in years."  I couldn't agree more. 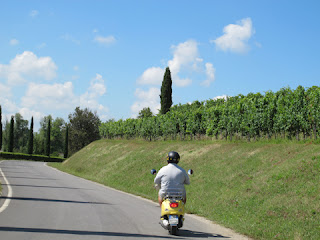 Thank you, Josko Sirk, thank you Piccolo Collio for sharing your homeland with us and for letting us see it at ground level at a pace that truly gives meaning to la dolce vita.

YOU guys are so brave!!