Our story of joy continues on Thursday with our group's early departure for the Arnaldo Caprai vineyard, a grand and elegant cantina located on a commanding hill between Bevagna and Montefalco.
Caprai is generally credited with, if not in actuality being the creator of Sagrantino secco, the dry red wine made from the Montefalco D.O.C.G. zone's sagrantino grape.  At the very least, Caprai is the party most responsible for making Sagrantino wine the most important wine in Umbria.  But despite the excellent pedigree of this winery, the purpose of our visit is not to taste wines.  It is to spend the day with one of the most beloved chefs in Umbria, the Sicilian born Salvatore Denaro. 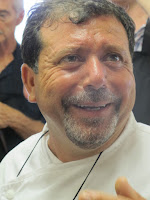 Salvatore Denaro - within moments anyone who encounters this enchanting man calls him simply Salvatore, regardless of whether or not the visitor speaks Italian - is one of the most well known chefs in Umbria.  And although he is without doubt a great chef, it is the force of his personality that has won him his well deserved fame and his unwavering following.  To know Salvatore is to love him.  Instantly.

We first met Salvatore several years ago, even before purchasing our villa in Cannara, while staying at the beautiful villa of our friends Paula and Edward located just outside the village of Todi.  As memorable as Paula and Edward's generosity in inviting us to stay there was, it was Paula's words of advice to us before arriving that were an even greater gift.  "You must have a meal at il Bacco Felice in Foligno and tell the chef/owner, a real character by the name of Salvatore, that Paula sends her regards."  Armed with that simple instruction we hunted down Foligno and found the Bacco Felice, having been warned that it would be an unusual experience in a slightly unusual surrounding.  We wandered down the rambling, tumble down streets of Foligno and arrived at a door with a large, lifesized photograph of a smiling chef with a bottle and glass in his hand and reprints from Town and Country and other American and European magazines featuring the restaurant.  We had arrived at il Bacco Felice, the happy Bacchus.  And a moment later we met that bacco felice himself, the bearded, slightly disheveled Salvatore Denaro.  In an instant we were being shown to a table, as we delivered our message from Paula.  Before we had been seated we were calling him Salvatore.

That was the first of many meals we enjoyed at the Bacco Felice, mostly with friends in tow so they could meet this most excellent creature.  He had a way of making food (and wine) transport you into his world, a slightly topsy turvy place where all cares disappeared and all troubles were forgotten.  During the hours that we would spend a tavola at il Bacco Felice, with Salvatore emerging from the kitchen humming a song and pulling up a chair to enjoy a glass of wine (from our bottle) or a bite of his excellent cooking (from our plates), he invited us into a special place.  Salvatore's world.  No one ever wanted to leave.

We arrived at the Caprai vineyard and after taking a coffee in the cantina's beautiful tasting room were taken upstairs to the kitchen.  What awaited us was an ideal place for spending the day cooking - a huge table with individual workspaces, all of the kitchen equipment, cutlery, plates and glasses you could ever want or need and a breathtaking view out a large picture window of the Valle d'Umbria below, with views of Trevi and Spello in the distance.  A few moments later Salvatore entered and introduced himself to everyone.  A few moments later everyone was calling him Salvatore, as though they had known him their entire lives.  And within a few more moments he knew everyone's name and story.  I don't think he is capable of forgetting a detail about another person.

Salvatore's cooking is instinctual.  He likes to cook what he likes to eat and, in Micheal Pollan's words, he likes to eat food.  Food, as opposed to foodlike substances.  Salvatore works with and worships the natural.  When he speaks about a tomato or slices it open, his eyes twinkle like he is seeing it and experiencing it for the very first time.  And when he offers it to you, completely fresh, completely unadulterated, dressed simply with a drizzle of extravirgin olive oil your eyes twinkle.  And even if you really are experiencing it for the very first time you experience it just as he did.  Through this act of sharing he brings you through that magic window into his world.  He teaches you to fly.

Our menu for the day consisted of melanzane.  Eggplant.  Aubergine.  The purple vegetable that was brought from Africa to Italy.  One ingredient, three dishes.  Five hours.  An unmentionable number of bottles of wine.  Chopping, cutting, singing, frying, laughing, slicing, kissing, flying.  Not a cooking class, but a journey.  A journey with a tourguide that we all put our faith in and didn't want to leave. 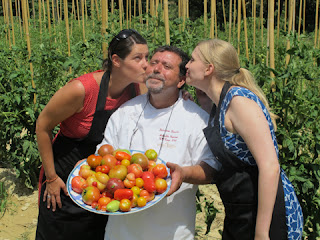 Around my family, I am famous for saying that I don't like eggplant.  And in truth, I never have cared for its texture, even if the taste was palatable to me.   But nearly every time I eat it I am told by my family that the reaction is the same.  I will say, "I don't generally like eggplant, but this isn't too bad."  After our day of magic with our elven chef, I can say that I love eggplant.  I love eggplant because I respect it the way Salvatore does, not because he told me to do so, but because he made me do it.  He made me want to do it.  Henceforth aubergine, eggplant will be my Lucky Charms.  Magically delicious.

After a day of cooking with Salvatore, we returned to the villa for a dip in the pool before heading to Perugia for the musical highlight, at least for this group of guests, of our week at Umbria Jazz.  Brazil night featuring Sergio Mendez and Gilberto Gil.

We arrived in Perugia's Santa Giuliana arena, the large athletic grounds just outside the city's main center where Umbria Jazz's main stage is set up for nightly headliner concerts.  Our "abbreviated" schedule this season had taken us to a Miles Davis tribute, featuring Herbie Hancock, Wayne Shorter and Marcus Miller and a standing room only performance by Carlos Santana in addition to this evening's Brazilian jazz concert.  Along the way we skipped performances by Ahmad Jamal, Branford Marsalis and Liza Minelli.  This evening's performance was, however, the one I was most looking forward to and as we arrived at the gate about 10 minutes before curtain time, the arena looked mostly empty.  Knowing how much the Italians like the Brazilian music (from prior year's concerts), I was surprised but guessed it would be a late arriving crowd.  How right I was, as a half hour later as the curtains rose on Gilberto Gil the stadium was completely sold out and the atmosphere so electric you could recharge your cellphone or the camera or camcorder that you smuggled in to get a souvenir of the evening.

Gil opened for Sergio Mendez, but it should have been the other way.  When the aged Sergio Mendez took the stage after intermission he thrilled the crowd with a set of popular songs that spanned the gamut of Brazilian jazz.  It was a crowd pleaser but in a way the crowd seemed to be there partly to pay homage to a man who had introduced many of them to the world of Brazilian jazz in the 1960s and beyond.  It was a terrific performance in every respect.

But Gilberto Gil was not even in the same stadium as Mendez.  He completely captivated the audience with every string on his guitar, every shuffle or stomp of his foot, every note from his heavenly vocal chords and every whistle, click and hoot that joyously makes his music his and ours.  His is a music of pure joy and when I say pure it is the definition of pure.  Every movement, every sound, every expression, every word is joy.  There is nothing extraneous, there is nothing lacking.  If you took out one note or added one chord it would not be as perfect as it was.  And if he played for you the next night and did it completely differently it would be as completely perfect and as completely joyous.  Gilberto Gil has discovered a pathway from himself, his instrument and his voice into your soul.  It is direct and complete and awakens the joy within.  It is a gift.

But even when Gil was not playing happy songs that made the Santa Giuliana crowd mob the stage and sway and dance he still spoke directly to the soul.  For a brief detour he performed two songs that he introduced as more passionate and deep.  He could have described them as soulful because while some in the crowd continued to sway their hips as the volume lowered, Gil's soft voice spoke directly and individually to each person in the audience.  He was performing thousands of individual concerts in the arena of each person's mind and soul.  It is a gift.  And it is a gift that perfectly wrapped up two frenetic day of joy.

La dolce vita translates literally into "the sweet life."  But people who have experienced Italy and life among these lovely people assign to that vague term their own particular meaning, based on what they have experienced.  Over the past two days we have experienced joy in many forms.  The joy of the Pardi family whose selfless welcoming is like the comfort one finds in one's one family.  The joy of Salvatore is the joy of being taken by the hand and going to a special place of discovery.  And the joy of Gilberto Gil is the joy of hearing beauty within yourself.  Imagine the honor of being able to experience all of these types of joy in a span of 36 hours.  For me, that is la dolce vita.

Ci vediamo!
Bill and Suzy
Posted by Bill Menard at 3:16 AM

Hi Bill and Suzy,
I'm a Slow Trav member and I ran into the link to your blog on the Slow Travel site. I LOVE the pictures of the tomatoes and I'd like to find out how you get the fancy picture flipping thing on your blog....? Sorry, don't know what to call it. I'd love one on my blog. My blog is with wordpress. Do you know if that's possible?
http://italiandreams.wordpress.com