Words cannot accurately describe Carnevale, and so at the going rate of one thousand words per (even after giving effect to the weakness in the Dollar) I should be able to meet my daily quota quite nicely.

One of the great joys we have had during our too brief first experience at Carnevale has been to walk about this city in costume. On the day after attending the grand ball at the Danieli, we decided to get our money's worth on our costume rental, wearing the around town all day before returning them. Being a Monday, the crowds were much smaller then over the weekend and stilll being quite far from Fat Tuesday, there was a lesser sense of Carnevale. Taken together, it meant that Suzy and I were about the only two people in Venice sporting Carnevale costumes, at least during the day. We drew quite a bit of attention and got our picture taken a great deal. 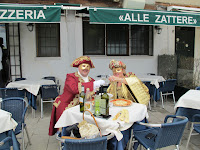 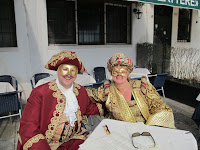 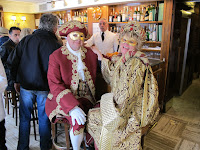 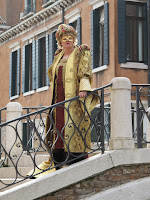 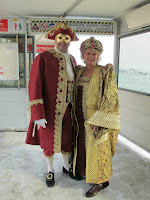 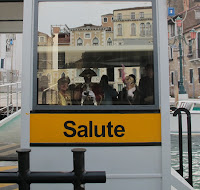 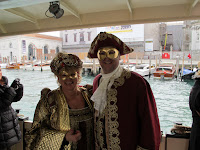 It is funny how people take your picture in costume. Some ask if they can photograph you and have you pose. Others pretend to be taking a picture of something nearby and then quickly snap a photo of you, hoping that you don't notice.

Yesterday, wanting to dress for our evening's activity - a Venetian pub crawl - we went the low budget route (compared to our rental for the grand ball we attended our first evening here), renting a cape and buying a couple masks at an outdoor costumery in a nearby piazza. There were more people dressed in costume, particularly around Piazza San Marco. 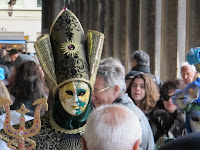 Our evening activity was an organized Venetian pub crawl. Due to the cold weather we had a small group - only 7 guests along with our two hosts. Although it had the potential to be a cheesy affair, it was actually quite nice, introducing us to some of the more atmospheric bars in Venice, where we enjoyed an ombra (a glass of wine or aperitif) and cicchetti (finger food). Although only one of our co-crawlers was in costume (we never got to see what she (or he) looked like), the company was lovely - a bunch of anglo saxons from the UK and Ireland. 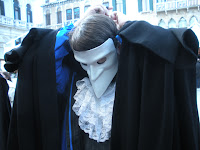 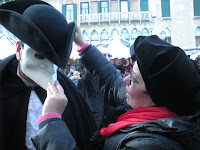 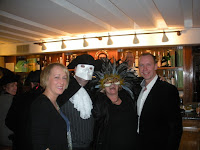 After the crawl we barely made it back to Harry's Bar where we had arranged to meet a lovely couple from England that we had met at Harry's a couple of days prior. After polishing off a few we decided to grab a bite to eat and upon entering the restaurant were recognized by Irish couple from the pub crawl. I guess these costumes just don't work!


Ci vediamo!
Bill and Suzy
Posted by Bill Menard at 3:56 AM