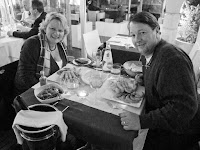 As we leave behind northern Italy for the center, the vast, melancholy plains of the Veneto for the fecund ones of Emilia Romagna, we continue south along the coast, reaching into Le Marche, our destination for the next couple of days.


Le Marche is one of the relatively smaller Italian provinces, but one rich in diversity, with towering mountains and miles of coastline, much of it dotted with fishing villages and summer beach resorts. For today we are sticking to the coast, our appointment with destiny in the form of seafood.

One could joke that we have been on a seafood diet this entire trip ("you see food, you eat it"), and we have had quite a few excellent seafood meals over the past two weeks. But it is qualitatively different to eat fresh seafood served in a restaurant in, say, Venice, from the experience of chowing down on fresh seafood in a restaurant, which from your table you can see boats offloading crates of still twitching shrimp, crawfish, lobster, calamari and all manner of fish. Where you can hear the crashing of the waves on the shore through the window. Where your fellow diners look, dress (and smell) like Bluto from the Popeye cartoon.
That is where we have landed today.

Our lunch stop is not in Le Marche but just south of Ravenna in Emilia Romagna, in a small fishing village called Cesenatico, a few kilometers from the famous salt producing town of Cervia. We had visited Cervia several years ago, taking in the town's salt museum and enjoying a memorable seafood lunch with a not-too-memorable setting. In contrast, Cesenatico is the perfect Hollywood set for the perfect seafood meal, and our restaurant, the Osteria del Gran Fritto, is one of a number of lovely restaurants set along either side of a canal, lined with colorful fishing boats, leading out to the sea.

The Osteria, a well known restaurant managed by Stefano Bartolini, was recommended to us by our friend and supplier of Italian gourmet food products, Andrea Tosolini, who came across the restaurant during his visits to his native Italy searching for quality products to import to the U.S. This is not the first restaurant recommendation we have received from Andrea, and he has yet to disappoint.

It is a cold day, I would argue (and have argued with Suzy) miserably so, especially along the canal, with the wind howling and slicing through our coats, a stinging rain like tiny needles to the face. But it was all warmth and good feeling as we entered the colorful, whimsical Osteria.

Our dinner plan for the night was simple. After lunch we had driven a couple hours south, into Le Marche, and checked into the Grand Hotel Excelsior, a beach resort in the resort town of Senigallia, along Le Marche's coast. Travelling as we often do off season, we are used to checking into abandoned resorts, mostly shuttered and empty of guests, but the Excelsior is particularly creepy at this time of year, its enormous front lobby completely empty, the hallways slightly run down and awaiting a little refurbishment before the beach season begins in a few months. The whole scene slightly echoes the resort Jack Nicholson housesat for in the Shining.

But we were in Senigallia not for the beach nor for the Excelsior Grand. We had come to eat seafood at Uliassi, the highly acclaimed restaurant of Mauro Uliassi, recommended to us by Fabio Trabocchi, the similarly acclaimed Washington, DC chef in whose upcoming restaurant - Fiola - we are small investors. We had been warned by Fabio to confirm that the restaurant was open during the winter, so I dutifully did so, checking the restaurant's website and finding out its winter opening hours. Only after arriving at the front door and finding the windows papered over and sandbags stacked in front of the doorway  did we re-learn the lesson that businesses don't always update their websites. Closed until the end of March.

But in this new loosey-goosey phase of our trip (see yesterday's report) not all is lost when things do not go according to plan. This is especially if there is no plan. Next door to Uliassi was an inviting restaurant called l'Ancora (the Anchor) with something that Uliassi did not have - a working kitchen, a wait staff and patrons. Within seconds we counted ourselves among the latter group.

I have saved the food description for last, intentionally having skipped from our entering the Osteria del Gran Fritto and l'Ancora (much like Kubrick abruptly ended his scenes in the Shining to build suspense) until now because even though these two establishments are in different regions (Emilia Romagna and Le Marche), they are joined by a common intangible. Great seafood in Italy, much like the wine we have written about earlier in our trip, depends not so much on the chef and on human intervention, but on how nature endowed it. The best wines we have drunk on this trip were ones that were destined to be great because the grapes were optimi - as nature intended them to be and where nature intended them to be. The same is true of seafood. If you catch it, they will come. Serve the absolute best ingredients that are uncompromisingly fresh and local and you do not need to intervene to improve it. 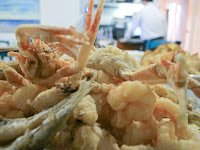 Not to say that these restaurants simply threw a flapping fish on our plate and we devoured it. At l'Ancora we started with a smoked salmon agrumi and a swordfish mojito, hardly models of culinary non-intervention. The mojito in particular was brash, but it was also basic, a thinly sliced carpaccio of swordfish, lightly seasoned with ingredients used in a mojito (less the alcohol), the light lime flavoring and the dusting of brown sugar did not add so much as they ampified the fish itself. Same with the salmon, its hint of smoke rounded out by the light marinade of orange and lime (?) that just moistened it. At Gran Fritto, a seafood risotto was more a perfect bowl of risotto that simply gave the impression of the sea, while their spaghetti vongole (do not call it that, warns the menu) was among the best I have ever had. 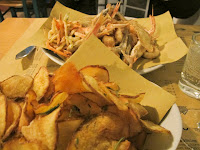 But it was the main courses - a large plate of assorted fried seafood (as the name would imply) at Osteria del Gran Fritto and a plate of wood grilled mazzencolle (shrimp) and scampi (crawfish) cooked in a salt shell at l'Ancora - were the stars of the show. It is simply amazing how amazing simple can be. 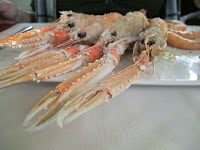 And so we continue to eat our way across every corner, nook and cranny of this incredible food emporium know as Italia. Fortunately, as Chris Elliot tells us, they'll make more. Secure and confident that he is correct, we plow on and chow down. Perhaps that's why they always greet us here by saying, "ciao!"

Ci vediamo!
Bill and Suzy
Posted by Bill Menard at 11:44 AM