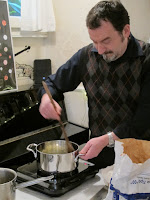 Why Cannara? The answer to that question could be summed up in one word. Ernesto.


Of all the places that we could have landed in Italy, where we could have established our very American beachhead, it is not likely that the tiny village of Cannara would have been at the top of the list. But here we are, our farmhouse and farmland located just across from a busy cemetary (busy with visitors, not new tenants) just a stone's throw from the "leaving Cannara" sign. Our neighbors are vast plots of uber fertile farmland, swallowing our tiny three hectares (mule not included) but the lack of defined boundaries making it look vast in the process. From our little onion farm you can see the beautiful illuminated stone city of Assisi, arrive in minutes at the popular and cosmopolitan Bevagna, visit one of dozens of Montefalco wineries, overflowing with character and most drinkable wine. Yet despite all of the treasures that await us just minutes from our Cannarese base, we call this sleepy farming hamlet home and happily so.

There are countless reasons Cannara turned out to be the perfect place for us in Italy and Ernesto and his Perbacco restaurant could be the most important one. And today it was the only reason we would want to be in Cannara.

We often are somewhat shy about mentioning in print certain activies, towns to visit, restaurants to try, fearing we are giving away the crown jewels of our years of traveling in Italy. That is definitely the case in recommending Perbacco in Cannara, but we simply cannot resist ourselves. We have had too many perfect experiences there to keep it to ourselves. We'll shout it from the mountaintops - go to Cannara! Go to Perbacco!

We have eaten at Ernesto's quirky little restaurant on at least a dozen occasions and through the friendship we have developed with Ernesto, have been able to arrange private cooking classes during his day off for us and the guests at our villa, which we have enjoyed perhaps half a dozen times. And there hasn't been a single time when the experience was less than perfect, less noteworthy than memorable. Although it took a number of visits to crack Ernesto's private exterior, today we are greeted with warmth and true friendship, and are invariably treated to thoughtful, purposeful dishes, prepared with great attention to detail and jaw dropping flavors. Every meal there is a journey, giving true meaning to the expression about life being a journey. A journey with great food.

But the cooking with Ernesto is special. And yesterday was no exception. 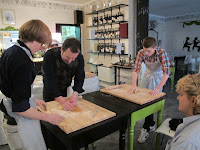 As usual we arrived a little on the late side of 9:00, Suzy, our twin teenaged sons and me to begin an hours long conversation, demonstration, exhibition, participation and mass ingestion that would last until 4:00 in the afternoon. That's right, seven hours in the kitchen and around the table, more time in one day than most Americans may spend in a month. And as we staggered home from Ernesto's, our bellies distended, each of us to a man (or woman) was replaying the high moments, recalling the tastes, and thinking about our next visit. 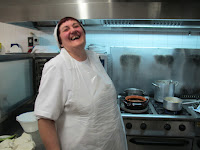 Over those seven hours Ernesto the chef and his cook Annarita (it's often difficult to figure out who works for whom here) guide us through countless antipasti, hand roll pasta with us as we prepare multiple primi and explain with precision and passion the preparation of three secondi. It is a tidal wave of food that one is powerless to resist. And along the way professore Ernesto is quietly providing the historical and cultural background of each dish, of each ingredient, so that you not only enjoy each bite, you understand them as well.

This being perhaps our sixth cooking class with Ernesto, he prepared a menu not of Umbrian dishes, the cuisine he grew up with and which is his specialty, but a number of dishes from nearby Emilia-Romagna, where his wife and her family are from. Different nexus but same result. Pleasure for the palate and the mind. 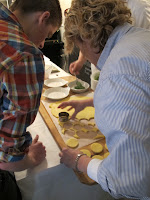 At the risk of missing a few plates and of sounding like a complete philistine, we learned about and prepared, take a deep breath because this sentence is going to run on even longer than most of mine, gnocco fritto, a fried bread that is served warm with prosciutto or salami, erbazzone a warm salt tart filled with cooked greens, a salad of raw artichokes and parmigiano, dressed with lemon and oil, a breadcrumb based pasta called passatelli served in brodo, gnocchi alla romana, large gnocchi punched out of a ribbon of semola based pasta, served over a broccoli sauce and baked in the oven after being topped with breadcrumbs and cheese, handmade fettucine served with artichoke sauce, grilled pork liver wrapped in the abdominal netting, tonno di coniglio or rabbit tuna style, a whole rabbit boiled with savory herbs and then picked clean, the meat bathed in oil and flavored with spices and sage and left to repose for a day or two, coratella alla romana, the roman take on a mass of lamb's offal (lungs, heart and other unmentionables), stewed as in the Umbrian version, but served with sliced artichokes, snails simmered in a rich mixture of fennel, rosemary, sage, onion, parsley, garlic and chili pepper and a traditional dessert, a football shaped cookie called maritozza which typically was presented by a bride-to-be to her fiancee as a kind of dowry. No wonder they get married so young here.
Throughout the day we watched Ernesto and Annarita at the demonstration table that was set up in the front of the restaurant, went back to the kitchen with them to test the progress of the various dishes, chopped and mixed ingredients, rolled out and cut pasta and felt ownership of what was to come to the table later. We watched in amazement as Annarita would effortlessly mix pasta and bread dough, kneading it with one hand in smooth motions we found impossible to imitate. We listened in rapt attention as Ernesto explained the genesis and provenance of a particular dish and showed us the ingredients, speaking about their origin and teaching us about how to identify and where to find the best ones. 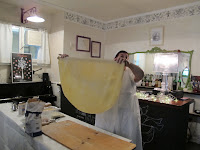 And eventually we sat. We sat alone in the restaurant that was closed for the day to host our class, enjoying the intimacy of enjoying our creations by ourselves with Ernesto occasionally popping from the kitchen with another course, reminding us of what it was and how we had prepared it and topping up our glasses with wine. For hours and plate after plate we oohed and grunted, protesting that it was all just too much, yet finding a way to finish nearly every bite (the pork liver being the notable exception). And the journey was not a simple straight line from famished to bursting. Along the way our eyes were opened to simple discoveries and to new tastes. Discoveries such as the realization that a simple fried bread, hot, slightly oily and savory, combines magically with a soft, slightly salty cool slice of prosciutto, the juxtaposition of flavors and the extremes of temperature binding the parts together into an indescribable whole. New tastes, such as the richness of a simple pasta made from bread crumbs and parmigiano enriched when bathed in a savory beef broth. The freshness of raw artichokes, the spring in them unlocked, allowed to seep out thanks to the lightness of the oil and lemon dressing. The tender moistness of rabbit, simply boiled, but the flavor of which amplified by its days long repose.

Ernesto is a man who should have his own cooking show on TV but not simply so one could learn recipes. Anyone can learn recipes from a cookbook. His show would be not on the food network, but perhaps on the history channel. Or perhaps National Geographic. Maybe the Discovery Channel. But until he gets his own show we will continue to return as members of his studio audience, enjoying the show and the journey.

Ci vediamo!
Bill and Suzy
Posted by Bill Menard at 4:47 AM

I LOVE Perbacco!!! I was lucky enough to visit this magical restaurant while staying at your villa last November with the Dream of Italy group. One of the highlights of our week long stay was the cooking class at Perbacco with Ernesto and Annarita. We too were there all day but had no idea how much time passed because of all the fun we were all having. Thank you so much for sharing your home and Perbacco!