Over four weeks into our trip here, and entering the home stretch. We head to Rome in three days and then back to the U.S. the following day. What a journey it's been.

As the final days whiz by, here are some random musings and images from the past couple of days . . . 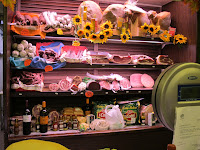 A visit to Umbria is not complete without a trip to Norcia, an ancient town nestled in the Sybilline mountains about an hour from our home. Although it is known as the birthplace of Saint Benedict (founder of the order of Benedictine monks and the patron saint of Europe) and his twin sister Santa Scholastica, it is butchery, in particular pork butchery that the town is synonomous with. Butchers, specifically pork butchers are known throughout Italy as norcini and butcher shops are known as nocinerie. The first surgeons in Europe were trained in Norcia, as they had the knowhow (and the knives) to practice this art.

Each October, during our Food and Wine tour, we bring our guests to visit Claudio, the proprietor of il Richiamo della Sibilla, a butcher shop just off Norcia's main square, for a demonstration of the dismantling of an entire half pig into its constituent, saleable parts (ribs, shoulder, legs). We have even had him prepare for us an entire piglet for porchetta, a whole pig seasoned and roasted in an oven for hours. Claudio's demonstations are always a highlight of our week long gastronomic tour. 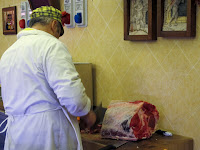 A Day in the life of a Bistecca

Claudio doesn't let his knives go to waste or sit idle. If it's beef you want, he can prepare a few kilos for you, using his cleaver. We bought four enormous bistecca of veal. Follow its progress from hide to plate. 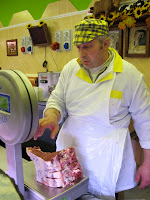 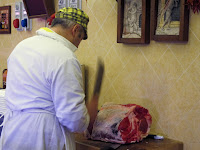 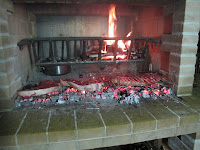 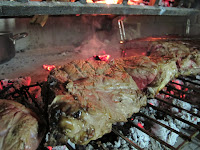 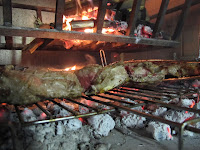 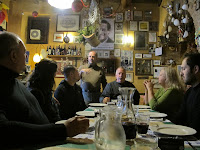 Spoleto is an ancient Roman town about a half hour from the villa and along the road to Norcia. A brief stop there to do some sightseeing turned into a long lunch at one of Spoleto's most beloved osterie, the Osteria del Matto (the Osteria of the Crazy Man), run by Filippo Proietti (the crazy man), with the cooking being done by his charming mamma in the restaurant's tiny kitchen. Filippo is indeed a bit crazy, but his tableside banter is enjoyable, as is the food. A fixed menu was provided over the two and half hours that was going to be our stopover along the way to Norcia. 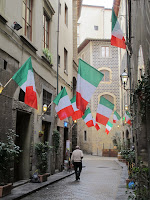 Earlier this week Italy celebrated the 150th anniversary of its unification, or risorgimento, where the numerous city states came together to establish the Italy we know today. This is a sort of made up holiday, like Flag Day or Arbor Day, as it has not really been celebrated in the past. But I guess the Italians are looking for another day off. 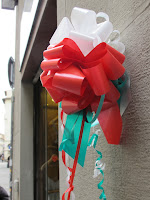 This being a round number holiday, the country seemed to really get into it. It was nice to see so many tricolor flags in the street, hanging out of peoples' homes and in shop windows. It really is a beautiful flag. Way to go, Italy! 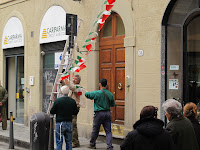 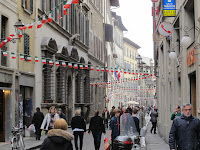 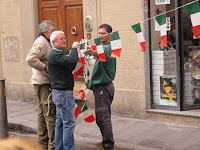 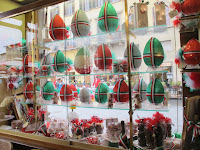 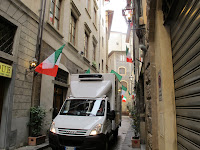 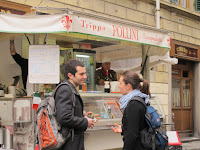 Love it or hate it, tripe, the stomach lining of a cow, is popular in Italy, and especially so in Florence. There are permanent tripe stands in various locations around Florence, and they usually have a line in front of them.
Nothing brings folks together like cow stomach. 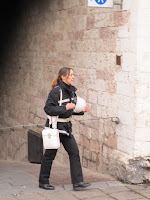 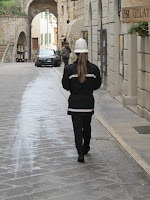 I just love a woman in uniform, don't you? 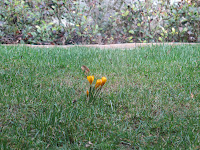 Nature seems to be running its course. The short days are lengthening and the frigid nights and morning are giving way to foggy sunrises and warmer days.

How absurd to think we have the power save the planet. It seems to do just fine on its own.


Ci vediamo!
Bill and Suzy
Posted by Bill Menard at 6:52 AM