Just a quick post this morning, as today is a travel day. We leave Friuli and our new love, the Collio, to head southwest toward Venice for two nights in Treviso. Along the way we hope to stop in medieval Cividale del Friuli. More on that later.


As yesterday was our last full day in Friuli, we naturally were somewhat frantic, hoping to accomplish everything in one day that we had not accomplished in the prior four. It's human nature, I suppose. 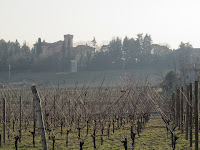 Our first order of business was to visit the dozen or so wineries we had wanted to visit. This would be a tall order under any circumstances, but especially if one is driving. Cantinas put out their "spit bucket" for a reason, as the degustatzione is intended to be a tasting, in order to get an impression of the taste and bouquet of the wine, not a frat party. Not wanting to get arrested, have our new car confiscated and possibly cause property and bodily damage, we decided to limit our cantina visits to two wineries  nearby our hotel, the Castello di Spessa. 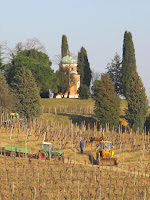 I fully understand that walking into a strange winery can be an intimidating enterprise, especially for those who don't speak a word of Italian. And coming to the Collio in the deepest part of the offseason (we have been told by several locals that "you are the first tourists of the season") means that wineries' tasting rooms, which in this important wine region are generally set up for outside visitors, are not in full swing. Indeed, on our visit to the Sciopetto winery, which is so close that you can see it from the Castello, we walked into three or four private areas, earning cold stares from the fieldworkers, before braving ringing the bell to the private residence. One's fearlessness, or perhaps fear coping, is mostly rewarded, however, and if you don't give up or give into your shyness you will likely have the types of experiences - memorable and enjoyable, usually leading to a little commerce - as we did at Sciopetto and Villa Russiz yesterday.

After a simple lunch at the local Cormons vintners' consortium enoteca (definitely a place more comfortable with its members and locals than oddly dressed Americans who can't speak the wine language), we were on the road toward Gorizia, a border crossing into Slovenia our objective so we could visit la Perla Hotel and Casino, a glitzy property (by Slovenian standards) that claims to be the largest casino in Europe. Along the way we intended to try to visit the Jasko Gravner winery, one of the most famous producers in Friuli, at least according to wine press.

But Gravner's reputation apparently did not proceed him, or at least make him accessible. His address reads the town of Oslavia, near (and possibly over) the Slovenian border. Our generally reliable GPS could not even find such a town and address searches in nearby towns, including San Floriano del Friuli and Gorizia also came up empty. So we meandered along country roads that hugged the international border, looking for signs of the famous Gravner.

How does one know when one has crossed the border into another country? In our case every time we got close, all four of our cellphones would start dinging, beeping and vibrating to notify us that new carrier roaming rates were now in effect as Italian telecom had given way to Slovenian. As the car oscillate toward and away from the border, this got to be quite annoying.

Along the way we saw tantalizing signs that Gravner might be near. You see, he is famous for his back to nature approach to winemaking, where he eschews modern technology, such as temperature controlled stainless vats, for ancient techniques. The most famous of these is his use of terra cotta amphoras, enormous clay urns, which he buries underground with only the neck above ground, as the vessel in which he ferments and ages his wines. The amphora, then, is the sort of symbol of Gravner and his winery.

As we drove along the road from Oslavia (it does exist in real life even if it does not exist in our GPS) we came across several fields and several buildings with amphorae artistically posed. No doubt Gravner was nearby, he had left his droppings, but unfortately the trail went cold.

We never did find the Gravner winery, but in looking for it - a winery that stretches along an international border - it raised an interesting question. Are the D.O.C. and I.G.T. designations, which rely in part on clearly mapped zones, relevant when a wine is produced from grapes that are made on both sides of an arbitrary political border such as the one between Italy and Slovenia, a border which has changed over time, and which now says that a vineyard 100 kilometers to the northeast, which was a generation ago in Italy is now in Slovenia and therefore cannot be designated a Friulano? The grapes certainly don't know or respect this designation and are the same, regardless of which side of the border they grow on.

So we gave up on finding Gravner, content that we would be adding another stamp to our passport and many euros to our pockets at the Perla Casino. Unfortunately, our usually reliable GPS had no listing for the Perla (despite being Europe's Largest Casino!), but it did guide us directly to the border metropolis that is Novo Gorica (New Gorizia). It was not much of a challenge to find the Perla. It really is a big property for Novo Gorica. 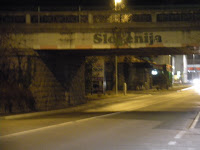 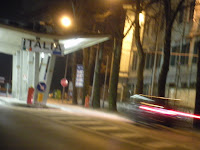 A word about the border. There isn't much security there. I guess the Slovenians are not too worried about an Italian invasion (although with the problems PM Burlusconi is having, a foreign adventure might just the thing to divert public attention. Foreign affairs supplanting domestic ones). We did seem to draw a little concern of the Italian border guards who seemed to be in their office watching soccer, as we kept driving back and forth across the border in order to get a few pictures. In the end they probably decided that we were harmless. 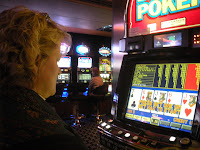 La Perla may be the biggest casino in Europe. I have only a few other reference points to compare it to. But it is certainly not the most exciting. We likened it to Las Vegas, but with better English and more slot machines. Indeed, slots seemed to be the preferred game, taking up at least 80% of the entire floor. We figured out how to pay for our games and redeem our vouchers and for the next hour and a half or so proceeded to lose our money, pretty much in a consistent fashion (if you graphed money lost over time, it would be pretty much a flat line). As we cashed out our remaining winnings, we noted how unfortunate we had not come later in the week, when the resort's entertainment lineup would include something like BaBaBa Brazil (lots of feathers) and the Heaven Boys (a sort of Slovenian Thunder from Down Under). In life, timing can be everything. 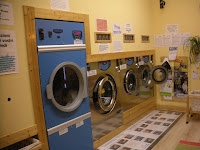 So we left Slovenia, our wallet a little lighter, bound for dinner at the Tavernetta restaurant at our Castello hotel. Along the way, however, we had a date with the laundromat.

When you plan a trip of five weeks it is nearly impossible to pack clean clothes for the entire trip. I say nearly impossible, because somehow Suzy managed to do it. I, on the other hand, was beginning to run perilously close to a second round of clothes recycling. [A brief personal, perhaps too personal, aside: In order to conserve clothing, I had taken to wearing dress shirts twice - the first time with a clean tshirt underneath, the second time au naturele. I adhered to this practice for the first week or so, until walking into the Enoteca at Cormons I remarked that it seemed very nice, but it unfortunately smelled a little of B.O. It was only after I realized the the enoteca was not at fault and that the blame lay with me that I decided to jettison that wardrobe approach. Hence the need to visit the laundromat.]

I had been certain that I had spied a coin operated laundromat in Cormons several days earlier and so earlier in the day we had done some reconaissance there and found it, discovering that it was open 24 hours a day and was completely automated (the machines dispensed their own detergent - just throw in your clothes, set it and forget it). So we arrived there about an hour before our dinner reservation, were able to run two separate loads, run down the street to the enoteca of Cormons (which we had visited a couple of days earlier and had made friends with the staff) and still make our dinner reservation with plenty of time to spare and with clean socks. Clean socks do really make a difference. I'm going to enjoy the next week.

So our final dinner in Friuli brought us back to where we started our Friuli adventure - at our hotel the Castello di Spessa. Without going into great detail, I will say we had a lovely filetto di manzo - a large t-bone steak, cooked rare and served with a half dozen special salts. And what did we drink with our steak? 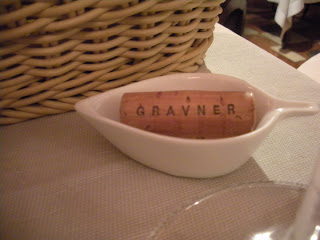 Ci vediamo!
Bill and Suzy
Posted by Bill Menard at 4:52 AM