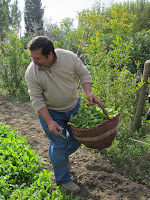 And so a little while later we were tromping through the soft dirt that was home to yard after yard of fresh lettuces, root vegetables, olive and fruit trees and other assorted produce that shape and inform Salvatore’s cooking.  In recent years it seems that Salvatore Denaro has transformed from being a chef with a garden to a gardener with a kitchen.  Either way you slice it spending a day with Salvatore is a delicious experience.
For an hour Salvatore delighted himself and, by extension, us, by showing us his prized possessions – vast plots of arucola, zucchini in all shapes and sizes, spicy pepperoncini and a rainbow of its milder cousin the bell pepper.  Along the way we learned about his olive trees, many producing the local moriaolo olives that are turned into the area’s best olive oil but many, too, producing olives for brining and eating.  He spoke of how the shade produced by these trees helps the vegetables below thrive.  We saw and sniffed and tasted rosemary and brushed our teeth with sage, rubbing the leaves across our teeth, leaving us with sagey fresh breath.  We grabbed and plucked and squeezed persimmons, pumpkin and peppers.
And we picked and filled baskets.  And baskets.  And baskets. 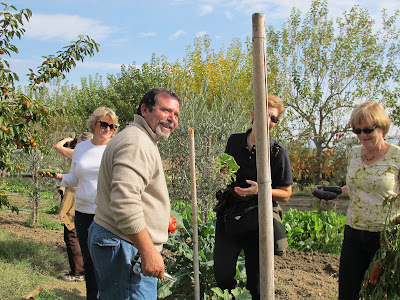 *                      *                      *
But when the gardening was done, we still were not ready to cook.  Salvatore had yet to share with us the butcher’s shop.
So off we drove to nearby Bevagna, a city awarded the status of “Uno dei piu belli borghi d’Italia,” one of the most beautiful villages of Italy, and deservedly so.  There we followed the green Land Rover through a maze of tiny winding passages that we did not even know existed until we came to a stop at the end of a walkway that leads to a street just off the town’s main piazza.  From there we were a few doors down from the butcher’s shop, a tiny hole in the wall that we had passed at least a dozen times before without noticing it.  Stepping through its tiny door into another, expansive dimension of reality, we realized that we would pass by it no longer.  We have found our butcher.  There, above the small counter and display case hung at least 50 whole prosciutto, cured pig legs aging and filling the tiny room with a deep, musky odor that immediately triggers the body’s production of appetite stimulants.  The sight, smell and spirit of the prosciutto, hanging alongside salamis and punctuated by a porchetta and various sausages in the display case had done its trick.  We were ready to go to the vineyard and begin our cooking odyssey with Salvatore.
But first he had to buy a couple dozen tied sausages and we had to sample some coppa and porchetta.  It’s a tough job, but someone has to do it.
*                      *                      *
A few moments later we arrived at the Caprai vineyard, possibly Umbria’s most elegant winery.  Arnoldo Caprai and his son Marco have done as much as anyone to put the Montefalco D.O.C. zone on the map, and they have invested heavily in producing great wine and showcasing it to the world.  The experience of entering the Caprai tasting room is like walking into a Napa winery.  It’s all polish and shine.  But there’s plenty of there there.  And the Caprai’s investment in bringing Salvatore and his cooking to their winery attests to the authenticity of their commitment. 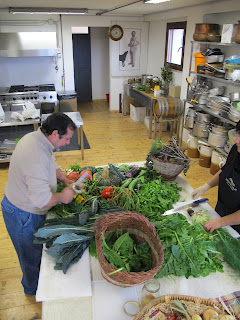 Somehow along the way to the vineyard we lost Salvatore, a thing not completely unexpected.  A few minutes after arriving, however, he appeared, with a flourish and with outstretched arms, as though we were friends he had not seen in ages, and the game was on.  Salvatore welcomed us to the Caprai vineyard with a glass of their excellent grechetto and moments later we filed upstairs to the expansive, well equipped kitchen.  Salvatore disappeared once again and re-emerged a short while later dressed in his kitchen whites and carrying the baskets of fresh produce we had picked at the orto.  With an ultimate sense of style he arranged it across the kitchen tables, establishing an atmosphere that would permeate the day’s activities.
*                      *                      *
And then it was off to the races.  Because cooking with Salvatore is not a calm, restrained affair.  It is frenetic, fast paced rollercoaster ride, with Salvatore both the rollercoaster operator and the guy in the first car, squealing with pleasure, both hands raised high above his head, enjoying the ride as much or more than you do.
The class was, as is often the case, less of a cooking class than a cooking experience.  Oh, but what an experience.  We used much of what we had picked from Salvatore’s garden - cavolo nero (Tuscan cabbage), served as a bruschetta on toasted bread rubbed with garlic and drizzled with olive oil, ratatouille made from fresh peppers, eggplant, zucchini and tomatoes (the latter from his auxiliary back up garden just outside the kitchen’s back door) and a divine fettuccine with arucola pesto sauce.  The latter substituted our freshly picked arucola for the traditional basil and used just a few goccia (drops) of olive oil.  We learned, as we told Salvatore, that the word goccia in Italian also means bottle. 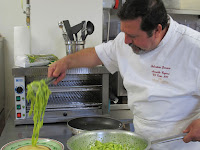 And we made and smelled and learned about and ate those fresh sausages we had picked up at the butcher’s shop, boiled in plain water for a time to reduce the fat and then set to simmer over a low fire in a pot with sangiovese grapes that Salvatore had picked from Bevagna’s city walls growing wild.  The slow cooking effected a complete absorption of the softly sweet grape flavor into the sausage, transforming it from a fatty, musky dish into a roundedly balanced symphony of flavors.
It is discoveries such as these, seemingly inconsequential dishes that one works on with Salvatore while enjoying the rollercoaster’s dips and sharp turns that make his cooking class a cooking experience, and one well worth experiencing.
*                      *                      * 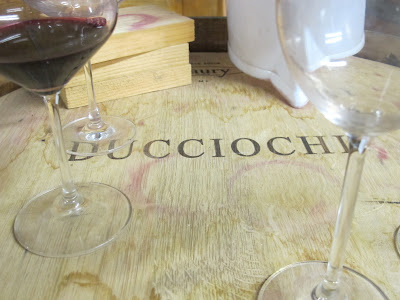 As the Caprai vineyard disappeared into our rear view mirror, after about an hour of goodbyes with Salvatore, we passed from the sublime to the sublimer.  Some might find a visit to the Fontecolle winery in nearby Pietrauto ridiculous rather than sublime.  The next two hours spent with the winery’s owner and sole employee, Duccio Pompili, were the definition of sublime.  And an unparalled treat.
Fontecolle is impossible to find.  That makes our second visit there even more impressive.  But impossible is often worth doing, as it was yesterday.  When we finally and improbably found the right dirt road to drive down we were immediately rewarded with one of the most spectacular vistas in Umbria.  And as we parked just beyond the open air brick block structure, resembling a garage more than a winery, we were greeted by Duccio. 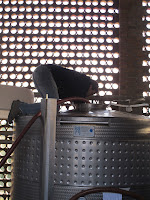 Duccio was in the middle of fermenting his Sagrantino in his “garage winery,” having harvested the grapes just a week earlier.  We walked into the garage/cantina to find a large stainless steel tank spewing purply-pink juice into a large plastic bucket from a valve at the bottom and a hose and pump pumping the juice back to the top of the cylinder.  This is how Duccio circulates the wine in the tank, ensuring that it is constantly in contact with the grape skins which are in the tank.  He checks the fermentation by climbing a ladder to the top of the twenty foot tank and placing his head in the tank’s opening, breathing in the gasses that are offed by the fermentation process and satisfying himself that the level of carbonica is correct.  This is a one man show and Duccio, a self taught wine maker, performs each task with a palpable sense of perfection.  As he speaks to us over the next hour he speaks constantly of wanting to make this process perfect or this one with zero percent tolerance.  His vision is one of making perfect wine and to him perfection is to make wine a product of nature, with as little human intervention and bastardization as possible.
After touring his modest barrel room (he could probably fit all of his barrels and equipment, including his new bottling machine of which he is very proud) inside a single stainless steel tank of Caprai’s) we are invited into his tasting room to sit by the fire and try his two wines – Sololoro, a flawless Montefalco Rosso and a personal favorite of mine and Ducciochi (which translates into Duccio who?), a soft and rounded Sagrantino that is Suzy’s personal favorite.
His tasting room is the living room of his house.
*                      *                      * 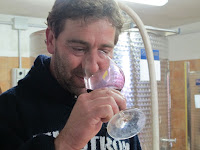 Fontecolle is a winery we have wanted to revisit for some time.  And on a day when we spent the major portion surrounded by the elegance and sophistication of the Caprai vineyard, it was an absolute pleasure to experience the passion and to drink the success of a “garage wine” maker.  After enjoying a glass of Sololoro and Ducciochi in front of the fire and enjoying even more the company of their creator, it becomes clear that this garage houses a Ferrari.
Ci vediamo!
Bill and Suzy
Posted by Bill Menard at 4:59 AM