Onward to the Veneto

It is time to leave Trento to head an hour and a half east from the region of Trentino to the Veneto. Unfortunately, after three days in Italy we realize that maybe we should have bought a larger car.


A wooden case of wine. A box stuffed with wine and food product samples from our new friends at the Endrizzi winery. Grappa. Grappa. Grappa. Spices, fruits, pastas. The trunk of our new car, originally jammed with suitcases is now full of our purchases from our first days here. How do you say rooftop carrier in Italian?
So we measure and stack and pack and repack and cram everything in the boot, save two smaller rolling suitcases that will come inside with us when we arrive at our hotel at our destination for the night - Bassano del Grappa. Hopefully the thieves are not reading our blog and know of the cache that awaits them in the trunk of the car.

The drive out of Trento toward Bassano is staggeringly beautiful. The road runs along a narrow verdant valley that is flanked on either side by not just mountains, but the most enormous and steep mountains imaginable. It is though some all powerful celestial child, seeking entertainment up above decided to create a mystic playground by slamming enormous sheer boulders onto the plain. It is difficult to keep my eyes on the road, which is a challenging windy one at that, instead of up and down these enormous grey rocky outcroppings, dotted here and there with villages and topped with snow. I am at once saddened that I cannot save these images on film (my camera is hidden somewhere in the confines of the trunk, God save us) but realizing too that film (or flash memory) could not possibly do justice to this awesome awesomeness.

As we get closer to Bassano the plain begins to widen and the mountains become less steep and less frequent. Along the way adventure sport enthusiasts begin to make themselves known - kayaking and canoeing is popular along the river, even in 50 degree weather. Cyclist pass along in packs, in bright spandex outfits that only the most fit can wear. Hang gliders pass overhead as does an odd shaped glider. This is an area that seems it would appeal to the sporting traveler every bit as much as Colorado, Utah or the Carolinas. And as countryside begins to give way to the urban, we arrive in Bassano and proceed to pass directly through it, not passing go and not collecting €200.

Our first desination is not Bassano del Grappa, but the nearby Maristoca, a small town ringed by the most amazing fortress walls and with an unusual main square. The town, you see, is the home of a biannual human chess game, which commemorates some sort of historic chess match played in medieval times by men wearing tights, all for the hand of a princess (not wearing tights, but presumably a chastity belt).
This Maristoca is a town I had briefly visited nearly two decades earlier with my mother and father, as we meandered along the Veneto valley, following the trail of Palladian villas that are scattered throughout the region. Then we noticed from the car a town with enormous, well preserved defensive walls and decided to give it a looksee. Upon parking and walking into the main square we noticed the piazza was taken up by an enormous checkerboard square. Not checkers, we found out later, but chess or, as the Italians call it, scacchi (as in Greta). 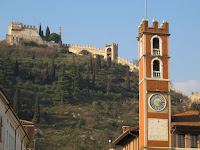 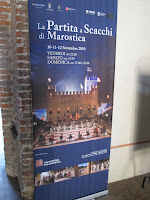 As our current itinerary called for us to stay in Bassano, we decided to follow my our earlier footsteps and dredge up a few memories from the past. How wonderful to again see pictures of the biannual epic, a fully choreographed musical, with a cast of dozens playing the parts of the dueling princes, with chess pieces played by humans, horses and, in the case of the rook, wooden towers on wheels, mounted by a costumed figure. How extraordinary it would be to be in attendance some day. That day will have to wait until September 2012. Be sure to check back to see if we make it.

But beyond the human chess game and the ancient walls, Maristoca has a modern beating heart which needs daily sustenance. And it is at the Osteria Madonnetta, just a few paces from the main piazza that we found our sustenance and our beating hearts were stilled.

Simply put, our lunch at the Osteria was a thing of beauty. This is an establishment that has been in operation since 1904, but its menu and execution are as fresh today as the day it opened its doors. We arrived without reservations, and so we were put in the garden at an outdoor table, a fate that seemed at first to be a banishment. As the warm winter sun bathed us over the next hour and a half, however, we realized that this was indeed not a banishment but an honor. "Il primo sole," the proprietor told us as he checked in with us during the meal - the first sun of the season. And like the first fresh peas of spring or the first fruits of the summer, the first sun of the winter and its welcome but somewhat forgotten warmth have a special intensity, a special effect that warms not just the body but the soul. 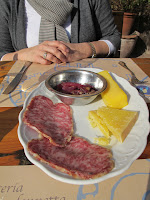 What followed was a succession of simple plates, but each one tied to culinary traditions and to the land. This is a restaurant that celebrates fresh, authentic food, a restaurant that proudly serves and publicizes its ingredients that are part of the Slow Food Presidio, an effort by the global Slow Food organization to support traditional and historic ingredients and recipes. The menu here changes daily but always hightlights dishes using a number of Presidio ingredients - salt from Cervia, Asiago cheese from nearby Asiago, the purple artichoke of San Erasmo, lamb from Alpago, the list goes on. It is a purposeful restaurant, but one that whose purpose goes beyond mere philosphy, as laudable as that is, to the practical art of eating and living well. Bravo Osteria Madonnetta. 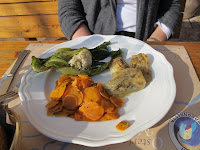 Without boring you with the details of our meal, we had a mixed antipasti plate that included the aforementioned Asiago, a slice of cold polenta that was creamy and delicious, onions agrodolce (sweet and sour) and a local salame called sopressa that was rich and fatty. For our primi we had bigoli all'anitra, the local thick spaghetti-type noodle with a duck ragu that was sparingly served, but which infused the dish with a rich and persistent flavor and an orzo soup (the orzo being another ingredient from the Slow Food Presidio) in a light broth with a medely of chopped vegetables. For our main courses I had a delightful brasato, a braised thin sliced beef filet covered in a rich sauce of Refosco wine and vegetables; Suzy had a plate (actually three different plates) of vegetables - carote trifolate (sliced sauteed carrots), finocchi gratinate (fennel gratinee) and "brocolo de Bassin" a local baby cauliflower served whole, with its green leafy covering and the white head. It was, as they say, a feast.  All this complimented by a Moscato Giallo wine that was cool and crisp, floral and dry and a great compliment to our food and a great compliment to il primo sole.

After lunch we headed back toward Bassano del Grappa, perhaps the birthplace of grappa (our favorite Italian furniture cleaner) and our destination for the evening. More on that in a later post.

Ci vediamo!
Bill and Suzy
Posted by Bill Menard at 5:06 AM

You really need to publish a book, Bill. I love reading about your travels and experiences with food and drinks. Not only do you do a great job of describing every nuance in detail, you make me laugh out loud. Did I mention I love grappa?