These are the sorts of experiences we come to Italy for.


Earlier this month, before heading to Italy, we had the pleasure of hosting a reception at Bella Italia for our friends Frank Van Riper and Judith Goodman, authors of the book Serenissima: Venice in Winter, a fabulous collection of black and white photos and accompanying narrative produced by this husband and wife team. During the reception we mentioned to Frank and Judith the outlines of the itinerary for our upcoming trip to Italy and when we mentioned that we were planning to visit Trento, Frank, the consummate networker, immediately said "I must put you in touch with our good friend, Jack."

Well, he did. And Jack responded. And we exchanged emails. And we overcame shyness and any hesitation and telephoned. And before we knew it, we were winding our way in a taxi to to Jack and his wife Chiara's home just outside of Trento.

We arrived after dark, a fact that Jack had described as a pity, since we would be unable to appreciate the incredible views of the valley below. Jack met us outside the gates of his villa, bundled in a heavy coat, a muffler and hat to protect against the frigid Trento night. From the first moment of introduction we knew this would be a special evening. This stranger had invited us into his home, eager to share his food and wine (and his extensive knowledge about both) with us. He did not appear to be out to murder or rob us. He was asking nothing in return.

And knowing of our interest in wine, which we had discussed by email prior to our arrival, he arranged to share with us another precious asset - his friends. Jack and Chiara had invited their good friends Paolo and Christine Endrizzi, the owners of the acclaimed Endrizzi winery in nearby San Michele all'Adige. What transpired that night and the next day qualify this five week trip a success only a few days into it. 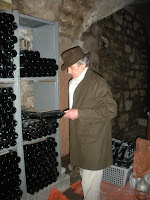 Dinner with Jack and Chiara and Paolo and Christine, as well as Jack and Chiara's teenaged son and daughter was a marvel. Jack, a professor of economics at the university in Trento, is, like most Italians (he is actually a Dutch expat living in Italy, married to a local Trentino woman) -mad about food and wine. He prepared an extensive but not overly fancy meal that showed off his not inconsiderable culinary skills and range, and which showcased too a number of local and fresh ingredients, including an absolute first for us - bear. That's right, sausage made from Winnie the Pooh. 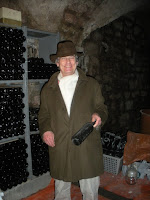 But as good as the food was, and it was outstanding, much of the conversation centered around the wine, much of which had been provided by Paolo and Christina, with a number of offerings from Jack's private cellar as well. Our knowledge of Trentino wines was limited, our exploration having only begun upon our arrival in Trentino earlier that day, and so our education began in earnest around that table.

We spoke of native grapes - muller thurgau, traminer, teroldego, nosiola - and we drank them. We tried a bottle of Endrizzi's Masetto Nero, a rich red wine that is Paolo's own special blend of cabernet, merlot, lagrein and teroldego and which has caught the fancy of novelist Donna Leon, so much so that she it has become a prize acquisition for the fictional main character in her series, Commissario Brunetti.  Christina, who has developed a friendship with Leon, who visits the winery occasionally to stock up on Masetto Nero, can cite title and page where Leon's Brunetti begin his love affair with this wine (Book no. 16, page 184).

And after dinner we were treated to a tour of Jack's wine cellar and cantina, where he makes his own wine (from his brother in law's grapes) and where he stores them. This massive subterrenean room is cool and moist, and the walls are lined with shelf after shelf of wine, vintages of all types stretching back decades to when Jack first started producing wine. He literally can trace the evolution of his wine and his winemaking ability, chart the years' harvests and weather for nearly twenty years through this living archive. What a wonderful passion to pursue and what an unparalleled tangible symbol of that passion. 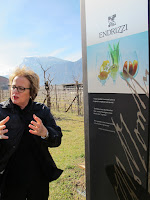 The next day we were off to San Michele to visit our new friends the Endrizzis at their winery. Business intervened, however, pushing us a full hour behind our appointment. When we finally arrived much of the winery's activity had stopped, as it was now the lunch hour. Nonetheless we found Paolo and Christine eager to show off their venture.

As it turns out, we had visited a nearby winery the day before on a cold, misty day. This day, in contrast, was clear and cool, with a crispness in the air and a bright warming sun. As we drove up to the winery, a large building with an enormous cantina and shop on the ground floor and offices and residence above, you could feel spring trying to force its way into the world just a little bit prematurely. 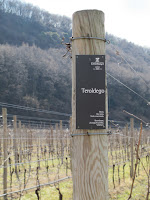 With Paolo busy conducting business on the phone, Christine gave us a tour of the vineyards, the winery and showed us a line of gourmet products that they produce and market. A German woman from Stuttgart, Christine is completely at home in this border region and combines a germanic sensibility with an Italian love of food and an absolute respect for nature. She is every bit an equal partner in this business and speaks about every aspect of it in personal terms. And so it was as we walked through the vineyards, talking about the different soil types of the various areas and how they affect and are matched with the particular grapes grown there. She pointed out the  pergola, a superstructure that allows the grapes to grow up and overhead, a historic artifact seen throughout Trentino that no longer makes commercial sense for them but which the Endrizzis maintain as a way of connecting their winery to the past and to tradition. She spoke of their move toward natural and sustainable planting methods, encouraging, for example, bird nesting among the vines in order to get the natural pest control offered by their winged tenants.

As we wandered among the rows of grapes, we noticed how tidy and orderly they were, how well cared for they appeared. At the same time rows closer to the winery were labeled for the edification of visitors, signs describing the grape as well as its taste and sensory characteristics. Throughout the fields and inside in the winery itself were signs bearing quotations from Goethe, a visitor to this region, connecting the visitor (in Italian, German and English) to the wisdom he conveyed in his Travels In Italy book. The Endrizzis do not just want to sell you their wine. They are committed to having you experience what the wine means. And to them, it is more than just an accompaniment to the meal.

In fact, as we continued our tour Christina made an interesting observation, one which I am not sure even she understood the significance of. She spoke of a nice meal as one centered around the wine, where once the wine was chosen, a menu could be assembled. The wine-centric table is indeed a different way of thinking of a meal. But there is a certain sensibility to it, even for those of us who are not vintners. 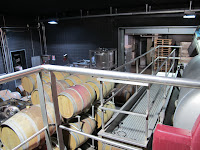 Our tour moved indoors to the subterranean rooms where the wine is made and stored. This is indeed a large enterprise and every detail, from the layout of catwalks above the tanks (so you can see into them, clean them) to the use of nitrogen to expel corrupting oxygen from the tanks to playing music to the wine, a living organism, is well thought out and purposeful. It is indeed a refreshing experience to be in the presence of people who care deeply about something and whose every action is in pursuit and furtherance of that passion. That is what the Endrizzis are about. 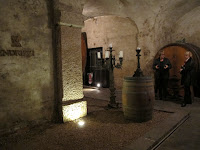 Our tour ended in the cantina and wine shop after passing through a reception room where they host weddings and other special events throughout the year. The cantina is enormous and tastefully appointed, with wines from Trentino as well as the family's other winery, a recently acquired estate in Tuscany's Maremma area, specializing in Morellino di Scansano. There is a section of unique quality foods as well, which is one of Christina's passions and pet projects. We sampled flavored mostardas, gourmet salts, honeys and jams as well as special pastas. And a short while later we were loading up a box of samples as well as wines to try along our travels in Italy, like modern day Goethes with a better picnic basket. It was indeed a pleasure to meet and to spend time with the Endrizzis, another selfless gift from our new friend Jack. 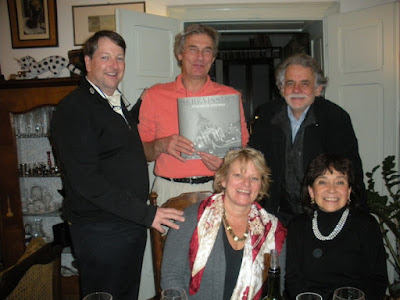 *        *        *
During our walk through Christina's fields she stopped and made a simple yet profound point. "Great wine is made here," she said, pointing to the fields. "You can ruin a wine inside when it is pressed and fermented, but you cannot make it great. It is the grapes that make a wine great." This respect for and trust in nature, a willingness to become a partner with nature, even a junior partner, rather than futilely trying to be its master, is a great insight that can teach us all a great deal about how to live life fully.

Ci vediamo!
Bill and Suzy
Posted by Bill Menard at 5:11 AM

Hi Bill and Suzy: What a marvelous account, and Judy and I are so glad you were able to have such a simpatico visit with our friends in Trento. When we had dinner at Jack and Chiara's the main course was boar, not bear, so that in itself is a reason to return. Clearly, all of you (including the Endrizzis) are on the same gastronomic page. Again, we are thrilled to have helped make this happen. Molto amore, Frank Van Riper and Judy Goodman.