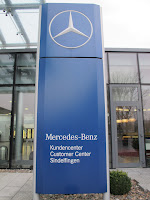 It's our second day in Germany and as we begin to shake off the effects of jetlag (this will likely take two or three days) we begin to make those keen insights that our readers have come to expect. I hope it won't seem too presumptuous of me to be making sweeping generalizations and authoritative statements about a country that we have been exposed to for less than 36 hours, but that is why my readers pay me the big euros.

German is a funny language. Not funny haha, just peculiar. It has a lilt and tempo similar to English and many of the words sound quite similar. It's sort of like English with extra phlegm. But as similar as it might sound, we find ourselves completely unable to understand a single word. I mean a single word. And forget about reading it. The Germans often use more letters in a single word than we use in a paragraph. By the time one gets to pronouncing the final syllable, he has doubtless forgotten the 15 or so that preceeded it. I'm frankly shocked that the Allies were able to break German military codes during the war. Even uncoded the langauage seems just impossible.

But it is fun to listen to and look at. Any language with exit ramps marked ausfahrt and destinations like Dinklescherben is good for a few laughs. And don't even get me started about Fuchsberg.

In the morning we go downstairs to the hotel's buffet breakfast, an elaborate offering that puts the typical Italian hotel breakfast buffet to shame. Plates of cheeses segragated by firmness (hard cheese, soft cheese - how odd a classification system, why not by shades of white?), countless muesli and other cereals, eggs (5 and 8 minute boiled eggs, scrambled), breads and pot after pot of jams, and a whole host of sausages and wursts. What is striking is that for all the breadth of choices, the quantity of each selection is fairly small because the typical European seems to take a small portion of a few things from the typical breakfast bar.  Put a board with five small wedges of cheese on an American breakfast buffet and the typical American would take the board back to his table and inhale the entire selection, washing it down with a pound of bacon for good measure.

And how odd is this? It seems that every single guest who comes to breakfast is named Morgan. Or at least that is how the hostess addresses each of them. Perhaps she is just bad with names.


*        *        *
Speaking of names, as we check out from the hotel on the way to the Mercedes factory I chat up the receptionist who checked us in the day before and who recommended our lunch spot - Ochs'n Willi. I tell her how much we enjoyed the meal and ask her what Ochs'n Willi means. She replies that Ochs'n has something to do with meat or ox and that Willi is simply a name. Beefsteak Charlie's so to speak. Meet Steamboat Willy's German cousin - Oxtail Willi.

Or better yet, Beef O'Brady's, a favorite restaurant name in our family, not simply because of the ludicrous name (although it is ludicrous; who names their child Beef?). No, Beef O'Brady's has made it into the Menard pantheon of overused comedy routines by way of one of the absolutely worst produced and written local radio ads that we had the misfortune of hearing. In the commercial a couple is despairing of their poor dining choice at a competitor's restaurant when they are hit with the brilliant, yet somehow melancholy realization that "we should have went to Beef O'Brady's." Aside from the dubious truth of the statement, our family is unanimous in its belief that they should have gone instead to adult education classes to learn basic English grammar. I wonder how you say "we should have went to Oxtail O'Willi's" in German.


*        *        *
But grammar and linguistics are far from our mind as our taxi turns off the highway, about a half hour from Stuttgart, in the town of Sindelfingen, home of the Mercedes Benz factory. We pay for the taxi with a voucher provided to us by Mercedes (pretty much everything we have done for the first day is included in the Eurepean Delivery progam - taxi vouchers, hotel, lunch at the fctory) and are dropped off at the entrance to the Customer Center. It is an enormous modern glass building where Mercedes owners take delivery of their new cars and others assemble for the popular Mercedes factory tour. Today we are here for both.

We have arrived with untold cubic meters of luggage, but Mercedes seems prepared for this. Just inside the front door is a luggage deposit and there are airport style luggage carts to help shuttle the mountain of baggage. The expansive lobby is well marked with a check in area and within minutes our luggage is gone and we are seated in front of a hyper-efficient German woman who will process our paperwork and plan our day's itinerary.

The actual delivery of the car, along with the filing of registration papers with the local township takes about two to three hours, during which time we take the two hour factory tour and have a very good lunch in the Mercedes restaurant. The tour is, unfortunately in German, which means we understand about two words, but the tourguide frequently turns to us and gives us a private explanation in English. But words are not particularly necessary. The whole scene overwhelms one with a dazzling synthesis of artistry and technology, as massive robots hand unrecognizable metal parts to one another and proceed to turn and rotate them, other robots reaching over and popping welds with a crackle, flash and a puff of smoke, while nearby teams of workers ride a conveyor lined with car chassis, deftly placing sunroofs and headliners in position, snapping them into place and securing them before moving to the next vehicle in this slow moving, incredibly complex symphony of assembly. The sheer quantity of activities taking place under this roof all at once, and the underlying organizing and scheduling that underpins it all, is absolutely staggering to contemplate. 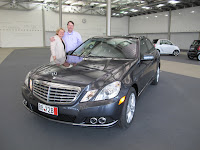 The result of all of this is presented to us in the delivery center shortly after lunch. Our new E350, the nicest car we have ever owned and possibly the nicest we will ever own, has been driven into the cavernous delivery room and we are escorted to it by our personal technician, who spends a half an hour showing us its operation, from how to adjust the seats (push on the controls that are shaped like the seat to move any particula axis) to how to turn on the headlights (you don't; they are always in automatic mode and figure out when to turn themselves on, thank you very much) to how to operate the radio and navigation. Our new car has only a few kilometers on the odometer. It has been given birth in one of the nearby buildings we have seen during the factory tour. Here in the delivery room it is telling us that it is ready to leave the nest. 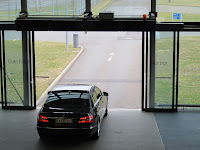 We say our auf wiedersehens and danke schoens and ease out the showroom door, with its "Gute Fahrt" wishes (happy driving or bon voyage), trying not to let the assembled well wishers see our chuckles. We throttle up and a minute later our maiden voyage comes to an abrupt end. We have arrived at the E.H. Harms office, where we have to make final arrangements for the car to be picked up in Rome and delivered to the port in Germany where it will be shipped back to the States. All of this could have likely been arranged in advance, and the hour spent filling out paperwork is somewhat anticlimactic, but it is handled, as every facet of this transaction, with typical German efficiency. Soon enough we are merging onto the autobahn on our way to Munich.

This part of the story goes quickly, partly because the road is good and there is not much traffic, partly because we arrive in what seems to be the blink of an eye. We are advised to take it easy on the transmission for the first one thousand kilometers and we do so, because we are able to hit 160 km/hr (100 mph) without breaking a sweat on the tachometer. It is so smooth and effortless and fast that I nearly expect to see us break into hyperspeed, like in Star Wars, with the stars momentarily standing still before becoming a blur of motion as we rocket through time and space. To be on the safe side, I look to the passenger seat and am happy to see Suzy rather than Chewbaka.

We arrive in Munich and our efficient German GPS matron guides us to our hotel, warning us that we cannot drive to the front door (pedestrian only zone). It is my birthday and we have booked the best room in this boutique hotel, with plans to dine at a local tavern by the name of Andechser am Dom, recommended to us by a friend back home. But more on all of that tomorrow. In the meantime the new car will have plenty of time to recover in a parking garage, as we spend the day wandering around Munich on foot, eating schnitzel and drinking beer.

Ci vediamo!
Bill and Suzy
Posted by Bill Menard at 6:48 AM