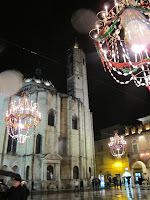 When we began planning our trip to Italy some months ago, we toyed with the idea of spending a little time visiting Le Marche and Abruzzo, two regions sort of between where we were starting and where we were going. They had the added bonus of being regions that we had visited before, briefly, and had want to return to.
Le Marche, in particular, held great fascination for us, in part because of the recommendations of our new friend from Washington, DC (by way of Le Marche) Fabio Trabocchi. Before departing on our trip we had lunch with Fabio and got a list of places to see, things to do, wines to drink and foods (and restaurants) to eat. Fabio kindly supplemented that list as we travelled about.

One place that Fabio raved about, and which others we have spoken to, both in person and online on the Slow Travel website similarly raved about was a town in Le Marche called Ascoli Piceno. To a person, everyone commented on its unparalleled beauty, especially that of its main piazza, the Piazza del Popolo. And so off we headed for a brief, overnight visit.

We arrived outside Ascoli Piceno in the late afternoon, and we could immediately see that what had been told to us was true, not when we arrived in the piazza, but even as we descended from the highway toward the town, its historic buildings visible from the hillside above, beckoning us to hurry. We did so, but with some difficulty, as the historic hotel Palazzo Guiderocchi Hotel had been cleverly hidden in a maze of alleys just wider than our car. Score it 1 for Italian urban planners - 0 for GPS designers. 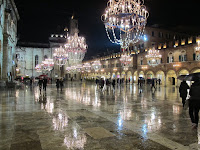 When we finally emerged into the Piazza del Popolo after checking in and dropping off our bags, we realized the hype had been true. The piazza is immense, but it is utterly perfect in every aspect. Its proportions are pleasing, it is clean and modern, yet the buildings remain authentic and exceptional representatives of various architectural styles, with a unifying renaissance theme and layout. The great stone square is itself a great unifying element, drawing the locals and tourists in and holding them captive. It is indeed a most satisfying space.

But our brief stroll around the town showed us that the Piazza del Popolo is not an isolated eruption of beauty and good architecture and planning. The tidy streets of this town are simply lovely, with other inspiring piazzas popping up here and there, as well as a number of beautiful civic and religious buildings. We made plans to wake up early the next day and explore this town in depth before heading south to Abruzzo. 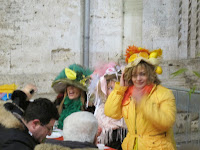 So we took a pause and found a table at a little establishment just a half a block from the Piazza del Popolo. The DOC e DOP is a little gastronomic and oenologic slice of heaven, stuffed into a narrow storefront and with a tiny terrace spilling out into the street. Despite the frigid temperatures but not wanting to miss the maurauding bands of children that were clogging the streets by now to celebrate Carnevale, we pulled up two chairs on the terrace underneath a heat lamp and proceeded to order a couple of glasses of local wine and some small plates. What was going to be a quick stop lasted for over an hour, as the proprietress brought plate after plate, dish after dish of fantastic tastes of Le Marche to accompany our local wine. It was the type of local treat and local experience that you come across often on your visits to Italy, and the enjoyment was amplified when a rogue group of teenagers chased one of their own onto our terrace and proceeded to cover him with silly string and some sort of foam, an assault which brought our comely proprietress out to send them away, but which ended with her being sprayed mercilessly as well. All of this entertainment for free. 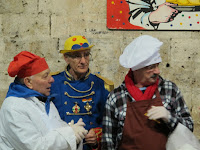 We headed back to our hotel with plans for a late dinner and an early start in the morning.

But fate intervened. I will not go into the details, but our sons' travel plans to meet a school group in Paris got waylaid, the way travel plans often do. We spent the better part of the evening and the morning doing what we could to lend moral support or to make alternate arrangements, a thing made more difficult by different time zones, incompatible cellphone carriers and general difficulty dealing with multiple groups. In the end they all arrived, but at a small cost - our visit to Ascoli Piceno.

While Ascoli Piceno may be best known for the ascolana olive, a meat stuffed edible olive that is lightly fried (and delicious, I might add), for now it will be more like a truffle to us - a lovely aromatic scent that we have gotten into our nostrils but which we have had to leave behind, longing to return.