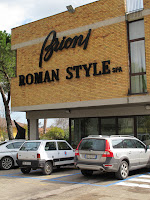 I am not sure if the Abruzzo town of Penne is named after the pasta or if it figures in any way into the origin of the noodle. For me, Penne is important for one reason only. It is home to Brioni Roman Style S.p.A., makers of the world's best men's clothing. At least in my opinion. And James Bond's.

A day earlier we had been searching for "the world's only Brioni outlet store," which the internet had told us was located in Montesilvano, a sprawling commercial suburb located just outside the town of Pescara. Our search had been in vain, as the outlet had closed a couple of years ago. But the trail did not go completely cold. We were told that the outlet had been moved back to Penne, the home of the Brioni factory, where master craftsmen are trained and then cut, sew and practice whatever other magic that goes into Brioni clothing. And so after checking out of the Dimora Novecento, the superb B&B that was our home in Pescara for one brief day, we began the hour long drive to Penne. The game was on.

Penne is located in a remote area of Abruzzo that you really have to want to get to in order to get there. And we did. Want to. For the first half hour of our drive, no matter how far we drove the GPS' estimated time of arrival continued to remain a half hour away, defying the laws of nature. But eventually signs to Penne began to appear and the number of kilometers to Penne on those signs began to get smaller. Finally, we arrived. The excitement in our car was palpable. At least on the driver's side of the car.

The only remaining obstacle was that we did not have an exact street address for Brioni, only a street with no number, so eventually the GPS announced that we had arrived at our destination. This would have made sense if Brioni was a small coffee shop or a purveyor of ladies' underwear. Obviously, there was a mistake here.

So up and down the via Fonticolle (I believe he was one of Brioni's founders) we drove, searching in vain for the outlet store or any sign of Brioni, as a familiar feeling that we had felt in Montesilvano the previous day began to creep in. At last we looked up at a non descript building and halleluja! It read Brioni Roman Style S.p.A. "X" marks the spot, just like on a treasure map.

We then had only two small obstacles to surmount. First, there was no parking on the street. Second, the entire complex was surrounded by a gate with signs conspicuously announcing "Proprieta Privata." This was not the welcome we were expecting at the only Brioni outlet in the world.

After a few passes by the building, with a sense of anxiety building, we decided to call inside and ask where the outlet was located. We pulled over and called, waiting a few moments until the operator was able to find an English speaking employee to speak with me.

And then the words I dreaded to hear came from the other end of the phone. "No, we no longer have a shop, just a room where our employees can get a few things." I had to supress the urge to ask the woman if they had any employees in my size.

But the kind voice did not simply rush me off the phone. "Are you nearby," she asked. I lied and told her I was just outside of Penne, not wanting to let her know that I was spying on the building from just outside the gate. "Then come to the factory and ask for Beatrice. There are things that I want to tell you that I cannot tell you on the telephone."

Jackpot, perhaps. Maybe she was going to show me the super secret employees' shop that wasn't open to the public, just because she liked my voice (it is quite nice). Or perhaps she had heard through the Brioni informant network that an American man had been snooping around Montesilvano the day before asking questions about a Brioni outlet store, questions that must be ended once and for all, regardless of the consequences. Whatever the reason, we had been invited inside the barricades, into the belly of the beast, to the Brioni mothership.

We parked our car inside the fashion compound and immediately proceeded to embarrass ourselves attempting to enter the glass reception area through a locked door, instead of the one marked "Entrance." When we stepped inside we were already known to the receptionist, who had been watching our pathetic attempt to open the door. When we asked for Beatrice there was a great commotion and hubbub. Apparently this Beatrice was an important person.

After a few minutes we were escorted upstairs and told to wait in a small glass waiting room, where an Italian woman was also waiting. A few moments later, down the hall strode a tall, dark and absolutely gorgeous Italian woman who entered the waiting room, completely ignored the other woman (who had been waiting longer than we had) and introduced herself as Beatrice.

During the next 15 minutes that we spent with Beatrice it came up that I was a customer of Brioni and for that reason, despite the fact that there was no shop for us to buy her company's clothing, she was honored to spend time with me and simply talk about her company. I must confess that she was even more beautiful and stylish than her company's clothes, a fact that took most, well actually all of the sting out of our failed mission. Along the way she escorted us down a hallway where we were able to watch Brioni master tailors cutting and assembling suit jackets. She also asked if we would like to meet the chief tailor, the capo di tutti capi. I replied in the affirmative, simply wanting to get a photograph with his excellency. Unfortunately it was lunchtime and he had left the building, Elvis like. But Beatrice gave us her card and asked us to call ahead before our next visit so we could view the entire factory and meet the luminaries. It is a visit that will take place, mark my words. Talk about bucket list.

With that, we said our arriverdercis to Beatrice and left the building (through the unlocked door), pausing to take a single photo of the house that houses this house of fashion. We left Penne and Brioni Roman Style S.p.A. without the hoped for bags of fashion at rock bottom prices, after two solid days of trying. But we left with memories that are even more beautiful still.

Ci vediamo!
Bill and Suzy
Posted by Bill Menard at 3:26 AM

Ah, too bad. Signor Brioni himself must be wondering what it will take to get this American off of the trail. Looks like another trip will have to be taken there in the future.

You should see if there's a Zegna outlet. www.zegna.com. Excellent clothes in the italian tradition.

Good luck. Your journal has been fun to read.