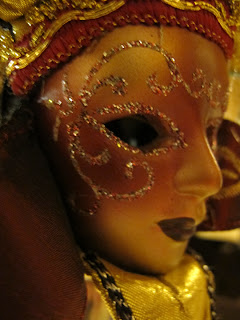 Coming to Carnevale in Venice is definitely a bucket list item. And if it never made it onto your bucket list, it should.


But when you do come to Venice for Carnevale, don't even consider coming out of costume.

We arrived in Venice on Sunday at noon, having driven from Treviso, a route our GPS told us would be an hour, but which is really only a few dozen kilometers. For those of you whose brains may not yet have switched on, Venice is a series of islands in a lagoon. Cars are neither permitted nor, except for this adventurous group of drunk Italian boys, is there any manner of access for them at all. If you drive to Venice, as opposed to flying or taking the train, you need to park your car in one of the garages on the periphery, lock it up and hope your baggage is not stolen (we'll find out on Wednesday) and take a private water taxi or the vaporetto (the public water bus) to your hotel.

The day before leaving leaving Treviso we started to research which garage to use during our stay, and it became apparent that perhaps a little advance planning and booking may have been in order, this being Carnevale, high season for Venetian parking garages. Our preferred garage, which allows you to reserve a space online, was completely full and not accepting reservations, so we arrived at Piazzale Roma without a place to park, hoping to find one. The garage status signs showed "full" for a couple of options, so we got into line at the modern, privately operated Garage San Marco, imagining that our car would be safer in private hands than in public. Besides, we had looked at their website the earlier and it promised to be a modern, high tech affair, a glass tower where the customers were treated to champagne! http://www.garagesanmarco.it/en/our-garage.html

We joined the queue to park at Garage San Marco, blindly getting into line behind a dozen or so cars that appeared to be heading to nowhere. And for just under an hour that's where we went, nowhere. We sat. And sat. Every ten minutes or so the queue would rumble to life and a car would enter the garage and another would disappear around the corner. Meanwhile other cars swooshed past us in the lane to our left, either driving directly into the garage (presumably these were the souls who had reserved spaces in the garage or simply Italians being Italians - cutting in line) or disappearing down the street around the corner, destination unknown. Finally, after about 50 minutes we were at the front of the line and hustled into the garage, told to drive up to the eighth floor.

Garage San Marco, the gleeming, privately owned modern steel and glass parking complex has only eight floors. So, we reasoned, we were being given a spot in the penthouse. Unfortunately, the ramps from floor to floor were designed slightly narrower than the width of our new car, which we have, remarkably, kept dent free so far (it is my strong opinion borne from years of observation and experience driving here that Italians have a relationship with their cars completely different from Americans, seeing them as functional pieces of metal that get you from one place to another and whose bodies may readily be sacrificed to the greater good of its passengers. I  have seen an Italian man gouge a dent the length of his car as he backed into parking space - partly if not mostly on the sidewalk - not oblivious but not seeming to care about the damage he was doing. It was like watching someone scratch his fingernails on a chalk board. Just stop, please!).

So not only is the ramp narrower than our car, but it is one continuous, unbroken spiral into the heavens, during which the left rear panel of our car hovers over the curb, inches away from the cement wall and the right front fender hangs over the right curb, flirting with the outside wall which is marked every few feet or so with black scrape marks from cars whose drivers momentarily lost focus and whose vehicles made the ultimate sacrifice. After twenty or thirty seconds that seemed like an eternity we emerged from the first ramp to - the first floor! Yes, here in Italy the ground floor is the ground floor, not the first floor. Our first dizzying spiral has taken us to the first floor, not the second, meaning we have another eight to go.

Well, as we finally reached the eighth level of Garage San Marco, the penthouse as it were, all of the original German engineered paint on our side and front panels, we could almost see great flocks of doves flying overhead. In fact we could. The eighth floor is the roof level (not the penthouse after all), an uncovered roof level at that. Stay away, filthy doves.

And although we were not greeted with a glass of champagne as the website implied, and the glass and steel part of the structure shown on the website was only a tightly shot phot taken next to the elevator on the ground floor (the reality of this garage being a 1950's era cement bunker), we were not in the least bit disappointed. The eighth floor attendant, with whom we left our keys was most cheerful, talkative and helpful and our new car seemed to be in good hands. We just hope he really works there.

So off to the vaporetto and the brief trip to our hotel, a return to the five star Luna Baglione Hotel where we had stayed last spring. The Luna is a member of a group of hotels that call themselves "The Leading Hotels of the World." No doubt the Luna is a fine hotel, one of the nicest we have stayed at, but I do find this self declaration a little braggadocious. Sort of like golden delicious apples.

It is Sunday, the end of the weekend of the week preceding the final week of Carnevale. In fact we are told by one fellow vaporetto passenger that Carnevale has only officially begun earlier that day with a descent from the campanile, the famous belltower in Piazza San Marco, by an angel (or more precisely, by a man dressed as an angel suspended on a wire). But still being the weekend the crowds are huge and many folks are in costume. There are balls in town tonight and for those not attending a ball, just walking around in costume is a pretty neat thing to be doing.

And that is my strong advice to anyone who comes to Venice for Carnevale. Don't bother if you don't plan on wearing costume. There is nowhere else on the planet where you can strut around wearing knickers and tights, sport a curly wig, wear a waistcoat or a greatcoat and not feel silly. You don't feel silly at all, partly because everyone else is doing it and partly because you have a tiny paper mache covering that stretches from your eyebrows to just above your nose. The obscuring of that tiny portion of your face grants you complete anonymity and the feeling is oddly liberating.

And how silly that this little bit of covering does this. The Carnevale maske is like the black bars that are photoshopped onto embarrasing pictures to hide the identity of the buffoon whose pants fell down or the girl gone wild who really likes beads. In a foreign town, a quarter of the way around the world from home, you would think your anonymity would be pretty much assured, but covering the eyes gives one that final boost of confidence that you will not be recognized and that you can make a complete ass of yourself.

Well, that bubble was burst pretty quickly after arriving at our Carnevale ball, a grand affair at the Grand Hotel Danieli, another of the Leading Hotels of the World. We had booked online two spots at Sunday's most chic ball and arrived in costume (which we had also booked online a couple of weeks prior to our arrival). After making a grand entrance down the staircase into the ballroom (camera flashes blazing at our each step), we checked in and were told our table number. Discovering I had left my wallet back at the other Leading Hotel, I left Suzy in a ballroom with a bunch of men in tights, wearing masks and perhaps thinking that their anonymity would allow them to do anything and walked the short walk back to the Luna, passing through San Marco square, where a public event was taking place in front of an outdoor stage and where professional dancers in costume were dancing with tourists. Along the way a very nice young Japanese girl asked me for my photograph and insisted I pose in a dance position with her, thinking I was one of the professional dancers. Wow! These costumes are pretty great!

The myth of anonymity came crashing down as I returned to the Danieli, however, re-entering the ballroom, this time descending the staircase solo, no cameras flashing. As I caught the eye of the gentleman who had checked us in twenty minutes earlier, I said to him that I had checked in earlier, to which he replied, "yes, I recognized you." Are you kidding? He recognized me? What a letdown. One travels a quarter of the way around the world to a city where he knows no one, rents an intricate costume and mask, goes to an exclusive ball in one of the Leading Hotels of the World and is recognized. Marlena, I'm with you. I just want to be left alone.

Unfortunately, the release form I signed before being seated for dinner does not permit me to describe what occurred during or after the ball. Let it be said only that we ate a little, drank a little, chatted a little with the fascinating assortment of personalities at our table (including a Venetian gentleman who was responsible for organizing the ball). And we learned how to gavotte. Frankly there is no reason to dress up in powdered wigs if you aren't going to gavotte and so for several hours after dinner we stepped and bowed and stepped some more. It is a very civilized style of dancing, one that keeps perspiring to a minimum and which keeps the physical desire pretty much in check (which is a good thing given how complicated it is to don and take off these costumes).

Some time after 1:00am we left the Danieli, having experienced a Venetian Carnevale ball in costume. Although it was not the bacchanalia that I had expected (and had hoped for), it was a memorable evening in every respect, one that I would like to repeat in the future. And as I sunk off to sleep on one of the leading beds of the world, Vivaldi playing in the back of my head, visions of F. Murray Abraham driving Wolfgang insane, I was able to tick Carnevale off my bucket list.
Posted by Bill Menard at 3:37 AM