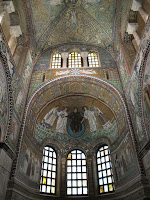 As we left Venice yesterday, a fierce wind had picked up, bringing cold temperatures and gray skies. But as we drove south from the Veneto into Emilia Romagna, the cold turned frigid and the stinging rain turned to snow. After two weeks on the road, our streak of good fortune in dodging the bad weather had run out and we were driving into the belly of the beast.

For those of you who might have been holding your collective breath, waiting to see if our valuables had survived their three day sleep away in the trunk of our car on the roof level of the Garage San Marco, you can exhale. When we arrived at the eighth floor penthouse parking spot, our car was in good spirits, apparently unruffled by ruffian hands. We inserted the special valet-proof trunk key, heard a slight click and pressed the electronic latch, and as the hood lid swooped open heard an angelic chorus, as the ten bottles of grappa, four cases of wine, presents for the kids and suitcases of dirty laundry were bathed in a celestial light. Or perhaps the weather was just breaking.

In fact, it was not breaking. The eighth floor of the Garage San Marco affords one an incredible view of la Serenissima, but it in not the place to be in a gale. At our altitude the wind was a full 100 knots stonger than at ground level and the car was angled perfectly so that when the doors were opened they caught the wind like an Americas Cup yacht, not only snapping the doors violently forward and risking breaking the hinges, but nearly lifting the car into the air (see Bernouli effect).

Having survived this typhoon, we moved on to the dangerous portion of our journey, taking the spiral ramp from the eighth floor to the ground floor exit. As we described several days ago, this cement block ramp is actually narrower than the car itself, but because the car is in a perpetual state of making a left hand turn, it is perpetually hanging over the left curb (in the front) and the right curb (in the rear). The only thing worse than going up this full employment act for autobody employees is going down it, as the hood and the cute Mercedes hood ornament, which oddly looks like a peace symbol) obscure any view of the roadway, which is falling away from you at a perilous slope.

But we made it, with all paint and side panels intact. A few minutes later we were on the causeway that leads from the islands that make up Venice to the mainland, pulling into a gas station to fill 'er up for our two and a half hour journey when I managed to run over a foot and a half diameter cement block, which was supposed to be holding up a lane closure sign but which had been blown over by the hurricane, the concrete disk devouring the paint on the underside of the front bumper that had so narrowly escaped the same fate just moments earlier. Well, it was bound to happen at some point. Especially here in Italy where automotive paint is a completely useless extra, like an appendix.

The drive to Ravenna was pretty uneventful, if by uneventful you mean every five minutes or so the driver breaks into a rant of swearing and moaning about large, round cement disks thoughtlessly placed in the way of refueling cars. About two hours later, Suzy refreshed from her pretend nap and for some reason upset with the driver, our GPS guided us onto a pedestrian only street in Ravenna, where we rolled our suitcases through a two inch mixture of snow and slush to the door of our hotel, the M Club.

The portion of our trip that started with our departure from Venice (and by that I don't mean the portion in a slightly dented new automobile) marks us crossing from northern Italy to central Italy. But it also marks a stylistic shift - one from a pretty tightly organized and planned two weeks to a more loosey-goosey, get up and go every day part of the trip. For the next week, as we travel down the coast of Emilia Romagna through Le Marche and into Abruzzo, we don't have hotel reservations, much of an itinerary (other than a few visits with some friends and suppliers along the way) or much knowledge of what lies ahead. It's like travelling in the old days! 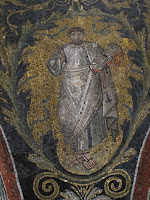 So we were not just pleasantly surprised when we were led upstairs at the M Club by Michael, the owner, we were thinking, this loosey-goosey stuff might just work. The room in this B&B was fabulous, the location excellent and our (too) brief time in Ravenna quite memorable. One risks missing important, possibly life altering discoveries when one travels spontaneously ("no, we didn't get to see the Eiffel Tower. Didn't know it was there"), but the discoveries can be more authentic and more deeply felt.

We did come to Ravenna knowing that it was home to some of the most famous and important mosaics from the fifth and sixth centuries. But this period of history is a complete blind spot for us. I frankly don't know my Aleric from my elbow or my Teodorico from my Ford Taurus. But none of that matters when you actually go inside these tiny (by Italian church standards) basilicas and baptistries and chapels and see the most breathtaking scenes, all made from tiny little stones, that cover entire walls and ceilings in detail that is arresting. Perhaps this was just the norm in the year 400, so a poor pilgrim might walk into a chapel, shoeless and in rags and exclaim, "what's the big fuss? I can't believe I ran my ox cart over that enormous millstone and scratched the underside."

But legend (a recent legend) has it that Cole Porter, gazing upon the ceiling at the Mausoleum of Galla Placidia, a dome adorned with hundreds of mosaic stars, was inspired to write "Night and Day."

I like that story. I may not know much about history, but after spending a few hours taking in the mosaics of Ravenna I do know what a wonderful world this can be.