When we last saw you, we were enjoying a post-mojito plate of spaghetti in sea urchin sauce in the town of Pula. Two days later we are hundreds of kilometers and a cultural seachange away, smack in the middle of Italy in Umbria, its cuore verde (the green heart).  We have arrived at our villa, la Fattoria del Gelso, an eight bedroom farmhouse on the outskirts of the village of Cannara, in the shadow of Assisi.  From the sunsplashed, sandy beaches of the the wild and mountainous island of Sardinia to the rustic, agricultural, but decidedly 21st century birthplace of St. Francis and Lamborghini.  Along the way we have held an important business meeting, spent a day exploring the hilltop city of Orvieto and welcomed a number of guests to our villa, arriving from around the world and eagerly anticipating the start of the Umbria Jazz Fetival.

Our Friday got off to an early start, practically bleeding backward into Thursday.  A 5am wakeup call from the hotel's front desk, followed by a mad dash to shower, finish packing and to steal away from the hotel, quietly, as not to wake the other guests, for the hourlong drive back to the Cagliari airport and our 7:30 am flight to Rome.  All goes smoothly, and we arrive at the airport with more than an hour to spare before our flight.  And although the rental car return center is not yet open, we find a place to deposit our keys and negotiate the check in without incident or surcharge.  We head toward the departure gates when the first threat to our smooth sailing - in the form of a security line about a mile long (1.6 kilometers) - awaits us.  Fortunately, the largely Italian makeup of this line comports itself patiently and with the utmost orderliness, making the processing of this sea of humanity efficient, fast and almost enjoyable.  Whoops, rewind.  These are Italians, meaning those whose flights are leaving soon feel an entitlement to simply shove their way to the front of the line, muttering and glaring at those who had the audicity to plan ahead so they would arrive more than 5 minutes before their flight.  Yet as always, things seem to work out and we make our way through security in plenty of time to board our short flight back to the mainland.

As the coastline of Sardinia fades behind the cloudbanks we reflect on the peace, relaxation and sense of calm that a few days in the sun have brought, but quickly our daydreaming is cut short as the plane begins its descent to Rome.  Only a few moments later we are departing the Avis rental car garage bound for Terni, in Umbria, for a long planned business meeting.  Our rental car for the next 22 days has a balky air conditioning system, however, so a half hour later we are returning to the rental car center, trying not to seem like whiny Americans and are back on the road.  The modest cushion we had built into our schedule is now shot and we drive Italian style for the next hour and a half in order to be on time (a concept still strangely foreign to our Italian partners).

After a successful meeting we start our final day before the next phase of our journey begins.  We have arranged a night in Orvieto to kill the Friday before we can move into our villa, it being rented by another family.  We have visited Orvieto several times before.  It is a lovely Etruscan town built on the top of a tufa hill and visible from throughout the valley below, sporting a beautiful, scaffolding clad cathedral, a number of excellent restaurants, a famous well and an entire underground system of caverns built into the soft rock of the hill on which the town is perched.  All of our prior trips had been day trips, quick ins and outs, with an occasional overnight stay outside the historic hilltop city.  Tonight we have booked a room at the Palazzo Picolomini, inside the city walls and which only takes a few circuits through the town to find. 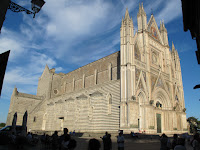 The Palazzo staff is extremely accommodating and shows us to our room, which is adquate and with a good view of the antique rooftops of the city.  We catch up on some business and stroll toward the main piazza, stopping by a couple of restaurants that the staff has recommended to us, peeking in the windows to guage and imagining how they might look with diners, as it is much too early for them to be open.  The streets are quite crowded with a mixture of tourists and locals, all of whom are windowshopping and beginning their evening passagiata.  The town has a wonderful, warm feel which has eluded us on previous visits. 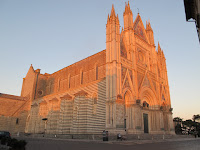 We make our way to the main square, where Orvieto's famous cathedral, dubbed by friends of ours as the "duomo in pyjamas" for its green striped facade practically bowls us over (and not just because it is, finally - and surely just temporarily - devoid of scaffolding).  It is late afternoon and the sun is gleaming directly on its facade, bathing it in a golden light that is practically surreal.  I stop and take a dozen photos, before we park ourselves at a table on the square and marvel at it for the next hour or so.  Over that period, we enjoy world class people watching and a couple of glasses of Orvieto wine, the well known, well exported white wine that has made this city a household name.  Occasionally a young father and his young son and then young daughter buzz through the piazza on their Vespa, the first circuit with child wailing and terrified, the subsequent pass all smiles. 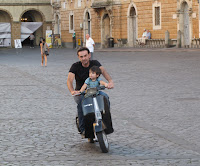 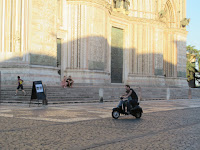 We wander back toward the hotel and duck into a restaurant that hasn't been recommended to us but which looks nice from the outside and whose menu looks like the typical Umbrian fare we have come to consider home cooking.  It is completely empty, always a bad sign for a restaurant in Italy, but we spy a sign saying "giardino interno" - garden inside - and we gamble that there are diners in the courtyard.  Our guess is correct and the small courtyard is full of diners.  We are shown to a table that is open to the sky above and proceed to enjoy some good ol' Umbrian home cooking.  Among the dishes is bozza al salvia, an Orvieto version of barbazza, thinly sliced pork cheek that is like bacon on steroids, that is fried in olive oil with vinegar and sage.  This remarkable appetizer contains the majority of the important food groups on the Italian food pyramid - pork, salt and fat - missing only pasta and grappa to complete the trifecta.

The next morning we unfortunately say good bye to Oriveto, our one day detour having done much to elevate the hilltop town in our estimation, and head for Cannara and our villa, a drive of little over an hour past Lake Corbara and the popular tourist destination of Todi.  We arrive at the villa a little before lunchtime and a little ahead of our first guests, a group of 12 that is joining us for a week of food and music during Perugia's annual Umbria Jazz Festival.  This year's program features, among others, Herbie Hancock, Wayne Shorter and Marcus Miller (whom we plan to see that evening), Branford Marsalis, Ahmad Jamal, Carlos Santana, Gilberto Gil, Sergio Mendez and a late addition, the artist who can't make up his mind what to call himself and now calls himself once again Prince (even though he has no royal bloodline).  We have tickets to a number of these concerts and have been trying our best to herd the bunch of cats who are our guests into some semblance of order, determining who wants to see which concert.  We'll deal with that after they all arrive, which should be by Sunday evening.

Our first order of business after collecting our first two guests is to have lunch, which we typically do in nearby Bevagna at our good friend Simone Prioetti-Pesci's fabulous restaurant Le Delizie del Borgo.  Lunch at Simone's has become a sort of welcome back to Umbria tradition for us, and our guests - one of whom has visited Cannara often and who knows Simone well, the other a first timer - are bowled over at the meal.  As are the couple who arrives during lunch with their infant son and who are repeat visitors to the villa but who have never been to Simone's.  We arrive for our lunch around 2pm and don't leave until nearly 6:00.  This is one of Simone's shorter affairs! 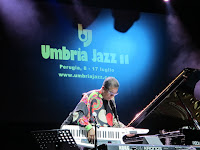 After a little down time, it's off to Perugia for the 9pm concert, "A Tribute to Miles Davis" featuring Herbie Hancock, an Umbria Jazz regular whom we have seen now for three of the past four years, Wayne Shorter and Marcus Miller.  The outdoor arena is packed to overflowing and the crowd is treated to an amazing concert.  The concert features little of the crowd pleasing showmanship of past years' Herbie Hancock concerts, but the sheer musicality, as well as our seats in the very first row make this a special night and a special return to Umbria, our home for the next week. 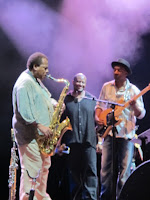 It seems that there is always a something that draws us back to Umbria.  This time it's Umbria Jazz.  But the reason is always less important than the being here.  We are back in Umbria, back in Cannara, and it feels like we are back home.