Umbria has a way of reminding us that despite our efforts to tame her and understand her, there is always another new adventure just around the corner.  Our final day in Umbria proved to be just one of those occasions.

Our adventure for the day was an excursion to the far reaches of the region, the monastery of San Biaggio near Nocera Umbra, about an hour's drive from Cannara.  Over the three years that we have had a base in Umbria, we had yet to visit this remote corner.  Our purpose for visiting the monastery was as much to pursue a new adventure as for the leisurely lunch and a beer tasting that the day promised.  San Biaggio, in addition to being a relais with a small handful of comfortable rooms is a microbrewery whose beers we have enjoyed in the past.  Our plan for the day was to visit and taste them at their source.

The drive to the monastery is surprisingly easy.  For most of the drive we are on a very good state highway, but turn off on a dirt road, which the Italians descriptively call a strada bianca, or white road, for the last 10 minutes or so.  We are in three cars, two of which have their own GPS, which, unbeknownst to us in the lead car, are directing us to completely different destinations.  However, everyone follows us and before long we arrive at the somewhat poorly marked relais, not sure where to go or who to see.  In fact, the front desk is completely abandoned, with paperwork and a small amount of money sitting out for the taking. 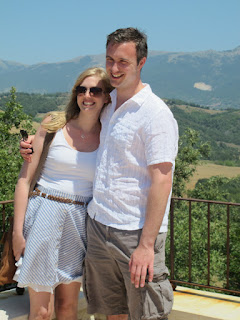 After wandering around a bit we finally happen upon Fabrizio, the manager of the property and our host for the day.  Incredibly we have arrived early, a first for us here in Italy, and we are told we can wander around the property for a few minutes while they get the table and meal prepared for us.  We bask on the rooftop of the restaurant for the next ten minutes, enjoying the breathtaking views of the valley below and the surrounding hills and mountains that ring this isolated ex-monastery. 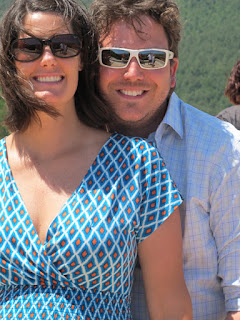 As best as I could later gather from Fabrizio, most of which is probably completely incorrect due to my dubious Italian, the monastery and its outbuildings were built around the year 1000, originally as a pagan house of worship and then housing knights Templar.  It was converted to a Christian monastery around the 1500s and was later abandoned, falling into disrepair and eventually collapsing from earthquakes and age.  Fabrizio's family purchased it in the 1970s and began the complete restoration of the property, which consists of a complex of several buildings, with a handful of comfortable rooms, a beautiful restaurant with panoramic views of the hills and, importantly, a brewery. 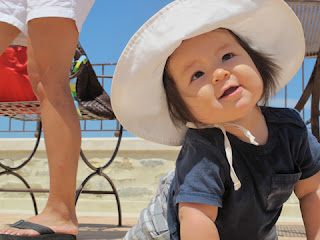 But as lovely and as well done as the restoration is, it is the setting that is truly extraordinary about San Biaggio.  You have to give credit to the monks or others who originally established most monasteries.  They generally pick the best location.  Maybe it's just because you could find a good deal on real estate back then, but our other recent monastery experience, staying at an ancient monastery near l'Aquila in Abruzzo afforded the same type of ridiculously perfect panoramas and complete isolation and tranquility.  Both features were found at San Biaggio in spades.  Far from the highway, no traffic noise spoiled the quiet calm here, just the occasional chirping of a cricket, the gentle song of the birds and the soft rustle of the trees.  From our vantage point on the restaurant's rooftop we soaked in the warmth of the sun and the soothing sounds of nature until a few moments later when our tables were ready. 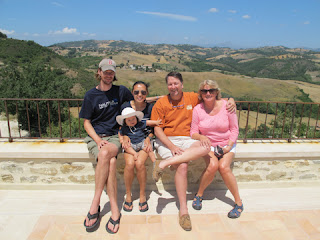 For the next two hours we enjoyed a simple four course lunch, modest portions of uncomplicated but satisfying food featuring a number of dishes featuring the relais' home grown or local ingredients, including the delicious sliced meats and salamis made from their own miale nero (black pigs).  These meats were perhaps a little gamier than their more domesticated cousins and the fatty parts softer and creamier.  Each course was complemented with one of the four different beers handcrafted (why are beers and suits, and sometimes french fries, always handcrafted?) by the brewery - a weis, a pils, an ale and a red beer.  The last was paired with a rich chocolate cake, an interesting pairing but one which was a good finish to our meal.  For a country that is decidedly a wine country, it was a pleasure to drink good local beers and to see them matched thoughtfully to the local food.  This change of pace was especially well received by Joe, our guest from England. 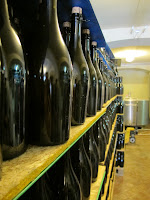 After lunch we were given a tour of the brewery, a small operation in one of the outbuildings on the property.  There, Michele, a surfer looking dude in spandex and rubber boots and a completely disarming smile demonstrated to us the entire production process, from the malt and hops and yeast to the machinery for mixing and fermenting the beer.  When asked if there was a long tradition of beermaking in this area he replied that there was not, but that the area produced much of the needed ingredients, including pure spring water for which Nocera Umbra is known.

After the tour Michele insisted that we sample the Monasta ale, which we had tried at lunch, but which he insisted was completely different here at the brewery.  He opened a few bottles, which at 66cl are nearly the size of wine bottles, and poured a quite generous portion for each of us (a nearly empty mug on the desk in his office indicated that he had been engaging in quality control even before we arrived for the tour).  It was indeed different, and better than what we had drunk at lunch, a sweeter, more satisfying taste.  He showed us the secret ingredients of the ale - local honey (which was stored in an enormous plastic bucket containing maybe 10 gallons of thick, grainy honey) and local alloro (laurel or bay leaf).  After receiving the visual cues, we could really taste the honey and laurel. 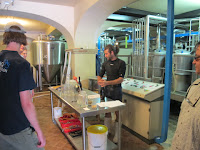 As we settled up and said our goodbyes an official police looking vehicle arrived and we were slightly worried about impending breath tests.  Two members of the corpo forestale, Italy's national park police, got out of their car and wandered about the property, waiting for Fabrizio.  As we got in our car to leave, he emerged from the relais' office with a couple of bottles of Monasta to share with his local friends, much like the proprietor of a 7-11 or Dunkin Donuts might with the local constabulary back home (substituting coffee and donuts for the beer).

Returning to the villa well fed and cared for, the group began its final evening.  Couples disappeared to begin the arduous packing process, trying to fit new purchases and memories into suitcases that were too full even upon arrival (at least one couple had the foresight to purchase an additional suitcase the day before).  On our end, the business of closing out one group and preparing for another began, as well as, more importantly, preparation for final night's pizza dinner.

Although our original group was smaller by two as a result of that morning's departure for Rome by Jeanne and Kevin, we planned to more than make up for that by inviting four local friends to join us.  Over the next several hours a steady stream of a couple of dozen fresh, hot pizzas snaked their way from the outdoor woodburning pizza oven to the table, with half of our guests opting to stay in the kitchen to create designer pizzas from the bowls of various  toppings prepared earlier in the evening  - fresh vegetables, truffle, meats from Norcia and local cheeses - rather than sitting and eating.  The whole affair was overseen by Chef Rich, with able assistance from our late arrival, Pete, himself and amateur chef returning to the villa for the fourth time.  Finally everyone emerged from the kitchen and around the oven and finished off the pizzas,  which were complemented by the day's beer acquisitions as well as some homemade beers brought over by our friend Marco, as well as plenty of local Montefalco wine.

Despite promises of an early evening, the last nutella pizza and dish of homemade sagrantino passito ice cream were cleared after midnight.  A small handful of brave  (or misguided) souls opted to stay up past 3pm, unwilling to let the week end or, more likely, to leave the table while there was still wine to drink.

The next morning brought the sad duty of saying our goodbyes to our new friends whose friendship had been forged around the table and through and intense week of shared experiences.  At Umbria Jazz we listened from the front rows to Herbie Hancock, Carlos Santana and Gilberto Gil.  We travelled together to the far reaches of Umbria to sample artisinal beers and to see an expert norcino (pork butcher) ply his trade. We studied cooking and life under Salvatore and cooked at home with Simone.  We tasted wine with the Pardis, bought their fabrics and tasted olive oil with Irene.  Along the way we had countless dinners under the stars and drank even more countless bottles of wine together.  Under these conditions friendships can grow in a fraction of the time required in a different setting and under different circumstances.  And it is perhaps why, under these conditions, we have been fortunate to develop a whole new set of friendships that makes this place home.

As we depart for the next chapter of our trip - a two week sojourn to the north of Italy with Pete and Nancy - we are certain that we will miss our new (and old) friends, and we think they will the same.  We all depart for different destinations with promises all around to keep in touch and to visit one another in the future.  And in this land where friendship finds as fertile a soil as do tomatoes, less than 12 hours later part of our group is convening its very first reunion - dinner in Rome at Salvatore's restaurant there.  We hope it is the first of many.