Serve No Swine Before Its Time 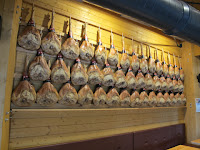 Italy is rightly famous for its prosciutto, the cured, aged and I might add, delicious meat from the leg of the pig.  Most Americans have only a passing familiarity with prosciutto, enjoying it in an Italian restaurant served in thin strips alongside slices of ripe cantaloupe.  But here in Italy prosciutto is a religion and today we taking a pilgrimmage.  So late in the morning we set off for a visit to one of the two holy lands for lovers of the salty, sweet pure pink pleasure.  We are off to San Daniele.

The drive to San Daniele takes a little over an hour from la Subida, the inn which has been our home for the past several days.  To get there we pass Udine, the capital of Friuli and one of the largest cities in the north of Italy.  This part of Friuli has a definite germanic feel due to its proximity to Austria.  Here the hills begin to rise into mountains and villages dot the landscape with architecture more common to Heidi than to il Postino.  Large industrial zones flank the highway and there are big box stores and shopping malls that sadly attest to the Americanization of Italy and signal its inevitable decay.  But despite all of these cultural invasions, there is something quintessentially Italian about this area, a reason it is stuffed into the corner of this hodgepodge of a country and not a few miles away in a land that flies a different flag.

One such Italian oddity is the giant chair.

The giant chair takes you by surprise as you speed along the highway.  As you approach it, the empty stretches begin to give way to signs of a settlement and manufacturing businesses begin to pop up along the roadside.  There are many lumberyards and a good number of showrooms displaying furniture in their windows.  As you near the center of this town, the shops and factories become denser and you get the sense that this is a furniture building town.  And then you see it.  The giant chair.

As you approach the main intersection in the town of Manzano, set back from the highway on the right is a giant chair.  That's all.  A giant chair.  No signs, no giant ottoman or oversized remote control.  Just a single chair, possibly 50 feet high sitting all by its lonesome with no one to use it, waiting against hope for a 150 foot person to give it true meaning.

It must have some meaning for the locals but it simply sits in a field now.  This part of Italy faces a constant onslaught from Austria, from Germany, from America.  But as long the Italians continue to celebrate their identity with a giant chair, there remains hope that they can keep the barbarian hordes at bay a little while longer.  Let's hope so. 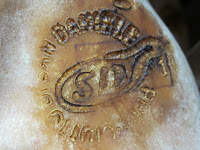 When approaching the little town of San Daniele, poised perfectly over the verdant valley below, it is difficult to imagine a more perfect place on earth.  Unless you happen to be a pig.  Over a million and a quarter pigs give their legs, literally, to this town, which produces two and a half million prosciutti a year.

We circle the historic center of town, sticking to the perimeter where many of the two dozen or so of the town's prosciutterie seem to have set up shop.  And soon we are pulling into the parking lot of Prosciutteria dall'Ava, a second generation business that is without doubt the hippest, most stylish house of pork leg in this city of pork.  What Salvatore Ferragamo was to women's shoes, Carlo dall'Ava is to pig legs. 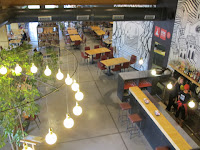 The newly constructed prosciutteria is modern, trendy, state of the art.  It houses computer controlled curing rooms in an enormous building that looks as though it could have been designed by Mies van der Rohe.  Connected to the production facility is an enormous visitors' center that houses a restaurant, a butcher counter and a gift shop.  Electro music thumps in the background while stylish waiters and staff, dressed in matching uniforms glide past giving the room more of a disco feel than a house of slaughter.  But in this cutthroat world of sliced meat, branding seems to have assumed a great importance and dall'Ava has built an unmistakeable brand.

But it is the light pink, thinly sliced meat that is and always will be the star of the show.  Prosciutto di San Daniele is just plain great. 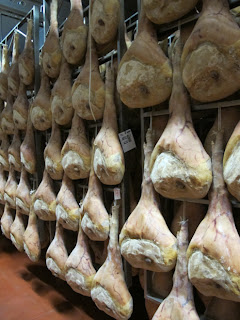 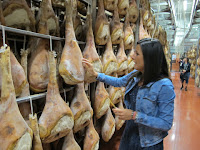 Visiting the Prosciutteria Dall'Ava is time well spent.  Our tour of the facility, conducted in English by a well trained and well spoken guide is eye opening and the visuals are great.  Room after room of 20-30 pound pork legs unfold, each leg still sporting the runner (this is a visual cue that distinguishes prosciutto di San Daniele from its prosciutto di Parma counterpart), the cured legs hanging from metal racks from floor to twenty foot ceiling, the racks extending dozens of feet deep.  We are told how the producers in San Daniele receive truckloads of pig legs from the best producers across Italy, as the farming of pigs locally has died out in the recent past.  Here the legs are washed and then covered with salt for up to a couple of weeks to begin the drying process (the salt draws the liquids from the meat through osmosis and does not flavor the ham).  Then before the curing process begins, experts express any remaining liquids (read blood) out of the femoral artery, a process that is essential to ensuring a good prosciutto.  Then a paste of fat and flour called stucco, and which resembles the stucco applied to the outside of a house is slathered over the open end of the leg to seal it from contamination and the leg is hung on a rack.  Over the next 16 months the leg is left to cure naturally, except it isn't natural. 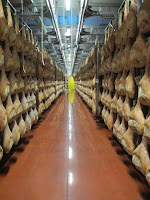 The entire enormous curing rooms are computerized sterile enviroments designed to mimick nature.  Whereas in the past prosciutti were hung in wooden open air rooms that allowed the area's fresh breezes and natural temperature changes to do their work slowly, over time, the temperature, humidity and air circulation in the modern curing rooms are controlled to ensure the optimal curing process.  Essentially that process is a long, slow process of allowing the meat to expand, as the weather warms, and contract, as winter arrives, drying the meat as it naturally squeezes the liquids from within.  In the summer, legs would be moved outdoors so they would be washed by summer rains.  Inside the modern curing room rain storms are simulated in washing rooms. The curing rooms essentially recreate naturally occuring weather conditions over a year, ensuring that each leg will dry as nature intended, but sometimes is too fickle to allow.  In its curing rooms Dall'Ava uses computerized technology to reproduce the ideal natural conditions, which may seem a touch ironic.  But what they don't mess with is the process itself.  Nothing is added to speed up the curing process, which takes the same amount of time from start to finish as in olden days.  They simply guarantee the proper weather conditions. 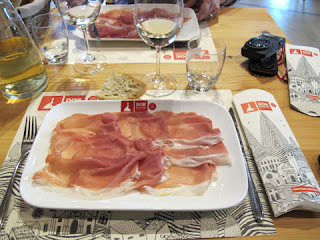 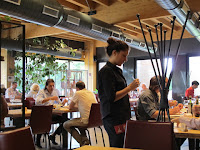 After the tour we sit in the hip restaurant/tasting room and each enjoy a plate of San Daniele.  It is soft, sweet and slightly smoky tasting (although there is no smoke added in the process).  And judging from the tasters at our table and throughout the cavernous room, it is undeniably tasty.  It is so good, in fact, that we abandon our lunch plans in Udine and decide to try another sampling, this one including a version of prosciutto using special Hungarian pig legs (Dall'Ava prepares "prosciutto" from these Hungarian legs as well as versions of Spanish black pig and a special one for the U.S. market that is derived from Italian legs, with the hoof removed.  They even are planning to set up facilities in China using local pig legs there).  Over the course of our makeshift lunch the restaurant fills up with dozens of diners, mostly local businessmen and workers for whom prosciutto is not just an occasional luxury, but an essential way of life. 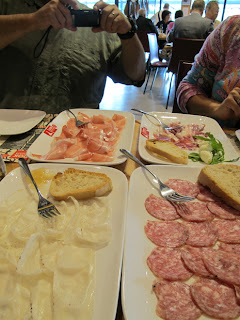 I guess this is what makes an Italian an Italian, as opposed to a German or an American.  Passion and pride for the same pig leg their father ate and their father's father.  Now after lunch, if we could only find a 50 foot chair to relax on.

Ci vediamo!
Bill and Suzy
Posted by Bill Menard at 3:31 AM