Today is cooking class day.  Friuli style.
We drive to nearby Cividale to meet Sonia, the entrepreurial Friuli native who with her husband operates Discover Friuli, a local travel business promoting this area and who has done a good job attracting business from America through her internet advertising and her understanding of American tastes from her time spent studying in the states.  Suzy and Pete, our amateur chef, have organized this excursion and both are clearly excited for what today promises - an opportunity to learn the secrets of la cucina friulana.  This is Suzy's second trip to Friuli and she has researched and put together a list what are considered to be the typical dishes of the region, exotic and unItalian specialties with a Slavic twist, dishes that feature ingredients such as kren (horseradish), stuffed gnocci, cabbage and kraut.  We have tried some of these dishes along the way and today we hope to learn how they are made.

We meet Sonja at her office in Cividale, a bustling town about a half hour from our hotel.  She is bubbly and speaks excellent English.  She gets her car and escorts us to the house of our chef, Rozina, who lives a few minutes from the center of town.  We arrive at our destination and are greeted by Rozina, a solid, deliberate woman with a broad and warm smile.  From the outside the house looks simple but, like Rozina, the inside is impressive in it orderliness, intelligent layout and good taste.  The kitchen is ideal for hosting a group of our size.  It is spacious, well organized and very well equiped.

Sonja, who is well prepared for the day's activity,  hands out the menu for the day.  As she passes them out, she reads and describes what we will be making.  It is not at all the Friulian menu we imagined, but a more typical generic Italian menu - bruschetta with pomodoro, pasta with pesto genovese.  By the time she says we will be finishing with a tiramisu for dessert, you could almost see Suzy's eyes tear up.  The menu does contain one nod to Friuli - we will be making a typical frico - a fried cheese and potato dish that is a staple in this area.

The menu is the result of a lack of communication between our party and Sonja, a lesson we all discuss later that day.  The dishes that have been proposed and which Rozina has already done a significant amount of prep work for, are indeed eaten here in Friuli.  They are, in a sense, universal Italian dishes.  But they are not the heart and soul of the Friuli cuisine, which is what we have come to learn.  There are disappointed looks on Pete and especially Suzy's face, and a lot of turned down gazes.  Accepting our fate, which is not one of Suzy's strongest traits, she comes up with a semi-solution, explaining to Rozina and Sonja our original goal of learning about la cucina friulana, and suggesting that as we make the generic dishes Rozina can talk to us about the typical cuisine as we cook and how it might differ from what we are preparing.  Rozina offers to make some adjustments in the menu, but the ingredients for the original menu have been bought and prepared and explains that some dishes would require excessive preparation time, such as boiling potatoes.  If we were to make major changes to the menu it would throw off the timing and sequencing of finishing the various courses and our meal at the end would suffer. Pete assures her that we wouldn't mind the dishes coming out in the wrong order and the gears in Rozina' mind begin to spin as she considers an alternative menu.  Yes, she has some vegetables in the garden.  We would need some more potatoes and a few other ingredients from the market.  Yes.  This can be done.

Sonja, whose gives the impression that her soul purpose in life is to make you happy and to promote Friuli  off to the market to pick up the additional ingredients that she and Rozina have worked out.  As she walks out, I ask her one more request, that she also pick up a store bought gubana, a strudel-like local dessert that takes two days to prepare.  If we can't make it, at least we can eat it.

With our translator gone for a few moments, Rozina begins telling us about the food culture in Friuli.  Gnocchi made from potatoes can be small bite sized pillows, which are familiar around the world,  and served with a sauce.  But here in Friuli they are often made large and stuffed with a variety of items, from meats to cheeses to vegetables and even to sweet fruits, plums (susine) being popular at this time of year.  Frico is a very traditional dish here as well and can be made two ways - one with cheese scalded into thin disk in a skillet or with an mixture of the local cows milk cheese - montassio or latteria - of different ages added to boiled potato and baked in a skillet to make a thick, fluffy pie resembling a spanish tortilla.

By the time Sonja returns with the potatoes we are already steeped in the food culture of Friuli and find ourselves interrupting Sonja as she attempts to guide us, telling her that Rozina has already explained such and such to us, our group's lack of fluency in Italian having not stood in the way of our complete understanding.  Food, as we have seen before and as we experience constantly on these trips to Italy, is a universal language.

I guess that's why they talk about the native tongue.

Over the next couple of hours we cook and talk, communicating at an elemental level, Sonja keeping everything moving along as we chop, roll and bake.  Each of us makes a frico croccante, the crispy variety of frico, which entails sprinkling spoonfuls of grated montassio cheese, the denser, more aged variety of which is very similar to parmigiano, into a thin round layer in a heated skillet, then putting the skillet on the fire.  As the cheese begins to melt and bubble the edges are scraped back to create a defined border and the disk is separated from the bottom of the skillet.  When it is completely separated, the pan is removed from the fire and the cheesy disk is flipped by hand back into the skillet and the other side browned.  A minute later it is lifted by hand from the skillet and draped over a glass so that as it cools it takes the shape of a cheese basket.  To this, a scoop of polenta is added, the whole thing looking like a bowl of ice cream.  Friuli gelato.

We chop the various montassio cheeses into cubes and combine them with boiled and slightly smashed potatoes adding a little shredded onion to the bowl.  The combination is then mixed by hand and placed in a skillet.  As the temperature in the skillet rises, the cheeses begin to melt and combine with the potato and the whole gooey mass is stirred.  After ten minutes or so, the cheeses have completely melted and all has been well mixed, and the heat is lowered so the bottom layer begins to brown.  Rozina then shows us the dangerous process of flipping this fluffy torte, making sure to drain off as much of the scalding fat that has separated from the cheese.  The flip being accomplished the frico is put back on the fire to brown the other side.

In the meantime, Rozina takes us to her garden to collect some herbs and greens to fill our gnocchi.  Her garden is not a rectangular plot with orderly rows of plants marked and tied up, but rather patches here and there of delicious looking future dinner ingredients and bouquets of aromatic herbs that sprout up in clumps and give off a subtle and delightful aroma.  We pick a very small handful of greens and herbs (Rozina explains to us that we are only going to make a small amountof  gnocchi) and head back to the kitchen, stopping first to see the adorable bunnies in a small pen in the yard.  Their cute innocence is shattered, however, when we realize that they are not pets but ingredients too, a fact confirmed by Rozina with a slight bit of embarrasment. 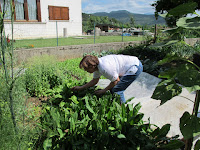 But it is the Friuli way.

We set ourselves back to the task of making our Friuli feast, rolling out dough for the gnocchi which we have made with the boiled potatoes and flour.  A filling made from herbs and greens, which have been boiled or sauteed, then thoroughly dried and cut into small bits with scissors, is at the ready.  The dough is separated into two batches, one for traditional small gnocchi, one for our large filled gnocci.  For the small gnocchi we roll out long strands of dough, a little thicker than a pencil, and simply chop off inch long segments.  It is simple, even for our group.  The gnoccho (gnoccho is the singular form of gnocchi and is often used to denote a large gnocchi as only one is likely to be served) is made by rolling the dough into a thin rectangular noodle with a slight indent running down the middle.  The filling, the aromatic herb mixture in our case, is spooned onto the indentation and formed into a little ball.  Several of these balls are placed a few inches apart and then the pasta ribbon is folded back on itself along the axis of the indentation, which produces a longer noodle with the filling inside.  The whole process is similar to making a ravioli, and after sealing off the filling by pressing down on either side of it a drinking glass is used to cut the filled gnoccho from the ribbon of dough. 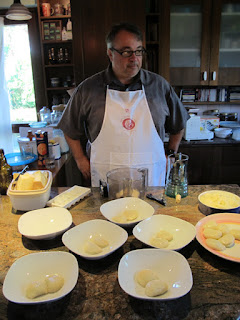 Our final dish is a simple winter dish that combines well known flavors in an unusal way.  It is salame and onions and consists of stewing slices of broad homemade salami with sliced onions.  The stew is flavored with wine vinegar and wine to give it an exotic, Eastern European feel.

After several hours of improvising and working together, the final dish is complete and we sit down at the table with Rozina and Sonja to enjoy our handiwork.  We are warned that it would not be typical to eat all of these dishes together, but we are unconcerned today, for they are authentic and tasty.  And thanks to the kindness and flexibiity of our hosts, we have not only experienced la cucina friulana today.  We have been inside their homes and seen what makes this region truly special.

Ci vediamo!
Bill and Suzy
Posted by Bill Menard at 2:32 AM

Great save, as usual!