It's been a little over a week since we arrived in Italy.  We haven't yet hit double digit weight gain, but we're working on it.


Our adventures have taken us from Rome (briefly) to the sandy beaches of Sardinia to Orvieto (overnight) to our beloved home in Umbria for a week of Umbria Jazz and a terrific group of about a dozen guests.  While this may all sound exciting and adventurous, life has settled into a bit of a routine.  And with yesterday being taken up with a long business lunch that I'd prefer not to write about and another UJ concert (the incomparably cool Carlos Santana) and with a certain level of fatigue having settled over our bodies, the result of too many late nights, too much feasting and too much wine and grappa, I think it is high time to step back and reflect a little on where we have come from.

So today begins an occasional retrospective series, done mostly in pictures and with some running commentary.  Because a picture is worth a thousand words, even at the current Euro-Dollar exchange rate.  So think of these as very wordy essays. 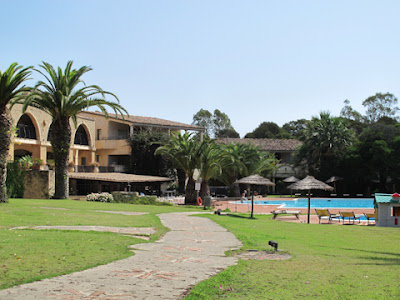 We arrived in Sardinia at our resort hotel, the Costa dei Fiori, mid afternoon on Monday after a flight from Rome to Cagliari.  Sardinia was a late addition to the itinerary and we had to struggle to find a hotel at a reasonable cost.  Some of the resorts up north in the super chic Costa Smeralda area cost upwards of 1000 euros per night.  Just down the road from us, the Forte Village Resort was also out of our price range, but as  we drove past it daily on our way to some remote beaches, we counted our blessings that we hadn't spent the money.  There were literally a thousand cars parked at the Village.  Not our idea of a relaxing vacation.

The Costa dei Fiori, on the other hand, featured a serene layout, with wooded areas, a couple of nice pools (one an infinity pool overlooking the ocean), gracious service and a decent room at a decent price.  It was inevitably resorty, and as a result, full of resorty people, mostly Brits, who wanted to take advantage of everything included in the price.  Including the not so special dinners.

We chose the Bed and Breakfast plan so we could try the local cuisine.  It was a supremely good decision.

Sardinia is a land of natural beauty, wild and untamed, with vast areas of unsettled mountainous scrub.  In the south, where we were, there are few good roads to take you east-west.  It takes quite a while to get anywhere.  But what's your rush?

There are beautiful, white sandy beaches.  Some are deserted and wild, others with chairs and umbrellas, a definite magnet for guys in speedos. 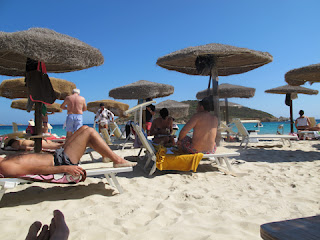 There are beautiful panoramas. 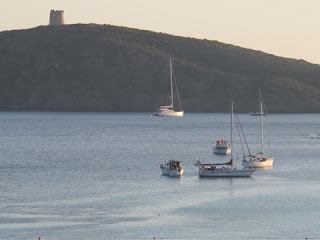 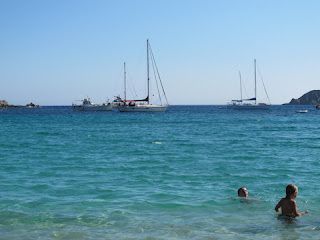 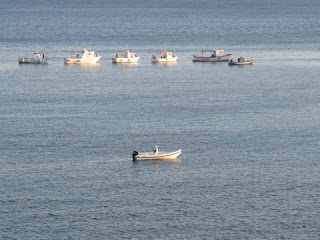 Oh, and did I mention the food is great? 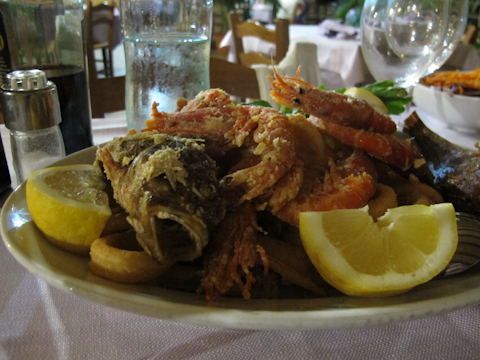 You can sit on the beach and read a book or partake in some physical activity. 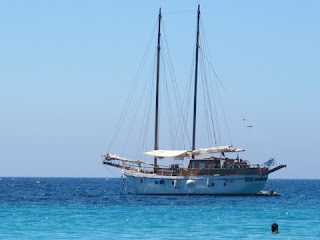 Oh.  And did I mention the food is great? 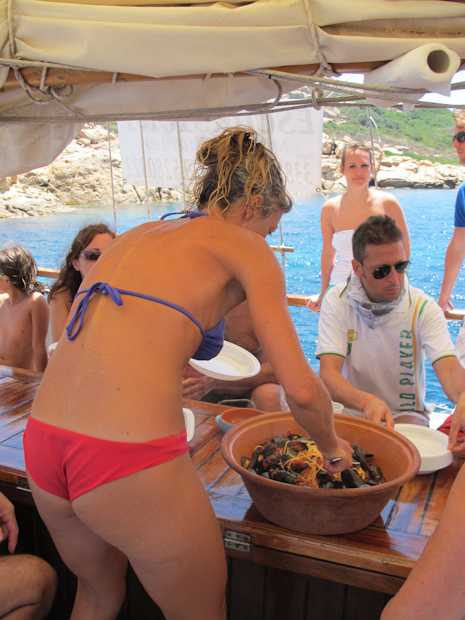 We had a wonderful couple of days on Sardinia and look forward to a longer return some day.  We have a four day trip to the idyllic island of Ponza later in the trip.  I just hope my speedo will still fit then.

Ci vediamo!
Bill and Suzy
Posted by Bill Menard at 4:30 AM