Venice - From Sole to Heel

After a morning coffee with Jill from Caffe del Doge and our new friend Theresa we spent the morning and afternoon cooking with Venetian native Patrizia at her beautiful palazzo near San Marco. (see liveblogging video footage).  Although we had hoped to meet the cooking group as they toured the Rialto fish market, one of the truly don’t miss experiences of any visit to Venice, they had departed for Patrizia’s palazzo just before we arrived.  We did a quick round of the outdoor market, snapping some pictures and sorry that we had not been able to get a native’s explanation of the variety of strange fish with unrecognized names that are displayed on ice in this covered market.  We then dedicated ourselves to the task at hand, trying to find a Venetian address armed only with the sestiere number.  After a few false starts we arrived at Patrizia’s apartment, called upstairs and were buzzed in by Patrizia’s husband, lovingly referred to by her as “Cinderella Man,” presumably because he does the grunt work to Patrizia’s evil step sister. 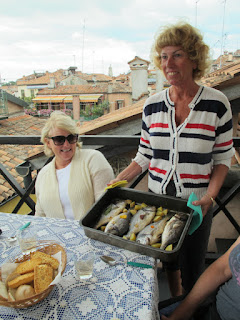 We spent a the next three and a half hours under Patrizia’s somewhat eccentric (this is quite the understatement) guidance and in the company of a lovely group of Australian women who were doing walkabout in Europe for several months.  The class itself was a bit of a disappointment for those wishing to participate hands on and learn some insider’s technique, but we did get to clean and prepare a whole orata (while learning about its sex life, that being a sort of constant theme of the day) and spend time with a lively group of Aussies.  The view from Patrizia’s rooftop terrace, where we ate our handiwork, was worth the price of admission.


Frankly, after the rambunctious, double-entendre filled afternoon with Patrizia, the only cure was a drink.  Or several.  So we followed Patrizia’s with an organized walking tour that called itself a "pub crawl."  Starting at Ca Rezzonico we traversed practically the whole of the Venetian archipelago, stopping in 4 taverns for ombra and cichetti, the Venetian tradition of light cocktails and fingerfood.  Along the way we enjoyed the company of an extended family from New Jersey and Florida and a solo traveller from Canada. We also made friends with Alessandro, who introduces himself as Alex for the benefit of his English speaking clients, the charming native tour guide who led us on the two and a half hour excursion.

While the tour was fashioned as a pub crawl, in reality it was a historic walking tour of this ancient republic.  While we camped in the several taverns we visited, Alessandro held court about the wine and food, as well as the history of the buildings that now housed these taverns, some of them dating as far back as the 1300s.  Between taverns he regaled us with a living history lesson of the city, showing us its dozens of historic churches, the important artwork they contained and glimpses of life under the Doges.  All in all it was a very worthwhile couple of hours, even if it resulted in sore feet.

Ci vediamo!
Bill and Suzy
Posted by Bill Menard at 2:35 AM