For the past 48 hours we have been testing whether it is possible to overdose on joy.  Put simply, we have flowed from one joyous moment to the next.  And I'm happy to report that we're still standing.  Even if we may be spinning. 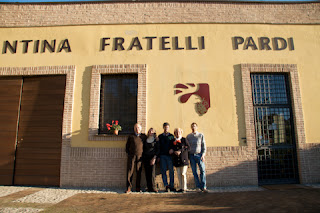 Wednesday marked the wine tasting day of our weeklong Umbria Jazz tour.  Our villa is located just outside the borders of the Montefalco D.O.C. wine zone and we have become huge fans of the area's tangy white wines and bold, rich reds.  So that morning we planned an excursion to one of Montefalco's best wineries, operated by the lovely Pardi family.

The Cantina Fratelli Pardi is located alongside the Montefalco city walls, a short 20 minute drive from the villa.  Over the past three years we have developed a deep friendship with the Pardis, taking numerous groups to visit the winery and to share lunch with Alberto and Linda, their sons Albertino and Gianluca and the inimitable Augusta Pardi.  In addition, we have enjoyed their company at our villa and visited with Albertino on his business trips to the U.S.

Warmly welcomed by the Pardis on our very first visit, our friendship with them has grown and deepened over the years, and as we arrived at their ochre colored cantina emblazoned with the silhouette of a falcon holding a bunch of grapes and the words "Cantina Fratelli Pardi," we were greeted with much cheek kissing, firm embraces and kind words of welcome.  This is a ritual in Italy, but rather than an empty gesture, a Pardi greeting is underscored with a true warmth and kindness.  Our group, none of whom had previously met the family and some of whom were novices to Umbrian wine were immediately welcomed and made to feel at home.  That is the Pardi way.  Conversations erupted in Italian and English, with a vigorous Spanish one going on between Linda, who is originally from South America and one of her relatives who was joining us for the afternoon and Rich, our chef friend from New York, who happens to be a fluent Spanish speaker.  The various linguistic centers of buzz gave a powerful energy to the large reception hall where tables had been set up for our wine tasting and lunch.

For the next two hours our group of twenty or so was treated to Linda's home cooking and Alberto's insights about his wines.  Conversations shifted from one subject to another, the various conversations merging and combining and recombining among different groups and different subjects.  Throughout, Augusta, a tall regal woman who personifies the term gentlewoman, would punctuate the conversation with another welcome or thank you, a simple geture that helped maintain the ease and naturalness of the conversations and relationships that had been born only an hour before.  Such is true graciousness that it can instantly create strong bonds between people where they had not existed before.  This is a gift of the Pardi family and of Augusta in particular.

After lunch, which was capped off with a glass of the Pardi Sagrantino Passito, a softly sweet, slightly thick wine made in the traditional manner from the area's famous sagrantino grape, Alberto led the group on a tour of the winery, explaining each step of the wine making process, from the harvesting of the grapes to the bottling of their award winning vintage.  We have been on dozens of similar tours at the area's wineries, but this one stood out due to Alberto's obvious passion for his wine and the territory.  At every turn he would tell a story about how the family's obsessive pursuit of quality had driven the process.  It was obvious in every sip we tasted but it was obvious, too, in the words that he was telling us.

Nearly four hours after we had arrived, we were done with lunch, wine tasting, touring and, of course, buying a few cases of wine so we could relive the experience back at the villa.  And it was on to the family's tessitura, or linen factory, in nearby Bastardo (the sign to the town is perhaps the area's most photographed attraction) for a tour of the looms and, perhaps, to buy a few souvenirs.

We arrived just before the looms were being shut down for the day, our schedule having slipped from our long lunch and lingering with the family at the cantina, but Augusta kept the facility open for us so we could see the machinery working and understand how these fine fabrics are born.  The main fabrication area, an enormous room with dozens of clanking machines, each the size of a dining room table, was a whir of activity.  Spools of threads unrolled as strands were woven into the nascent fabric by the clanging back and forth of shuttles, while control rods opened and closed hundreds of stitches, the whole process controlled by yards-long stacks of punchcards, the holes in each of which directed stitches to be held or dropped.  Meanwhile, emerging one thread at a time from the end of the loom, beautiful jaquard patterns made from luxurious silks, cottons and linens were being rolled into bolts of fabric, with intricate lace patterns or embossed designs like bees, seashells and the like woven into them.  Augusta tried her best to explain the operation of the various machines, but given the incredible complexity of the machinery and the roar of their work, we satsified ourselves with taking away the mystery of it all unsolved.

Our group then retired to the showroom where samples of their artistic fabrics were displayed and spent a good while making the difficult decision of which ones not to take home with us.  Table cloths, towels, bed linens and scarves were stroked, nustled, awed at and finally purchased.  And when they arrive at home and are laid on the table or placed in the lap their beauty will be augmented by the stories locked inside each piece, stories known and felt only by those who had the privilege of seeing their creation and of getting to know the men and women of the Pardi family and the their loyal workers, and truly understanding how important the creation of beauty and quality are to them.

The symbol of the Cantina Fratelli Pardi is the silhouette of a falcon.  The symbol of the tessitura is a shuttle, which contains the bobbin used in the loom.  But the symbol for the Pardi family itself should surely be a pair of outstretched arms, for the welcoming embrace they give to all gives a comfort and joy that is truly unique and special.

Ci vediamo!
Bill and Suzy
Posted by Bill Menard at 2:45 AM

Yes, yes, I understand about Umbrian hospitality, and the genuine warmth and friendship stuff, and yes, their wine is fantastic and the linens are beautiful, but Bill, you've got to realize that you're only returning to Pardi's over and over because Suzy knows how drop-dead gorgeous Albertino is......Thanks for sharing!

Yeah, Albertino is pretty darn cute. Is he taken?