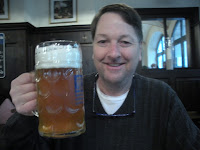 Munich is going to force us to rethink what we think about Germany.


Originally planned as a stopover on our way to Italy after picking up our car, we added a second day to our Munich visit on the advice of a friend of ours from Washington. Simply put, we wouldn't be able to visit all the beergartens and try all the different foods he recommended in the one day we had originally planned. Thinking it would be a good place to get over our jetlag before our "real trip" started in the Alto Adige region of Italy, we decided to extend our German visit by a day.

Thank you, Mike and thank you Germany. This is a place worth a much longer visit and definitely worth a return. There's little chance we'll return home eager to open a new "Bella Germania" store, but there's much to like here.

This trip has largely been organized as an excuse to visit the northeast of Italy, spending several days in the Alto Adige region that borders Austria, the Veneto region north of Venice and Friuli, the region bordering Slovenia. The main attraction is the wine of these regions, especially the whites of the Collio region of Friuli. We have been reading, studying and tasting these wines for months in anticipation of our visit.

But along the way, here in Germany, we have fortunately found the time to enjoy this country's passion - beer. I am certainly no expert in beer, I leave that to my nephew who recently opened an amazing tavern called the Broken Barrel in Palm Bay, along central Florida's space coast. There he features hundreds of bottled beers from around the world and dozens of beer on tap. He is an afficianado and expert in beer the way Robert Parker is to wine. We have stopped by several times and each time learned a little more about how his beers are made and how rich, complex and enjoyable they can be. Just like wine, however, there is something just right about experiencing a beer where it was made. Natural selection, perhaps, but food and wine (and beer) taste better and the experience is more organic, more authentic and mo' better when experienced at the source.

Thanks to our friend Mike's suggestions we started our beer tour in an old and atmospheric tavern called Andechser am Dom, a crowded, boisterous restaurant with a (semi) outdoor beer garden that we would never have had the fortitude to visit had we simply been passing by. It seemed just too crowded and inaccessible to our inexperienced eye, but we had been told that you simply find an empty space at a table, ask if it is frei and proceed to try to keep up with your tablemates.

We did so, finding two incredibly cramped seats at the end of a table in the back corner, wedging ourselves between a large group of middleaged Germans and an older mother and her daughter. The table was littered with enormous glassware and a couple of baskets of delicious pretzels. Some of the patrons were eating meals, others enjoying beer only. The roar was deafening, but clearly less so than the room next door, which we could see through the long window and which apparently was a standing room only bar and smoking area, jammed so tightly with smiling, drinking, shouting Germans that it almost looked fun. 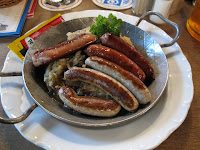 Back at our table, we ordered the fleishpfanzerl, a pair of delicious veal patties, lightly fried and served with (of course) cabbage and a roasted pork "knuckle" which was an absolutely enormous shoulder or leg joint cooked so that the meat was still moist and bathed in its juices with a skin that was crackling and mouthwatering. During our next day and half in Munich we saw this dish served in many restaurants, but none were as gigantic or looked as tasty. 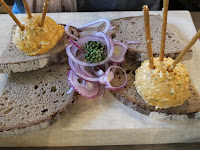 All this hearty food, served in an insanely loud and boisterous atmosphere cried out for beer and its cries were heard. We tried everything we could pronounce and then some. Out would come a pair of glasses seemingly a foot high, filled with cloudy yellow weiss beer or dark, slightly sweet dunkels. Whatever our waitress brought next was as good or better than the previous one. After several hours we sloshed back to our hotel.
This whole routine was repeated the next day as we lurched from place to place trying weinerschnitzel, so enormous that it hung off the side of the plate, metzgerpfandl (an assortment of Bavarian sausages that included regenzburger, schnepswurschtl and nurnberger served (of course) with sauerkraut and a local cheese dish called obatzda, served in two enormous dollops on sweet dark bread with sliced red onions. The perfect accompaniment for these dishes? Why beer, of course!

Being good tourists we felt that we had to visit the famous Hofbrauhaus, a place I last visited some 30 years ago with a couple of college buddies. If memory serves me correctly, and it does not, the place has changed little since then. Tourists and locals mingle together at dozens of wooden tables flanked with benches. A small platform is home to an oompah band that every few minutes plays a drinking song requiring everyone to have a swig. And waiters and waitresses deliver food and beer, but mostly beer, served in enormous steins that weigh a ton even when not filled with the gallon of beer that can take an hour to drink. These mugs are so large a small family could probably find shelter in one. So large that when one says he is sitting in a cold draft he literally could mean he was submerged in beer in one of these, rather than suffering from a cold wind. These mugs are large.

And so our brief stopover at the Hofbrauhaus turned into a several hour affair, enjoying the beer, the music, the crowd, during which time we became fast friends with numerous patrons, mostly through a single glance but sometimes by taking a photo or exchanging a few words. We were most indebted to our newest best friends who joined our table shortly before we left, a group of three young German men out to enjoy a couple of gallons of brew. When Suzy discovered one of her diamond earrings had fallen out at some point during the day but not knowing if it had been here or somewhere else along our route, one of these decent young gents noticed our searching and on hands and knees found first the backing and eventually the stud itself. After much danke-ing we faded into the sunset, sloshing once again back to our hotel, having made arrangements with our waiter to bring them another round when (if) they finished their first, to be served with gratitude from their American friends. 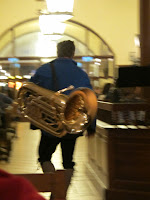 If we could do so, we'd buy Munich and Germany a beer as well, to say thank you and auf wiedersehen for an unexpectedly warm, enjoyable and memorable visit.

And now to our featured attraction. Italy.

Ci vediamo!
Bill and Suzy
Posted by Bill Menard at 3:51 AM

I don't often drink beer, but when I do, I drink BEER.