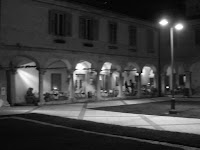 Over the past week we have, as is our habit here in Italy, been eating and drinking our way across the country. From Trento to Riva del Garda to Bassano del Grappa to Maristoca to Capriva del Friuli to Gorizia. From salmon carpaccio to bigoli all'anitra to pork with horseradish to frico to bear. From muller thurgau to grappa del Trentino to aperitivo to tokai friulano. It has indeed been a heck of a week. And that doesn't even include the German portion of our trip. 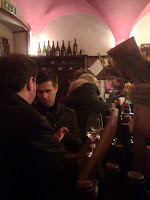 Now I'd like to shift gears a little and talk not about what we've had, but where we've had it. We've always had a preference for the simple restaurants over the fancy, white table cloth variety here in Italy.  Whether they are called trattoria, ostaria, hostaria or something else, the family run, small and simple operation, with its rough wooden tables and paper placemats and its reliance on tradition and fresh, local ingredients over the gimmicky, overly complicated dishes of Italian haute cuisine is a winner every time. 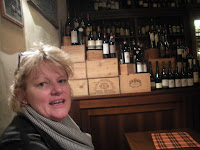 And here in the north of Italy we have found happiness in another form of establishment - the enoteca or taverna. In our home province of Umbria, enoteca (which literally means wine bar) generally connotes a place where you sit down and have a meal along with a wide selection of wines, often by the glass. Here in the north, although they may go by a different name, the enoteca seems to have a different approach. The northern Italian enoteca is a place where you go for a glass of wine, with the food more likely to play a supporting role. The difference is one in degree and focus, and somewhat subtle. The effect is quite different, however. 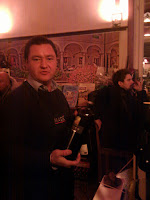 In the enotecas and taverns here in the north we have found a place where we can drop in for a half hour or an hour, sample a couple of different glasses of wine, accompany that wine with a little bite and be on our way. And sample is the key word here. These estabishments are, for first timers like us, a place of education, where you can try out several different wines next to each other to compare their tastes, their bouquets and to see how they match with different foods. Generally in these intimate environments you can strike up a conversation with the owner, the waitress or a fellow patron and get additional insights into the wine, the producer, the winemaking process. In some cases you can talk to the producer himself, as these enotecas can often be the local hangout of those who produce as well as those who consume wine. It is a glorious tradition that has taken deep root here in northern Italy, particularly the wine growing regions we have visited, and is an integral part of the culture here. 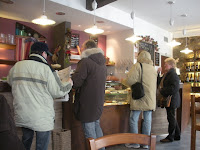 Walking into the often unstructured environment of an enoteca can be a little intimidating for foreigners like ourselves, who are unsure how to order, what to order, where or whether to sit. But we have unfailingly been helped by owners and waiters who clearly love what they are doing and want to share their passion, even with novices like ourselves. In fact, they seem to genuinely appreciate our efforts to get to know their culture, their way of life. 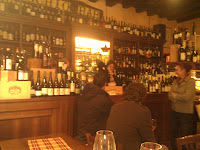 The enotecas we have visited have been spare in their decoration yet rich in atmosphere. Each has been filled with a lively, boisterous crowd, in some cases jammed so full that there is nowhere to sit. The energy and throbbing rhythms of these places, with friends laughing, shouting and enjoying each others' company and waiters darting in and out of rooms have been infectious, impossible to resist.  In contrast to this frenetic energy, dark wooden shelves lined with bottles of dozens of vintages from hundreds of producers. Each bottle its own voyage of discovery, waiting to be chosen, to show off its stuff. There is a sense of possibility every time you step into an enoteca, with every new wine you try. 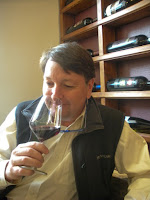 We have had several of those aha moments, or perhaps they were just ahhh moments. A ribolla gialla a couple of nights ago after a particularly tasty friulano, its complete lack of fruit a pleasant shock to the palate after the fruity, floral and acidic friulano. A jolt that has left us seeking out more. Or perhaps last night, a bianco del Collio tasted alongside a tokai (Friulano), showing its lucious complexity, but only after the proprietor talked us through its origins and how it is made. 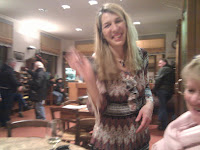 The food experience has varied from place to place. Yesterday's lunch at an enoteca in Cormons was an inspring introduction to some local foods, including frico (a sort of fried cheese and potato pancake) and jota, a bean and cabbage soup typical of this area's  cuisine. At other enotecas we have had thinly sliced prosciutto di San Daniele or just a small bowl of chips and some olives. Regardless of the food served, the accessibility of the wine and the dedication to ensuring its enjoyment has been the centerpiece of the enoteca experience.

The experiences we have had in enotecas in our short week here have truly been memorable and educational. And the enjoyment we have had there has made the difference between a good trip and a great one.

Ci vediamo!
Bill and Suzy
Posted by Bill Menard at 4:15 AM