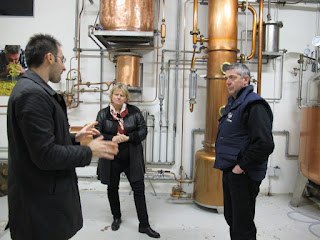 In addition to being the home of Italy's best white wines, northern Italy is also the home of, if not the birthplace of Italy's most famous (or infamous) distillate - grappa. Unlike just about everyone we know, we have been lovers of grappa since our very first first sip.


Just as everyone apparently remembers where they were when President Kennedy was shot (in my crib), my first memories of grappa are as vivid as the day they happened, and not just because my throat still carries the scar tissue from those early days. One of my original grappa memories is of Suzy and I having dinner in Florence with my parents. After dessert, hoping to impress them, we ordered grappa all around and after a minute or so the waitress returned with a bottle of grappa with some unknown organic material floating in it. She poured a sip for everyone, who proceeded to choke it down amid coughing and wheezing. My father, fascinated with the matter in the bottle asked the waitress what had been added to it. She proceeded to charge out the front door of the restaurant to a small flower box from which a tree was growing, bent over and pulled up a handful of grass, returned to the restaurant and held the handful of grass in front of my father. Eccola.

To this day we don't know if it was that grass in the bottle, or the grass was a stand in for some other herb. What matters is that it is entirely possible that she flavored her grappa with the grass from a Florentine sidewalk. Such is grappa.

When planning the itinerary for this trip, our first order of business was to purchase a good map of northeastern Italy. We spent days planning a route and overnight stops that would place us in the middle of areas we wanted to visit. Several towns looked promising - Trento, Treviso, Capriva in Friuli's Collio wine district. What's this? Bassano del Grappa? What a fortuitous sounding name. Let's Google it. "Bassano del Grappa . . . a pretty medieval city . . . famous for its Palladian bridge . . . white asparagus . . . and grappa. Ding ding ding. Sign us up!

We had hoped that grappa was named after Bassano del Grappa or vice versa. Unfortuntately this does not seem to be the case. Bassano was, until recently called Bassano Veneto, only changing its name after World War I to honor those who had been killed in the battle of nearby Monte Grappa, which was also not named for grappa. In fact, the term grappa appears to have been derived from the word grappoli, Italian for a bunch of grapes. So much for romance.

Whether or not Bassano del Grappa is the birthplace of grappa is debatable. What is not debatable is that this is a town that likes to party. We arrived in town in the late afternoon and after circling around the inpenetrable city center (in which our hotel was hidden) a dozen or so times, labarinthinely we found the only route to our hotel - the Albergo al Castello. Suzy thought, from the name, that we were going to be staying in a castle hotel. The proper reading of the name is "the Hotel at the castle," however, not "the hotel in the castle." It might as well be named the "this hotel is not a castle" hotel. Nice. Just not a castle.

What the al Castello did offer, aside from the clean and comfortable room, was a friendly and helpful English speaking hostess and a nice comfortable bar, frequented by local Bassanans. It also offered an outstanding central location, just steps from the main streets and piazzas, and parking, a real luxury in this town.
So off we went just after sunset, to get to know the soul of this town. And arriving in the main piazza we found it. The soul of Bassano del Grappa is in its bars, pubs and taverns. And they are everywhere.
On the main piazza, hundreds of Bassano's youth mobbed two bars, small indoor spaces with standing room only and expansive outdoor seating under a canopy, as well as standing room along the arcaded portico that runs around the piazza. The patrons, whose average age was easily half of ours, stood in pairs or larger groups, sipping orange colored cocktails and being fashionably Italian. We pushed our way to the bar, ordered a couple of glasses of wine (not orange) and did our best to be fashionable. We fell quite short. 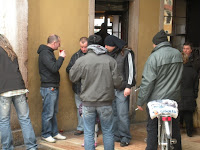 We wandered off from the piazza down toward the river to see the town's second most important sight - the Ponte degli Alpini - a covered bridge designed by Andrea Palladio in the 16th century. Even at 7:30 at night the bridge was packed with people, who were there not to gaze on this famous architectural gem, but rather to visit the town's most important sight - the Nardini tavern located at the entrance to the bridge. Easily a hundred folks stood outside the tavern, massed in groups with each one holding an orange aperitivo, chatting, embracing and generally enjoying life. Inside bartenders dispensed aperitivos and shots of grappa for a couple euros each. By 9:00 the tavern closed and the town's inhabitants were forced to find other places to slake their thirst.

The next morning, before packing to leave town, we wandered back to the bridge to take some daytime photos. Sure enough, at 11:30 on a Sunday morning a crowd was already assembled outside Nardini for an early morning aperitivo. 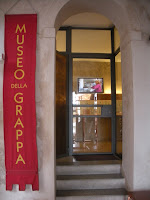 One of our objectives on this trip was not just to drink grappa (although we have), but to better understand how it is made and what makes a good grappa. (It's tough work, but someone has to do it.) So Bassano del Grappa was an ideal place to undertake this research, for in addition to the numerous taverns, Bassano is home of the Museo del Grappa, a museum of grappa established by the grappa giant Poli. The museum itself is a fascinating journey through time, with illuminated manuscripts from the 11th century describing the recipe and the process and ornate machinery filling room after room. A video shows the master grappa maker at work at the stills. I won't bore you here with a description of all that we learned, but the basics are you need fire, copper, glass and grape pomace. Pomace (known in Italian as vinacce) for those not in the know, is basically the leftover grapes, a dried mass of grape skins and seed that remains after the grapes are pressed for wine. We have often seen piles of this residue outside wineries, flies buzzing around them as they wait to be picked up and transported to a distillery in the north. From this humble and not so appetizing beginning grappa is born. 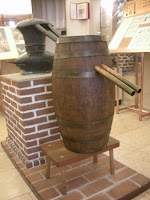 But the making of grappa is far from a simple mechanical process, but rather is an art practiced by a few true experts. Not ony must the grappa maker choose the right pomace for his grappa, the machinery does not simply spit grappa out the other end. As alcohol begins to emerge from the still the grappa maker must use his experience to separate the first liquid, known as the head, from the body of the grappa, and to divert the dregs, known as the tail from it as well. Knowing when and how to "cut off" the head and tail, in a completely closed system, is part of the grappa maker's art. One mistake and the result is disastrous.

This we did not learn so much from the Poli museum as we did in our personal conversations with grappa producers that began days before, far away from Bassano in Trentino. There we visited two grappa producers who uphold the Trentino grappa tradition, something that the untrained eye such as ours would not have been able to distinguish from the Veneto or Bassano grappa tradition. Our first visit was to the large producer Bertagnolli, an industrial sized operation that produces floral, delicate grappas in the Trentino style. Even there, we could tell that there actually is a difference between Trentino grappa and Veneto grappa. 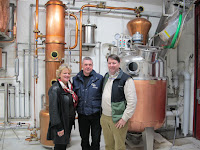 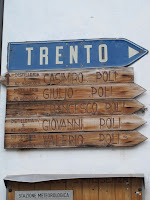 But it was another Poli, Bernardino Poli of the tiny village of Santa Massenza that really opened our eyes to what grappa can and should be. There he makes an artisanal Trentino grappa in a small still in his family run studio. Relying on an expertise he has spent a lifetime acquiring, he purchases only the best pomace (sounds like a contradiction, no?) from suppliers he knows, producing small batches of specialty grappas made from one type of grape or another, flavored with particular herbs, or blended together in his own secret recipe. Bernardino, one of a handful of grappa making Polis in Santa Massenza, wears the perpetual smile of a man who has found true happiness in doing something he loves.

Or perhaps it is just the grappa speaking.

We left Bassano del Grappa behind us, making the two and a half hour drive past Venice to the farthest northeast reaches of Italy, into the Friuli region along the border of Slovenia. Here, for the next five days and nights we hope to experience the excellent wines of the Collio region. But we will not leave Bassano del Grappa or our grappa education behind. We made sure of that by stocking our trunk with almost a dozen bottles acquired along the way. If you can't bring the mountain to Mohammed . . .

Ci vediamo!
Bill and Suzy
Posted by Bill Menard at 7:48 AM