Gotta say it. We really like Trentino. I know it is extremely superficial to make such sweeping generalizations based on a couple of days' experience  and a limited number of personal encounters. But to us (so far), Trentino is the best possible combination of Italian charm, warmth and taste (both stylistic and culinary) and German/Austrian efficiency, cleanliness and purposefulness. Getting that combination right is fortuitous. It could have turned out like Hell in the famous joke
("In Heaven the cooks are French, the police are English, the lovers are Italian and it is all organized by the Germans. In Hell the police are German, the waiters French, the lovers English and it's all organized by the Italians"). Sometimes things just work out right. 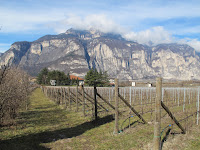 Before landing here a couple of days ago we hardly knew that Trentino existed. We had booked a hotel in the center of the town of Trento, as it looked like a good base for a couple of days driving around the Lake Garda area and to the north toward Bolzano. We had done as much internet research about the local wines and wineries as we could, and our hotel had suggested a few wineries for us to try as well. On the maps this area appeared to be Alto Adige, the vague way we had always referred to this region when talking about places in Italy we had never visited. But from the moment we stepped out of our car, at our first stop at a winery in Faedo, about 15 minutes north of Trento, we were told that we were in Trentino, not Alto Adige. 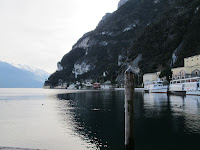 Apparently this region, Trentino-Alto Adige, consists of two parts, Alto Adige to the north and Trentino, here in the south. The Germanic influence is palpable, and until just after the war much of this region was part of Austria. This can be seen in our hotel room, the Ferrari suite which celebrates the local Trento prosecco producer G. Ferrari & Co., a turn of the century publicity photo of which hanging in our room, proclaims "G. Ferrari &  Cie.  Trento (Autriche)" (Trento - Austria). Along the highway, signs are in Italian and German and the names of the towns, the shops and the wines have a German sounding names (traminer, Kerner, Sylvaner, Muller-Thurgau). On our visits to wineries, the proprietors have shifted seamlessly between Italian and German. And at our new favorite winery the proprietors are a Trentino husband and his German wife.

But this is a good marriage, one that results in beautiful, well behaved children. Because Trentino, for all its natural beauty, is a place of great manmade beauty as well. The tidy piazza duomo in Trento is laid out with a beautiful romanesque-gothic cathedral, the square precisely surveyed and regular, with a gleaming stone pavement, perfect arcade and clean, inviting shops and caffes. Traffic runs quietly and without too much congestion - a world away from the cacaphony of Rome or Florence. Here there is a pervasive calmness that belies the high level of artistic and economic achievement. It is a Type A culture that does not appear to be running too fast or trying too hard. No wonder it is, as we were told by some proud local residents, the town rated as having the highest quality of life in all of Italy. I have not been able to verify this claim through research, but my gut tells me it might just be true. 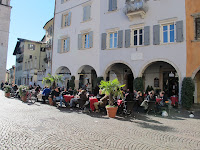 Printers speak of the border between images or layouts as "bleed," noting that even in the precise world of publishing there are no such things as sharp, perfectly defined borders. We have found that to be the case in this wonderful border area, in which the best of Italy and Germany combine. Bleed seems like too harsh a word, and so negative. We leave Trento after too short a visit, hoping to come back soon and searching for the word that describes this lovely intermingling.

Ci vediamo!
Bill and Suzy
Posted by Bill Menard at 5:31 AM

Bill, you are a poet at heart. Lovely descriptions and I cannot wait to hear more. I feel as if I have visited Trentino with you and Suzy! Keep it coming!

German efficiency with Italian charm - what a winner!