Lest our posts give the impression that life in Italy always runs according to script, that each morning we rise, eat a sumptuous breakfast as attendants give us neck rubs and wash our feet, glide effortlessly to our first appointment with nary a missed turn,
to be met by a beautiful Italian woman who leads us on a tour of her award winning winery conducted in flawless English (and with a sexy voice), sit down to a five course all truffle lunch in a historic castle as wild boars playfully chase one another through the garden outside, relax on a terrace imbibing our friend's private stock of prosecco and nibble on his hand cut prosciutto and antipasti as we listen to his neighbor, an art history professor at the University of Bologna speak to us about the early works of Michaelangelo and the sun fades behind the rolling hills, be greeted by the owner of a historic trattoria, our destination for the evening's dinner and enjoy a meal of local dishes suggested and specially prepared by him, before returning to our elegantly appointed hotel room (after two grappas) and fall into a deep, peaceful sleep, before rising and starting this cycle all over again.

No, life has a way of intruding on fantasy. Even in Italy, the birthplace of la dolce vita.

No complaining here. Our visits to Italy do contain nearly all of these idyllic elements. It's just that they don't always happen together. And often the interruptions and unexpected disasters and deviations outweigh the delights. But if you believe, as we do, that life is a journey and that it is the journey itself that matters, not the destination, you might just be able to trick your mind into believing that every day is like the fantasy you want it to be.

Work has a nasty way of intruding into la dolce vita. I can recall a visit to Tuscany a dozen years ago, when I was still working as an associate in my old law firm. I had managed to carve out two weeks of vacation with Suzy and the four kids, as well as another couple and their children. We rented a fabulous villa near the Maremma and made daytrips in our two rental vans, returning back to the villa at night to have dinner in the old estate's private restaurant, the menu having been agreed to in the morning before our departure. Indeed a lovely memory.

It takes more conscious recall, bordering on hypnotherapy to recall the absolute frenzy I was in on several occasions during that trip, as my release from work had not been total - a client back home "needed" me to revise some contracts before my return home. These revisions were accomplished easily enough using the laptop computer I had brought with me (back then laps must have been much larger or stronger, for this portable computer was the size of a microwave oven). The problem or difficulty, in those early days of the internet era, was how to email the revised file back home. In the countryside, an area with pre-war (Franco-Prussian war) analog telephone lines, email was not the Starbuckian sure thing that it is today. Back then I used to carry a separate suitcase with modems and filters, Italian phone plugs and adaptors just for such an occasion (today that suitcase is crammed with phone and computer chargers, electrical adapters, computer cables, SIM cards and flash memory). But despite all my best efforts, the phone line at the villa would not support an email transmission (nor would the owner's house or the restaurant), so as wifey, kids and other family visited the beautiful piazza degli miracoli in Pisa, enjoying the tower and baptistry, I spent the day walking from newsstand to photo store to bar, begging to use their phone line for a short telephone connection to the US. Nothing arouses suspicion like an American in Italy asking to connect his computer to a stranger's telephone line for a "piccolo trasmissione." Hours later, the file was sent. Although it was an unpleasant day for me, no permanent damage was done. My kids still speak to me. (Wife, on the other hand, has her moments.)

Next time you watch a Hollywood movie, take notice of how the protagonist always finds an empty parking space directly in front of where he wants to go. In fact there are always several spaces so he doesn't even have to parallel park.

Life is not always so kind.

Just the other day during our visit to Trieste we wanted to visit the main Piazza Unita d'Italia, in front of which runs the main avenue facing the bay. This is a stretch of road and a small neighborhood which I can today map out with my eyes closed, as we were caught in this infinite loop looking for a parking space for nearly a half hour. The problem with this particular road configuration, a problem common throughout Italy due to their creative, somewhat unusual sense of urban planning and traffic control, is that upon failing to find a space near the Piazza, one is forced to drive about a mile north before being allowed to loop back and re-enter the traffic pattern. It is like a missed approach on an airplane, only faster and much more dangerous.

And don't even get me started about driving in Florence, where I am convinced the Italians have developed some sort of force field that prohibits cars from piercing the city's chewy center. I swear that on more than one occasion I have turned off the meandering ring road that circles the city center, making a mad dash toward the center, only to have my vehicle bounce off this shield and end up back in the cool eddy of the ring road. It had become so bad that one one occasion I spent hours the evening before our assault on Florence, into the wee hour of the morning, doing internet cartographic research, studying and memorizing the one secret entrance through the city's defense system to our central hotel. To this day we will stay nowhere but the Pierre Hotel, at least in part because I know how to drive there.

But the biggest granddaddy driving story has to do with my children's granddaddy and the day we killed our rental car. I believe I have written previously about the first time we chose the "fai da te" lane at an Italian gas station. Fai da te means do it yourself, or self service, as opposed to the normal full service lane. Although this was years ago, we had visited Italy plenty of times already and I was ready, or so I thought, to fill 'er up myself. While the filling and paying operations went flawlessly, the bucking of the car a few kilometers later was evidence that the choice of fuel type - regular instead of the very necessary diesel - did not go so well. So granddaddy and daddy ended up pushing the car up the exit ramp toward the toll booth as gracious Italian families waved their encouragement to us with one or two fingers (it was difficult to see exactly, as they passed so quickly so as not to distract us).

The special lunch that we had originally planned with my mother and father that day had, unfortunately, to be postponed. We did, however, enjoy a wonderful pizza by the slice, topped with hotdogs.

My point is not to bellyache about all the disasters, mistakes and little flubs we have been party to or responsible for during our travels in Italy, although I certainly could go on. The point is that even the most dreadful disaster need not be and in fact is not a disaster at all (at least given a little time). These momentary challenges are the stuff that memories are made of, the shared experiences that give highlight and contrast to the perfectly executed. They make the good better and stand on their own as good in themselves.

After all, in the end we did see Trieste (loved it), delivered my draft to my cient (never read it), saw Florence (fell in love with it) and made it to Locanda dell'Amarosa with my parents (in a new rental car). To this day the photograph of the two of them posing in the garden there, smiling a smile that could only be possible given the difficulties we had overcome the day before, is one of my most cherished memories of them and our time together. 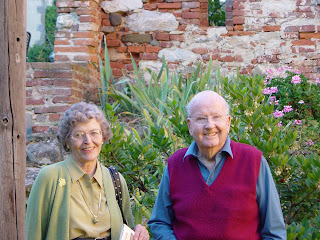 Perhaps this is what is meant by la dolce vita.

Ci vediamo!
Bill and Suzy
Posted by Bill Menard at 6:14 AM

This was a wonderful post. Thanks for putting your travel experiences in perspective. The photo of your parents brought a tear to my eye, knowing how close you were to your mom and still are with your dad.