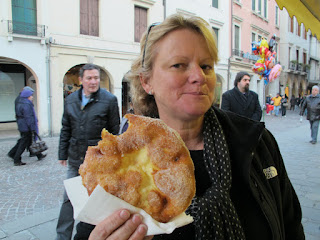 Today is the last of our two days in Treviso, a sort of mini Venice without the gondolas,
situated about an hour's drive from Venice on a vast plain that stretches from the edge of Friuli to the sea. We have spent a relaxing couple of days here, particularly yesterday, a sun drenched Saturday with large crowds wandering the streets and choking the squares. The crowd appears to be younger than usual, however, and dressed in costume, for this is Carnevale time in Italy and the weekend has brought out a flood of children in costume.
We, too, are preparing for Carnevale, as we are about to depart for three days in Venice, the highlight of which will be Sunday's costume ball at the Daniele Hotel.

But back to our brief visit to Treviso. Did I mention that we're going to Carnevale in Venice? 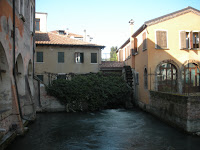 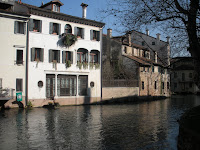 It would be somewhat difficult to keep focused on the present and not think ahead to Venice if Treviso weren't so gosh darn interesting. It is a small, compact town, built above a river, with rushing canals cut through the town and running underneath its buildings. Near the canals one can hear the rush of water, giving the town a sense of peaceful calm which is augmented by its meandering streets and tidy buildings. It is a wealthy looking town, with fashionable inhabitants, high end shops and magnificent private residences. It is an appealing locale which, as has been the case with all of our stops, is one we wish to return to. 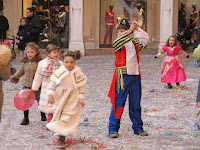 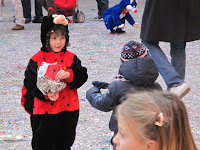 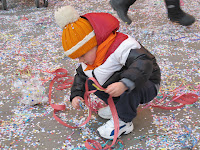 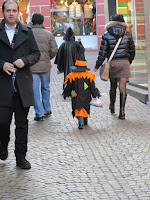 The main piazza in Treviso is the Piazza dei Signori and we seem to be drawn to it every time we wander about Treviso's streets. It has a couple of nice outdoor cafes and some magnificent civic architecture, including an immense vaulted portico that has been glassed in and converted into a cafe. On Saturday it is alive with activity as children are parading in their Carnevale costumes, thowing paper confetti and squirting silly string, chasing and sword fighting with one another and generally having a wonderful time. It is enjoyable to watch the children and their parents, some engaged in their children's fun and games, others smoking a cigarette or talking on their cellphones, completely oblivious to the goings on around them. 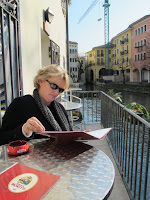 We wander away from the main square toward the pescheria, an open fish market that is built on a small island in the narrow river that runs through this town. By now it is Saturday afternoon and the market, if it was open at all during the day, has long since closed. But the area around the market is lively and full of small cafes, bars and restaurants. We are just a few minutes too late for a seat at a nice looking restaurant, but around the corner we find a small bar with sandwiches and with the added bonus that it has a small terrace with a couple of barstools and tables overlooking the river. It is a peaceful refuge for an hour or so as we have a drink and a bite, a hallmark of life here in Treviso and in this region in general. 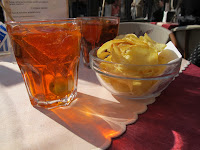 Cicchetti and ombra is a way of life here in the Veneto. Cicchetti are little plates or hors d'oeuvres that are served in bars or cafes and are accompanied by an ombra, literally meaning a shadow, which is typically an aperitif or glass of white or sparkling wine. This grazing - stopping off for a quick cocktail and snack - is not the norm in other regions of Italy, but it is universal here, partaken in by all ages. So when in Treviso . . .

We spend our day nibbling on cichetti and working our way across Treviso bar by bar, enjoying the social atmosphere at its many watering holes and seizing the opportunity to try a number of different white wines which the region is know for, as well as the ubiquitous spritz, a lightly alcoholic aperitif (it is also referred to here as an aperitivo) made from the bitter orange liqueur Aperol, some prosecco and water. Along the way we take in some beautiful sights, some friendly conversation and some beautiful images of families with their children.

As we approach the end of our second week on the road, the first phase of our trip is drawing to a close. It was our goal to visit northeastern Italy, an area that we had never visited before. For the past weeks we have covered Trentino, Friuli and now the Veneto, spending time in Trento, Bassano del Grappa, the Collio and Treviso. When we originally planned our trip we intended to skip Venice, having spent several days there last April, but the allure of Venice during Carnevale was too tempting and just days before our departure we added three days in Venice to our itinerary, only recently nailing down details of what to do and how to rent costumes. As our arrival in Venice has drawn closer, our sense of anticipation has grown and as we head off to Venice this morning we are truly excited for what lies ahead. But it is with a sense of sadness that we leave Treviso, in many ways a town like Venice, and one which has filled us with sweet memories and a desire to return in the near future.

Ci vediamo!
Bill and Suzy
Posted by Bill Menard at 4:06 AM

I'm hoping there will be LOTS of photos of the Carnivale ball!!!

During the procedure the dentist said two words you definitely don't want to hear - "mio Dio"!

Fortunately Suzy had plenty of grappa as anesthetic!

It is always impressive to consume something as large as your head!

It would be even more impressive if it was as big as our tummies!