Several days ago, I posted my definitive guide to grappa, having visted the purported birthplace of this semi-toxic beverage. Thank you to alert reader Jeff Gilleran of Alexandria, Virginia (apologies Dave Barry) for pointing out a grievous omission to my story.


Jeff and I travelled to Italy together in 2006 at which time I pretty much introduced him, or at least shamed him into drinking copious quantities of grappa. Smitten with this clear cure all, Jeff proceeded to explore and research grappa, the result of which was the following scholarly missive which he penned to his adoring fan club (which person has subsequently severed his friendship with Jeff). In addition, the definitive Italian food pyramid (la piramido del cibi italiani) was born.

Without permission to reprint, and frankly not so much caring to seek it, I gladly reprint Jeff's work below and ask that all complaints be addressed to him.


Buona sera. As some of you know, Bill used to toil by the billable hour as a lawyer at a large lawfirm in Washington, DC. I too am a lawyer and worked with Bill for a few years at the firm. Suzy, Bill and myself have traveled together from time to time, and after I read his journal on one of the past trips to Italy he and Suzy took, I "suggested" that perhaps he could use an assistant on one of his trips, to keep him on the straight and narrow.

Foolishly, Bill took the bait, and so I have found myself on a most memorable trip to Italy. I was quite busy at work before our trip and did not have much time to plan anything. Bill, thankfully, is a great guide and host and planned a trip that had sufficient structure to make sure we accomplished what he needed to accomplish but enough room for us to let the winds take us on an excursion or two each day. Our motto has been to hope for the unexpected and make the most of it.

As Bill mentioned, our lunch in Deruta turned out to be a fortuitous one. The stupor brought on by our steak indulgence (again, we beg forgiveness of St. Francis) stirred up a thought by me of what the Italian food pyramid would look like. I grabbed Bill’s placemat (mine already destroyed by the meal), took out my trusty blue felt pen (KP, no laughing) and drew what I labeled "Italian Pyramid de Food 2006." [Italian is not my first language. Nor my second, third … you get the drift.] Here, for those of you who have seen the pyramid, is my annotated version: 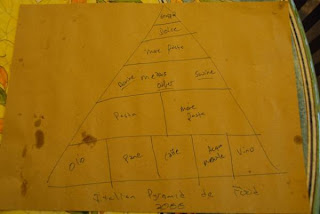 Level One: At the base are the basic staples of the Italian diet: Olive oil, bread, coffee, mineral water and wine. I doubt any Italian would disagree. It is "not possible" to have a meal in Italy without these basics.

Level Two: The next level of the pyramid is reserved for pasta. In my vino-induced fog, I divided this level into "pasta" and "more pasta." Somehow, this seemed correct at the time.

Level Three: The carne, the meats. Bovine and swine are elemental, but there are other meaty products one encounters in Italy. Some are familiar – pollo (chicken), for example – but others are not something the typical American is likely to have eaten. I ask, has anyone eaten "Lamb’s plugs"? "Lamb’s guts"? And if you have, will you admit to doing so? We found these tasty treats on a menu one night, though neither of us had the courage to try them. So for these and other curious meat products I labeled one portion of this level "other." Can you think of anything better?

Fifth Level: Reserved for "dolce," to encompass the many sweets and cakes Italians eat at the end of many meals. It is a tradition I find most cultured, though my stomach has said enough with the chocolate, tiramisu, biscotti, cake, crème de café, etc. As has my waistline.

Sixth Level: Finally, we get to the apex, the most important part of the pyramid. This final level is reserved for grappa. As Bill mentioned, numerous Italians have told him that grappa "is important" and cannot be missed at the conclusion of a meal. While I have had grappa in the past, I confess that before this trip I thought of it as a rocket fuel whose appeal I did not understand. Eight or nine meals later, I now understand the importance of grappa. Given the size of our meals, the grappa helps with the digestion, provides a nice topping, and allows for multiple toasts. What more could you ask for?