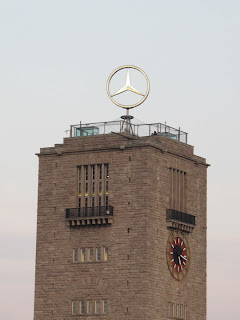 Mein Gott! Never would I have imagined that I would restart the chronicling of our Italian adventures from Germany. But this morgen as we landed in fog shrouded Munich, our five week adventure, most of it to be spent in Italy, began in earnest. Or perhaps in Ernst.


Why Germany? On its face and in my mind, Germany could not be a more perfect foil for Italy. Everything that Italy is, Germany isn't. And everything Germany is, Italy isn't. The quintessentail olio and wasser. But after a brief layover and flight delay, we were on our way to Stuttgart, eventually taking more time to fly the final leg than we could have driven. How inefficient. How un-German.

Stuttgart, you see, is the home of Mercedes Benz and the Mercedes factory in nearby Singelfingen is our destination tomorrow, to pick up a new car that we bought through Mercedes' European Delivery Program. More on that later. For today our limited agenda consisted of sampling German beers and eating zeppelin-shaped meat products. A contest to find the best wurst, as it were.

And what a surprisingly comfortable and welcoming place Germany has turned out to be. Although we packed an armada of luggage stuffed with cold weather gear fit for an Antarctic research expedition, as we drew closer to Stuttgart the cold fog of Munich cleared into a beautiful, nearly warm day. After checking into the lovely Graf Zeppelin Hotel we were given a walking itinerary past the old and new castle and the main town square that would eventually lead us to a highly recommended restaurant for lunch. When asked what type of restaurant we were looking for and replying "local," the woman at the reception desk lit up and told us that the Ochs'n Willi was just what the doctor ordered (fortunately the doctor had not yet heard of cholesterol). She said that it was the most important restaurant in Stuttgart for local cuisine. You have to love it when local food conjures up adjectives such as "important."

A nice stroll down the Konigstrasse, an extremely wide pedestrian-only street, past a number of good department stores and other, not so nice stores, drenched in warm sunshine and nearly shirtsleeve temperatures and finally we were at "the cube," a (not surprisingly) cube-shaped modern building housing a museum which was our landmark to find Ochs'n Willi. At that point we thought about asking for directions, but as our German vocabulary consists of only as many words as there are German automobile manufacturers we decided to make at least a token effort at finding it. Sure enough, down a wide alley was a sign reading Ochs'n Willi. Now I don't know much German, as I just confessed, but I can still safely guess that there are not two establishments by the name of Ochs'n Willi. 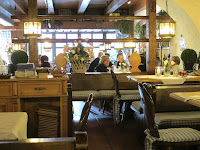 We entered the restaurant, which from the outside looked as though it may be closed save for a chalkboard listing the day's specials on the walkway outside (this is usually a good sign that an establishment is, in fact, open, or that the management is very forgetful and not good with details, such as taking the menu board in at night). As we pushed the door open, it was apparent that Ochs'n Willi was very much open for business, for despite the late lunch hour half of its fifty or so tables were occupied. We had the fortune of getting a young waitress who spoke good English, as our first pass through the menu yielded not a single word, other than tomatten, that we could understand. Fortunately we found an English translation in the back (in Italy we liken an English menu translation to Kryptonite - stay away - but here it was of great help). But being able to read the menu items still didn't tell us what we wanted to know and this is why our waitress proved to be so helpful. 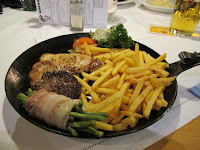 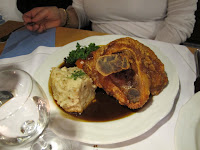 "What do you recommend?" Four of the most important words you can utter in a foreign restaurant. And recommend she did, with vigor, especially when we clarified that we wanted her to recommend something local and something she liked. I had the grillfannle, medallions of pork and beef pan seared in herb butter and seasoned with giant peppercorns, served with a bundle of green beans wrapped in bacon and fries. The whole mess was served in a cast iron pan. What a way to have a country introduce itself to you! Suzy had the riesenhaxe, secret German code for a crispy grilled pork leg, aptly described on the menu as a "giant leg of pork" because it was, well, giant. It was crispy as well. In fact, crackin' crispy. The menu spoke of the pork being "low fat" but it had a richness that seemed to expose that nonsense for what it was. The pork was served with a side of semmelknodel, a "dumpling" that looked like a tower of mashed potatoes but was actually a soft, mild bread-based dumpling. A white cabbage salad, slightly acidic from its vinegar rounded out the lunch. Our hotel receptionist had done her job. We had a lovely first impression of Germany through its food, making friends with our waitress and enjoying the warmth of this beatiful tavern and coming to realize that maybe Germany and Italy were not so much oil and water. (That would be the Germans and the French.)

After lunch we wandered back to the hotel by way of a little outdoor cafe on the main platz, enjoying another German beer and then back to the hotel for a little nap to start the recovery from our jetlag. A little into the nap we were interrupted by drums and whistles on the street below, the beginning of a protest march which we later found out was in opposition to a plan to tear down and replace the main train station which is in front of the hotel. The demonstrators were many, probably numbering several hundred, and were obviously having a good time. Their marching band could have used a little more practice, but such is the life of a protester.


So here we sit, nearly ten thousand kilometers from where we started our day yesterday, a world away in terms of language and custom, but not feeling all that disconnected or out of sync. Quite the contrary, a little food, a lot of beer, a few kind smiles and enthusiastic recommendations always make us feel at home, whether they come from home or from Italy or even from Germany. Danke Deutschland for a very nice start to our affair. We can't wait to see the results of your engineering and manufacturing tomorrow.